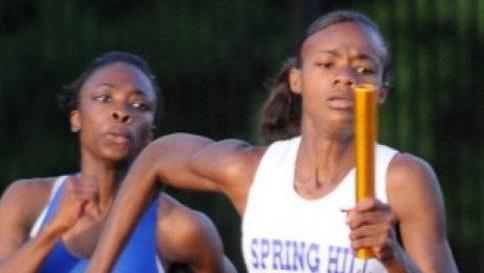 BATON ROUGE – Future Lady Tiger sprinter Aliyah Davis went out with a bang in her prep career at Longview’s Spring Hill High School as she was crowned the Texas Class 3A state champion in the 100 meters and the state silver medalist in the 200 meters for the 2012 University Interscholastic League State Track & Field Championships held in Austin last weekend.

This year’s UIL State Track & Field Championships returned to Mike A. Myers Stadium at the University of Texas with meets for Class 3A, Class 4A and Class 5A being held on Saturday.

Davis scored 21 of her team’s 30 points on the afternoon, as she led Longview Spring Hill High School to a fifth-place finish in the final Class 3A team standings at the 2012 UIL State Championships.

Davis first stepped onto the track for the 100-meter final on Saturday with the No. 2 seed time in the field at 11.93w set at the Texas Region 2-3A Championships just two weeks before.

After taking her mark in Lane 5, Davis fired out of the blocks as she took an early lead just 30 meters into the race and never looked back in taking home her first Texas Class 3A state title in the 100-meter dash in a seasonal-best wind-aided run of 11.77 seconds. She held off a late surge by West Oso’s Akeyla Mitchell to strike gold as Mitchell followed in second place with a time of 11.83w.

Davis followed by shattering her lifetime PR in the 200-meter final, as she won the Class 3A silver medal for the second year in a row with a career-best wind-legal run of 23.89. This time, it was Davis claiming a runner-up finish to Mitchell (23.84) in the race for the Texas Class 3A 200-meter title.

Davis, who lined up Saturday with the No. 1 seed time in the field at 24.50w in claiming the Region 2-3A crown, smashed her previous PR of 24.03 that was set in the state final just one year ago in winning a first career state silver medal in the event in 2011. With her run of 23.89 on Saturday, Davis earned the No. 13 national ranking in the event with the No. 5-ranked 200-meter time in Texas for the 2012 season.