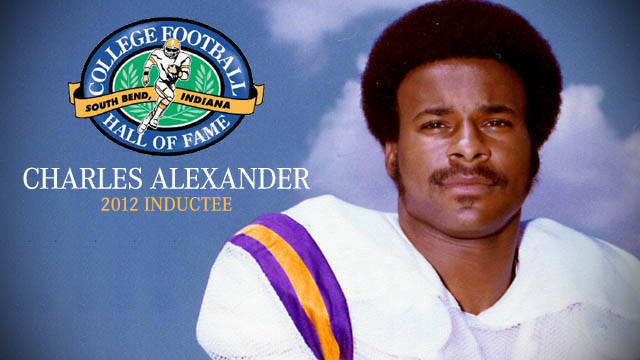 BATON ROUGE – Charles Alexander, a two-time All-American and Heisman Trophy finalist who played at LSU from 1975-78, has been named to the prestigious College Football Hall of Fame, it was announced by the National Football Foundation on Tuesday.

One of the greatest running backs in the history of the Southeastern Conference, Alexander etched his name in college football history during a four-year career from 1975-78.  Known to LSU fans as “Alexander the Great,” he earned All-America honors in 1977 and 1978 while finishing ninth in the Heisman Trophy race as a junior and fifth in the balloting his senior season.

“This is an important recognition for one of the legendary figures in LSU athletics history,” LSU Vice Chancellor and Director of Athletics Joe Alleva said. “This honor is one of the most significant and prestigious honors in all of sports and one which is well-deserved.  Charlie played an important role in LSU football history and the University congratulates him on this tremendous honor.”

Before there was Herschel Walker or Bo Jackson, there was Charles Alexander.  The MVP of the Southeastern Conference in 1977, he set nine SEC records and tied for another.  At the end of a stellar career that included a pair of All-America and All-SEC honors, his name sat atop 27 LSU records. In two bowl games, he was responsible for 330 yards.  He rushed for more than 150 yards on nine occasions and twice topped the 200-yard mark during his LSU career.

Alexander still holds the school records for most rushes in a game (43), most yards in a season (1686) and most yards gained per game in a season (153.3).  He was selected with the 12th pick in the first round of the 1979 NFL Draft by Cincinnati and played in Super Bowl XVI.

He later served as a development officer for LSU’s Tiger Athletic Foundation and is now a successful businessman in Houston, Texas.

The Tigers participate in a video shoot as the 2022 season draws closer.
Swimming and Diving Senior Day Tribute