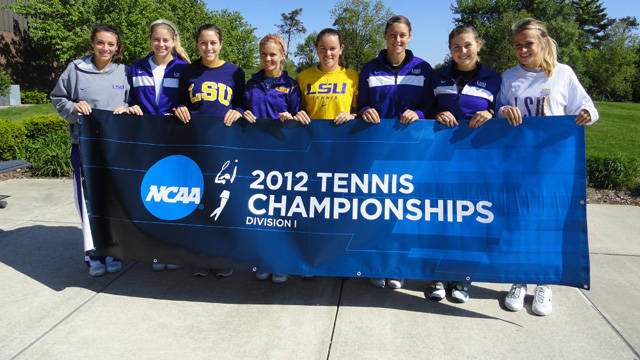 ANN ARBOR, Mich. — The LSU women’s tennis team will take on No. 19 Texas A&M in the NCAA Tournament First Round on Friday at Michigan’s Varsity Tennis Center beginning at 9 a.m. CT.

“We are very excited about the opportunity to compete in the NCAA Tournament,” LSU head coach Tony Minnis said. “Texas A&M is a very good team. They have had a nice year. We played a very tough schedule this season so hopefully that will benefit us going into this matchup.”

Whitney Wolf and Keri Frankenberger have won two-straight doubles matches. The duo owns a team-best 12 victories this spring playing exclusively on court one.

Frankenberger is tied with Olivia Howlett for the team lead with 11 singles victories on the dual match season.

Ariel Morton has won two-consecutive singles matches, and four of her most recent five.

LSU is making its 16th all-time NCAA Tournament appearance, with 15 postseason trips coming under Minnis’ direction. The Lady Tigers return to the NCAA Tournament for the first time since 2009 when LSU advanced to the Round of 32.

The Lady Tigers’ 15 Tournament appearances over the last 18 years is the most of any SEC West school during that period.

LSU is one of nine SEC schools to reach the NCAA tournament along with No. 2 Florida,No. 6 Georgia, No. 8 Alabama, No. 16 Ole Miss, No. 23 Tennessee, Arkansas, Vanderbilt and South Carolina.

The winner of the match between LSU and Texas A&M will face either No. 15 national seed Michigan or the University of Illinois-Chicago in second round action on Saturday.

For the latest updates and information follow the Lady Tigers on Twitter @LSUwten and at www.Facebook.com/lsuwten. Live stats will be available at www.lsusports.net/livesports