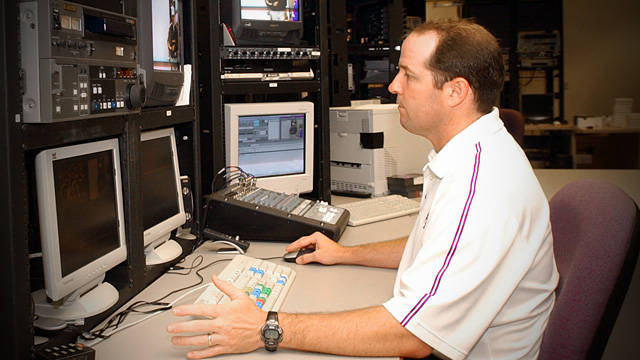 BATON ROUGE – LSU videographer Doug Aucoin has been named the video coordinator of the year in the Southeastern Conference, the College Sports Video Association announced.

Aucoin shares the award this year with Andy Wagner of Arkansas. Aucoin and Wagner were selected in a vote by their peers in the SEC. Aucoin is now a finalist for prestigious Bob Matey National Video Coordinator of the Year, which will be announced on May 17.

“Doug’s service to football and what he provides to our staff on a daily basis in invaluable,” LSU coach Les Miles said. “He’s a visionary when it comes to technology and his approach has helped give us a competitive advantage as we prepare each week. Doug and his staff work long and hard in what most of the times is a thankless job. Doug and his staff are very deserving of this honor.”

Aucoin is assisted by Brad Mendow and graduate assistant Alex Barras along with six students. In addition to filming all LSU practices and games, Aucoin and his staff are responsible for managing the computer network in the LSU Football Operations Building, which allows the coaches to self-scout and scout the opponents.

Aucoin and his staff also produce the weekly highlight and motivational video for the football team during the fall.