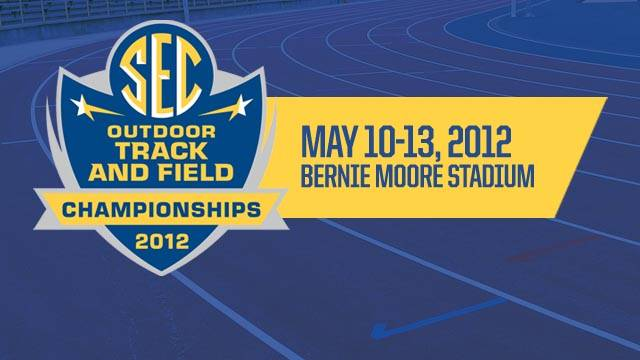 BATON ROUGE – The Southeastern Conference Outdoor Track & Field Championships return to the LSU campus for the first time since the 2000 season as the Tigers and Lady Tigers kick off the postseason on their home track as they host this year’s event beginning Thursday at the Bernie Moore Track Stadium.

This marks the ninth time in the program’s history that the LSU Track & Field teams will play host to the SEC Outdoor Championships as the meet kicks off Thursday with the start of the men’s decathlon and the women’s heptathlon beginning at 3 p.m. CDT at Bernie Moore Stadium.

The four-day meet will continue Friday and Saturday before this year’s SEC Outdoor team champions are crowned in an award’s ceremony following Sunday’s championship finale at approximately 6:45 p.m.

Tickets remain on sale for the championship as “all-sessions” tickets are available for $20 for adults and $10 for youths that provide admission for each day of the championship on Friday, Saturday and Sunday. Individual tickets can also be purchased for each day of the meet for $10 for adults and $5 for youths. Admission for Thursday’s multi-event action is free, and all seating at the Bernie Moore Track Stadium is general admission.

Live results from the 2012 SEC Outdoor Track & Field Championships will be provided by Delta Timing and can be found online at www.deltatiming.com. Fans can also follow the Tigers and Lady Tigers competing throughout the meet by liking LSU Track & Field on Facebook and following @LSUTrackField on Twitter.

The Southeastern Conference will also tweet results for the event at @SECSportsUpdate. Fans are invited to join in the discussion throughout the meet by using the Twitter hashtag #SECTF.

ESPN3.com will feature a live video stream of the SEC Championships on Saturday afternoon from 4:30-7:15 p.m. and on Sunday from 3-7 p.m. CDT. ESPNU will also air a two-hour tape-delay broadcast of the championship as part of the network’s coverage on Wednesday, May 23, beginning at 7 p.m.

The No. 2-ranked Lady Tigers have an opportunity to cement their dominance of the SEC by taking home a fifth team title in six seasons from the SEC Outdoor Championships as they look to defend the crown they won at Spec Towns Track in Athens, Ga., last spring. They are actually the two-time defending team champions after claiming SEC Outdoor titles in 2007, 2008 and 2010.

The No. 9-ranked Tigers have been on the cusp of adding an SEC title of their own in recent seasons after earning three runner-up finishes in their last five appearances at the SEC Outdoor Championships in 2007, 2008 and 2010. They have also earned a third-place finish in 2009 and a fourth-place finish a year ago at the conference meet. They hope to snap a 22-year drought on their home track this weekend by capturing their first team title at the SEC Outdoor Championships since the 1990 campaign.

As is the case each season, the SEC Championships will feature many of the premier programs for college track and field as seven men’s teams and five women’s teams enter the weekend ranked among the top 25 in this week’s U.S. Track & Field and Cross Country Coaches Association power ranking.

The Tigers will battle such conference contenders as No. 1 Florida, No. 6 Arkansas, No. 11 Ole Miss, No. 12 Mississippi State, No. 13 Auburn and No. 19 Georgia in a race for the men’s team championship.

The Lady Tigers will defend their team crown against the likes of No. 4 Florida, No. 11 Arkansas, No. 19 Tennessee and No. 21 Georgia in the race for the women’s team championship.

LSU has enjoyed tremendous success at the SEC Outdoor Track & Field Championships over the years as the Tigers have captured 22 outdoor conference titles in their history and the Lady Tigers have claimed 12 team titles all-time to rank No. 1 among all women’s programs in the Southeastern Conference.

Four athletes will have an opportunity to defend the SEC individual titles they won in Athens, Ga., during the 2011 season as they look to lead the Tigers and Lady Tigers once again this weekend.

Senior Barrett Nugent has the opportunity to step into history as the first LSU Tiger to capture three event titles in the 110-meter hurdles as he lines up at the SEC Outdoor Championships this weekend as the two-time defending champion following back-to-back wins as a sophomore in 2010 and as a junior in 2011.

Only two other Tigers in history have won consecutive SEC Outdoor gold medals in the sprint hurdles, as Jim Gilliland (1941-42) and Larry Shipp (1974-75) won two titles in the 120-yard hurdles. The SEC’s last hurdler to win three-straight league titles was South Carolina’s Terrence Trammell from 1998-2000.

Hackett is the returning SEC Commissioner’s Trophy winner as she led the Lady Tigers to their team title a year ago as the top individual point scorer of the meet. She also earned All-SEC honors with her runner-up finish to Duncan in the 200-meter dash to score 20.5 points during the event.

Stowers also made history as the first Lady Tiger freshman to be crowned the SEC Outdoor champion for the 100-meter hurdles when she ran her wind-legal personal record of 12.88 seconds in the final.