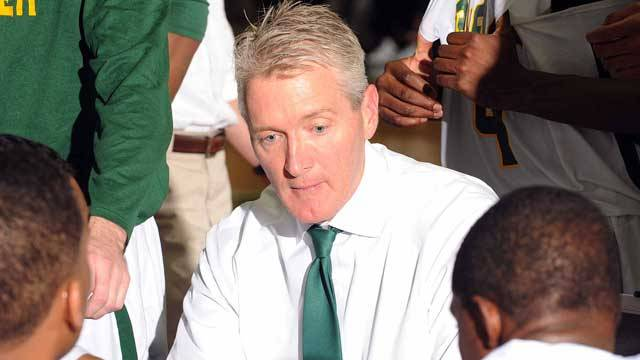 Coach Jones and Kelsey worked together in 2000-01 when Jones was an assistant with Kelsey on Mark Gottfried’s staff at the University of Alabama.

Kelsey has served as head coach at Belhaven for the last seven seasons, advancing this past year to the NAIA national tournament in Kansas City.

Kelsey posted a record of 137-115 in his seven years at Belhaven, advancing to the national tournament on two occasions.

“We are excited to have Coach Tom Kelsey joining us here at LSU,” said Coach Jones. “He’s been successful at every stop in his college career as either an assistant or as the head coach, having a positive impact and influence on the program. He is highly organized and will be a great asset to our program here at LSU serving as our Director of Basketball Operations.”

Prior to arriving at Belhaven, Coach Kelsey served as the head men’s basketball coach at Greater Atlanta Christian School in Norcross, Ga., where he compiled an overall record of 47-40, and led the Spartans to three straight appearances in the state playoffs. In 2005, his team finished with a #7 ranking after compiling a 21-10 overall mark and advancing into the Final Eight of the State Tournament.

From 1998-2001, Coach Kelsey worked as an assistant coach at Alabama under Mark Gottfried. During his three seasons at Alabama, the team advanced to the NCAA National Tournament (2000) and the NIT Tournament (1999, 2001). The 2001 squad played in the NIT championship game, en route to compiling an overall record of 25-11.

From 1995-98, Coach Kelsey served as an assistant for Coach Gottfried at Murray State University. In each of his three seasons at Murray State, the Racers finished as the Ohio Valley Conference (OVC) regular season champions, winning the conference tournament in 1997 and 1998. The 1996 squad advanced to the NIT, while the 1997 and 1998 teams played in the NCAA Tournament.

Coach Kelsey served as an assistant coach at Lipscomb University (1994-95) in Nashville under Hall of Fame Coach, Don Meyer. The 1995 team finished with a 30-7 overall record and advanced to the Final 16 of the NAIA National Tournament.

From 1989 to 1994, Kelsey served as Athletic Director and Head Men’s Basketball Coach at Faulkner University in Montgomery, Ala. During his time at Faulkner, Coach Kelsey compiled an overall record of 83-76 and was named the NAIA District 27 “Coach of the Year” (1992). The ’92 squad finished 27-6 (school record) and was the District 27 regular season and tournament champions.

Additionally, Kelsey has served on the coaching staffs for Athletes in Action (Summer 1990), Franklin Road Academy in Nashville, Tenn. (1988-89) and Brentwood Academy in Brentwood, Tenn. (1987-88).

A native of Chattanooga, Kelsey is a 1986 graduate of Lipscomb University, where was a four-year member of the Bison basketball team. He was a part of the 1985-86 #1 ranked Lipscomb team that won the NAIA National Championship, following the team’s 35-4 season.

Kelsey holds a Bachelor of Arts degree in Speech Communication from Lipscomb and a Masters of Education in Supervision and Administration from Tennessee State University.

He and his wife Edie have been married for 22 years, and have five children (Hadley, Brynne, Elise, Mikailie, and Brookly’n ).