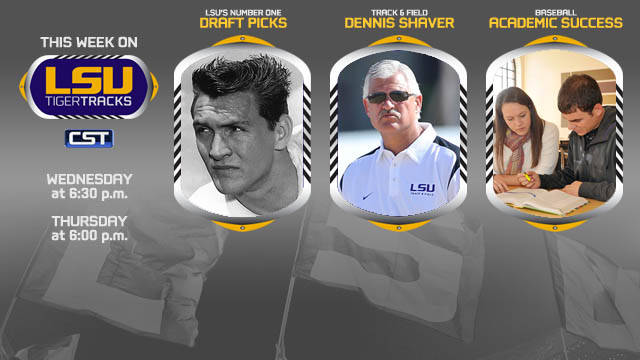 BATON ROUGE — This week’s edition of LSU Tiger Tracks, a program highlighting various aspects of the university and its athletic department, can be seen at 6:30 p.m. Wednesday and 6 p.m. Thursday on Cox Sports Television.

LSU Tiger Tracks opens with a profile by correspondent Garrett Walvoord on the LSU student-athletes that have been No. 1 overall draft choices in their respective sports, beginning with football All-American Billy Cannon in 1960.

The show continues with a visit from track and field coach Dennis Shaver, who previews next week’s SEC Championship Meet that will be held at LSU’s Bernie Moore Stadium May 10-13.

LSU Tiger Tracks concludes with a feature on the academic achievements of the fourth-ranked LSU baseball squad, which enters this weekend’s series at Ole Miss tied for first place in the SEC standings.