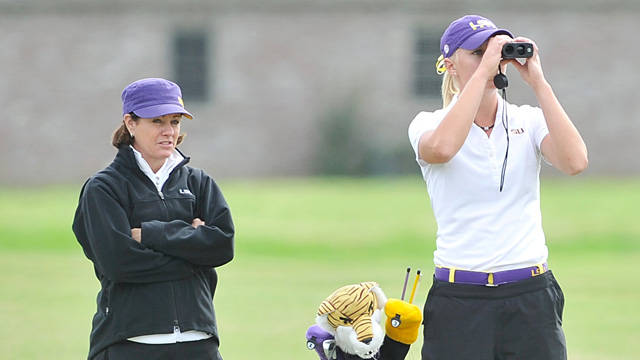 BATON ROUGE – The LSU women’s golf team, ranked sixth in the National Golf Coaches Association poll and seventh in the latest GolfStat performance rankings, has received an invitational to the NCAA West Regional tournament as the second seed slated for Erie, Colo., May 10-12.

The 54-hole tournament will be conducted over the Colorado National Golf Club with the University of Colorado the host team. The Buffaloes will be the fourth seed in the regional.

This marks the 18th time in the 20 years of NCAA regional competition that the Lady Tigers have advanced to the NCAA field of now 72 teams. Only in 1994 and 2003 did LSU not advance to NCAA regional play.

The top eight teams in each of the three regional competitions (East, Central, West) will advance to the NCAA Division I Women’s Golf Championships, May 22-25, at the Legends Club of Vanderbilt in Franklin, Tenn. LSU has advanced from regional play nine times, including two of the last three years, and 11 times overall since the program began in the 1979-80 school year.

Last year, the Lady Tigers had their best ever NCAA finish, taking third place just eight shots behind winner UCLA. Then freshman Austin Ernst shot two rounds of 6-under 66 in the 72-hole event to finish at 7-under par 281 to become the first LSU women’s golfer in history to win the individual national championship.

Last season, LSU finished second behind UCLA in the Central Regional at the Warren Golf Course in South Bend, Ind., easily advancing to the national championship.

UCLA and LSU will be paired again this year with the defending champs the No. 1 seed in the West Regional ahead of LSU with North Carolina the third seed. After Colorado, is Pac-12 champion California, with Baylor sixth, West Coast Conference champion Pepperdine seventh and Big West champ UC Davis rounding out the top eight seeds in the 24-team field.

“I had tried to map things out and thought we would be put in the West Region,” said LSU Coach Karen Bahnsen after the Monday night NCAA.com selection show. “We are excited about it. I am checking the weather, but it will be fine as long as we don’t have to deal with snowflakes. I am very pleased. It’s a very strong field. There are a lot of good quality teams. We just need to get ready and play three good rounds of golf and move on to nationals.”

This will be the third time in four years that LSU has been placed in the West Regional.

In all 72 teams were selected to the three regionals along with 16 individuals whose teams did not advance. A total of 45 teams that did not win conference tournaments were selected at large.

Eleven of the 12 SEC teams advanced to regional play and Tulane from Conference USA was named as the 12th seed in the East Regional to be held at the Penn State Golf Course. The Central Regional will be held over the Scarlet Course in Columbus, Ohio.