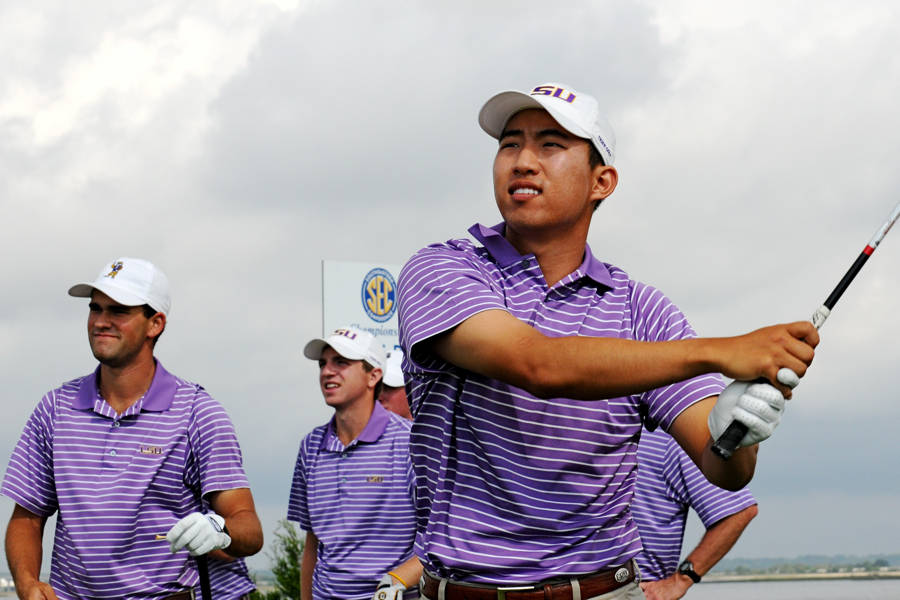 BATON ROUGE – Senior Sang Yi solidified his All-America candidacy on Monday afternoon when he was honored as a First-Team All-SEC performer for the first time in his career, while sophomore Andrew Presley earned a Second-Team All-SEC honor as a leader of the LSU men’s golf team this season.

This marks the fourth-straight season in which an LSU golfer has earned First-Team All-SEC recognition, as Yi follows former Tiger stars John Peterson (2009, 2011) and Andrew Loupe (2010, 2011).

The duo has led the No. 23-ranked Tigers to another successful season in 2011-12 as the squad has earned three tournament titles for the fourth-straight season while posting a strong 73-38 overall record in college competition as it awaits a selection to the NCAA Regionals being held May 17-19.

The Tigers have won at least three tournament championships for the fourth year in a row as they are now the reigning champions at the Louisiana Classics (March 5-6), Argent Financial Classic (March 11-13) and LSU National Invitational (March 31-April 1) held this spring.

A senior from Carrollton, Texas, Yi is LSU’s 33rd First-Team All-SEC selection since 1970 as he ranks as one of the premier performers in all of college golf for the 2011-12 campaign.

Yi is the team’s leading scorer on the season with a career-best 71.93 scoring average in 31 rounds played that ranks No. 10 on the SEC’s scoring list for his senior season. He has also set career highs with his four top-five finishes and seven top-10 finishes in 10 tournament starts on the year, which includes a collegiate best second-place finish with a career-low 7-under par 209 at the Louisiana Classics.

Yi entered postseason play with an impressive run of five-straight top-10 finishes for the spring campaign as he teed off at the 2012 SEC Men’s Golf Championships on April 20.

A native of Fort Worth, Texas, Presley has recorded a career-low 72.48 scoring average in his 10 starts on the campaign to rank among the Top 20 scorers in the SEC. Among Presley’s two top-five and four top-10 finishes this season was his first collegiate victory at the Louisiana Classics, where he had a career-low 54-hole score of 10-under par 206 en route to a three-shot victory over Yi.

Presley’s victory at the Louisiana Classics earned him the selection as the SEC Men’s Golfer of the Week on March 8. He opened postseason play with four-straight top-10 finishes to his credit.

Both Yi and Presley rank among the Top 50 players in all of college golf in the latest Golfweek individual rankings as Yi ranks No. 38 and Presley ranks No. 42 in the current Golfweek/Sagarin Performance Index released on Thursday of last week. Each is sure to receive All-America consideration for their efforts.