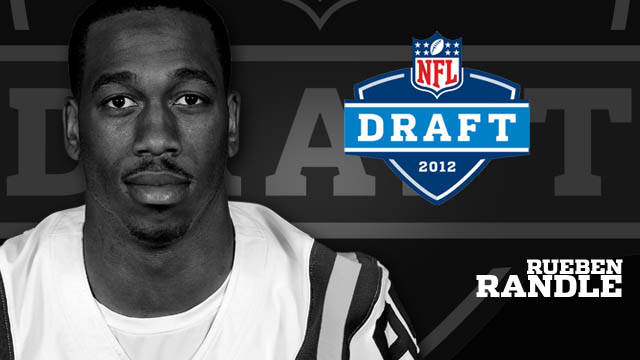 Randle brought the hometown fans to their feet, chanting his name when Strahan announced him as the 63rd overall pick by the Super Bowl champion New York Giants at the 2012 NFL Draft on Friday night in Radio City Music Hall.

Safety Brandon Taylor was the other Tiger taken on the second day of the draft when he got the call from the San Diego Chargers in the third round with the 73rd overall selection.

Randle was the final pick of the second round, becoming the highest drafted LSU wide receiver since Dwayne Bowe and Craig Davis were both taken in the 2007 first round. The Tigers have now had at least one wide receiver selected in six of the seven drafts under coach Les Miles, who greeted Randle before he walked on stage.

“Eli Manning is a great quarterback,” said Randle. “A lot of guys will help me develop my game and get better. You just have to stay humble. I knew my opportunity was going to come. You can’t stress about that. It’s about what you do after you get drafted. I am going to go out there and work hard for these guys and hopefully make the team.”

Taylor, who wore the honorary No. 18 jersey at LSU, will join a former No. 18 Tiger running back in Jacob Hester in San Diego. LSU is one of only two schools in the draft to so far produce multiple defensive back selections.

Since 2006, the Tigers continue to lead the Southeastern Conference in NFL Draft choices with 41. That total also ranks second nationally. Currently, LSU and Southern Cal are the only two schools to produce at least 40 draft picks dating back to 2006, the year of the first draft under Miles.

The final day of the 2012 NFL Draft featuring rounds four, five, six and seven gets underway at 11 a.m. CT Saturday on ESPN, NFL Network and NFL.com. It could be a busy day for several LSU players who are expected to be taken, including cornerback Ron Brooks, linebacker Ryan Baker, tight end Deangelo Peterson and offensive lineman Will Blackwell.

On Saturday, Miles will serve as a guest analyst for the NFL Network for the fourth and fifth rounds. Miles, who will be on set for three hours that day from 10 a.m. until 1:15 p.m., will join host Rich Eisen, Charles Davis, and Michael Irvin on the NFL Network broadcast.