Claiborne, Brockers Selected in First Round of Draft 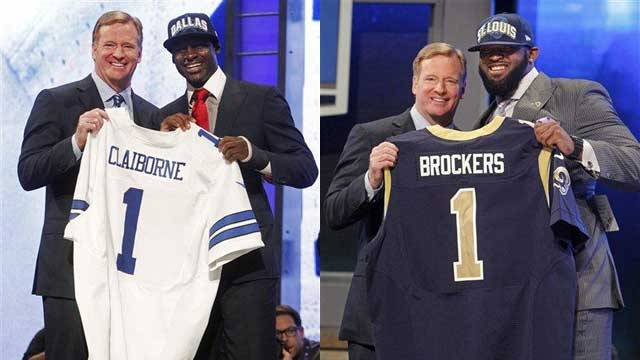 NEW YORK – For the first time since the NFL’s merger in 1970, a single college football program produced the first defensive back selected in consecutive drafts as LSU cornerback Morris Claiborne was taken sixth overall by the Dallas Cowboys in the first round of the 2012 NFL Draft on Thursday night in Radio City Music Hall.

Tigers in the Draft

A trio of top-10 trades gave Claiborne, a Shreveport native, a chance to play three hours from his hometown in Arlington’s Cowboys Stadium. Minutes before he was selected, Dallas received the sixth pick from the Washington Redskins. Claiborne, sitting in the green room with his family, then got the phone call from owner Jerry Jones, who called him “the best defensive player in the draft.”

“They sacrificed a lot to come down to get me, but I feel like I’m worth it,” Claiborne said. “I know my talents. I know I what I’m able to do and I feel like I can come in right away and get with the team, learn the system and compete. It’s a dream come true.”

Claiborne will join former LSU standouts Marcus Spears, Nate Livings and Danny McCray in Dallas. Claiborne is now part of a lengthy list of Tiger defensive backs who were first round draft picks under head coach Les Miles. Last season, Patrick Peterson was the first defensive back taken when he went fifth overall to the Arizona Cardinals. Peterson went on to make the Pro Bowl in his rookie season.

“I couldn’t be happier for Mo,” said Miles, who was on hand in New York. “He’s very deserving of this. He’s a guy that will work long and hard to be the best professional football player that he can be. It also makes me very happy that he went to the Dallas Cowboys. He’s going to look great wearing the star.”

With Brockers’ selection, it’s the fifth consecutive year that LSU has had a defensive linemen chosen in the draft. He’s also the fourth Tiger defensive lineman to be drafted in the first round since 2005. The 6-foot-5, 322-pound Brockers has tremendous upside and versatility. He will join a Rams squad coach by first-year coach Jeff Fisher.

Miles was on the set of the NFL Network’s coverage on Thursday and he joined Claiborne and Brockers in the green room for their selections. Under Miles, LSU has now produced 10 first round draft picks dating back to 2006. Overall since 2006, the Tigers continue to lead the SEC in NFL draft choices with 39 under Miles.

The Southeastern Conference overall had nine players selected in the first round. The SEC record for most players taken in the first round was 11, set in 2007.  The nine is third highest also behind last season’s 10.

Safety Brandon Taylor and wide receiver Rueben Randle can expect to have their names called on Friday when rounds two and three of the 2012 NFL Draft get underway at 6 p.m. CT. ESPN, the NFL Network and NFL.com will all resume coverage.