Talented Set of Tigers Set for NFL Draft First Round 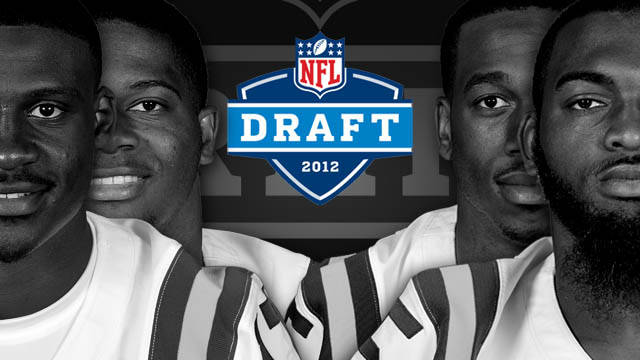 NEW YORK — In what has become a rite of spring, a talented group of LSU Tigers are ready to add to the program’s prestigious legacy of professional draft picks as the three-day 2012 NFL Draft gets underway from New York City’s Radio City Music Hall at 7 p.m. CT Thursday.

The 2012 NFL Draft will be televised live on ESPN, NFL Network and streamed on NFL.com. The first round takes centerstage Thursday night. Rounds two and three begin at 6 p.m. CT Friday, while the remaining four rounds air at 11 a.m. CT Saturday.

Three players have been invited to attend the NFL Draft – cornerback Morris Claiborne, defensive tackle Michael Brockers and wide receiver Rueben Randle. All have participated in promotional media appearances during the week as they make the next steps of their careers.

“We have been fortunate to have eight first rounders since 2006 and we look forward to continuing that on Thursday,” said LSU head coach Les Miles. “We’ve averaged at least six players in the NFL Draft since we’ve been here. Considering we are second in the conference in graduation rate, we feel we are doing great things here. Our men our achieving greatly and I am proud of them.”

Claiborne has been a projected as the top defensive selection since he announced his intentions to enter following the 2011 season. Some projections have the Shreveport native going as high as No. 3 to the Minnesota Vikings while several anticipate him going No. 5 overall to the Tampa Bay Buccaneers.

“My family and I are excited to be here for this opportunity,” said Claiborne, who won the Thorpe Award as the nation’s top defensive back. “I always dreamed of this as a kid growing up. I’m just going to take it all in and see what happens when my name is called.”

Claiborne spent Wednesday morning serving as a coach for elementary and middle school students at the NFL Play 60 Youth Football Festival. The NFL encourages students of all ages to exercise at least 60 minutes a day.

Brockers is likely to become the third LSU defensive lineman selected in the first round dating back to 2008 when Glenn Dorsey was taken. The versatile, 6-foot-6, 315-pound prospect recorded 54 tackles, including 10 tackles for loss as a junior. Several mock drafts list Brockers’ selection in the teens.

Randle, who arrived in New York on Tuesday, could become the third LSU standout taken in the first round. Several projections list him going late in the first round to early second round. He is likely to become the highest drafted wide receiver for LSU since Dwayne Bowe was taken 23rd overall to the Kansas City Chiefs in 2007.

Brandon Taylor, Ron Brooks, Deangelo Peterson, Ryan Baker and Will Blackwell could have their names called during the weekend.

Under Les Miles, the Tigers have produced a Southeastern Conference leading eight first-round draft choices. LSU’s had at least one first round draft pick for seven of the last eight years.

As for Miles, he arrived in New York on Wednesday evening and will take part in all three days of the NFL Network’s coverage. On Thursday, Miles will participate in a football roundtable on the NFL Network prior to the start of the first round. Miles will be joined by Stanford coach David Shaw as well as former NFL head coaches Brian Billick and Steve Mariucci as they discuss the draft and other topics related to college and pro football.
On Saturday, Miles will serve as a guest analyst for the NFL Network for the fourth and fifth rounds. Miles, who will be on set for three hours that day from 10 a.m. until 1:15 p.m., will join host Rich Eisen, Charles Davis, and Michael Irvin on the NFL Network broadcast.