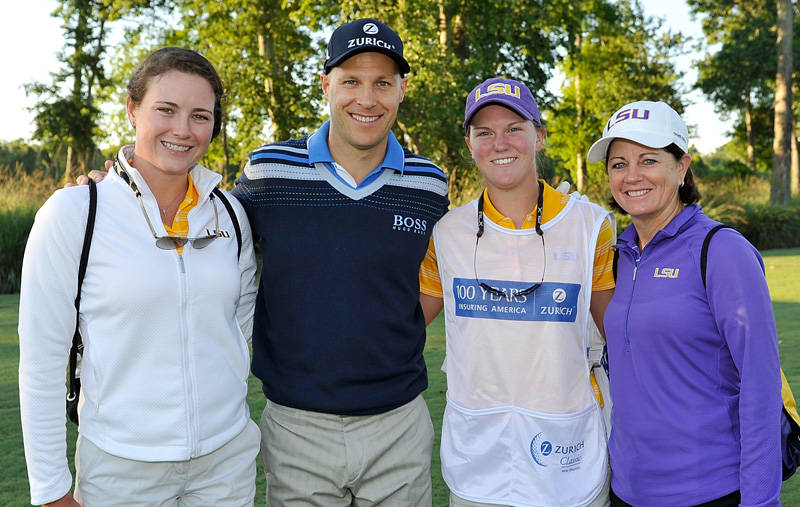 NEW ORLEANS – The nationally-ranked LSU women’s golf team made their annual visit to the TPC of Louisiana to caddy for some of the golfers participating in the Wednesday pro-am prior to Thursday’s start of the PGA Zurich Classic.

Jacqueline Hedwall, Lindsay Gahm and Katrina Hegge were caddying and getting tips on the course from three-time PGA winner Camilo Villegas, while defending NCAA champion Austin Ernst and Tessa Teachman were part of Ben Crane’s group during their pro-am round.

Also with the groups visiting with players and fans were LSU women’s head golf coach Karen Bahnsen and assistant coach and former LSU player Alexis Rather.

The Wednesday trip has become a tradition for the women’s team for the last several years and included one year when members of the team caddied for legendary comedian and well-known celebrity golfer Bill Murray.

The two professional golfers showed some of their yardage book markings, how to play bunker shots and just gave general advice to the players as they went through their rounds.

Some of the players got to try their hand at some shots heading into the massive viewing area surrounding the 18th green before the players signed balls and tournament flags for the team.

The tournament runs through Sunday and will be televised on the Golf Channel and CBS.