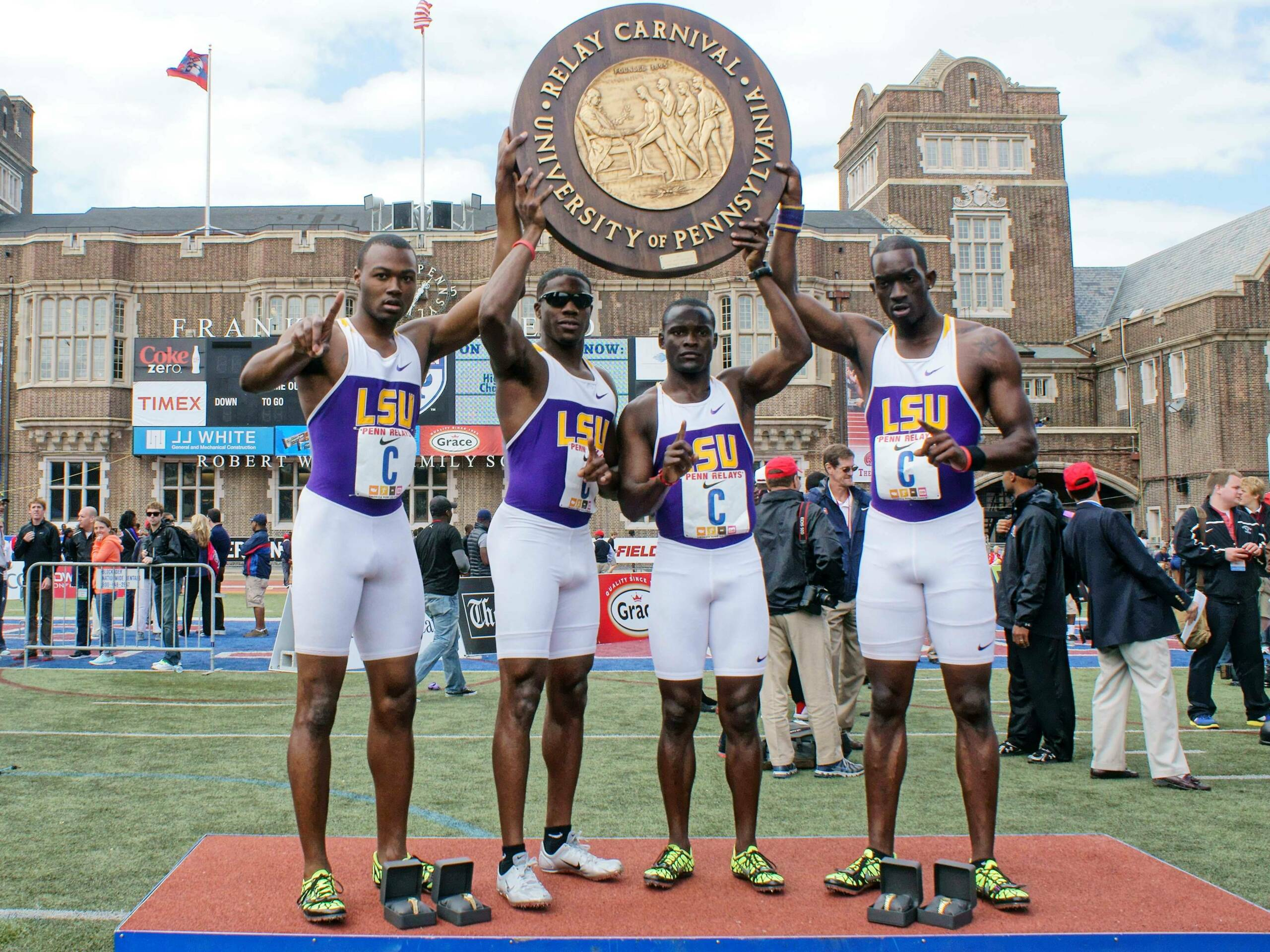 BATON ROUGE – The LSU Track & Field teams will wrap up the 2012 regular season this weekend with their annual trip to historic Franklin Field in Philadelphia as they compete in the 118th running of the Penn Relay Carnival beginning Thursday afternoon at the University of Pennsylvania.

While the Tigers and Lady Tigers will compete for the first time on Thursday, the 118th Penn Relays is set to come to an end with the exciting “USA vs. The World” events on Saturday afternoon.

Saturday’s “USA vs. The World” at the Penn Relays will be the first stop of the 2012 Visa Championship Series and is scheduled for a live nationally-televised broadcast on NBC from 12-2 p.m. CDT.

The 118th Penn Relays will come to an end on Saturday with the running of the Championship of America 4×400-meter relays as the Tigers will run at 4:50 p.m. followed by the Tigers at 5 p.m.

This weekend marks the last time the Tigers and Lady Tigers will have the chance to compete before they open the championship season by playing host to the 2012 SEC Outdoor Track & Field Championships at the Bernie Moore Track Stadium in Baton Rouge from May 10-13.

Fans can receive live updates with the Tigers and Lady Tigers competing this weekend at the Penn Relays by liking LSU Track & Field on Facebook and following @LSUTrackField on Twitter. Exclusive interviews with LSU’s athletes and behind-the-scenes video coverage from the meet will also be available on the team’s social networking sites after each day of the competition.

“There’s no doubt that our athletes look forward to Penn Relays weekend each and every year. This is one of the truly unique events in the sport of track and field,” said LSU head coach Dennis Shaver. “The meet just has a different kind of atmosphere than anywhere else we go during the season. It’s electric when you see 50,000 or so in that stadium on Saturday. It’s something you have to experience.

“But we need to treat this event like we would any other championship meet. This weekend means we get one final opportunity to compete before we get ready for the SEC Championships.”

Teams competing at the Penn Relays each season line up with a goal of taking home one of the carnival’s signature Championship of America wagon wheels awarded to each university relay winner.

LSU is among the most successful programs all-time at the Penn Relays as the Tigers and Lady Tigers are winners of 63 Championship of America relay titles and 62 individual event titles in meet history.

LSU is looking to continue an impressive streak as either the men’s or women’s team has won at least one Championship of America relay title in 21-straight seasons dating back to the 1991 season. The Tigers are the defending champions in the 4×100-meter and 4×200-meter relay, while the Lady Tigers have captured five-straight Championship of America titles in the sprint medley relay since 2007.

The Lady Tigers are sure to add to their trophy haul as the most successful program in meet history with a total of 42 Championships of America relay wins all-time at the Penn Relays. They will compete in the first Championship of America relay final with the distance medley relay on Thursday night.

In fact, the Lady Tigers set a pair of Texas Relays meet records in taking the 4×200-meter relay in 1:30.01 and sprint medley relay in 3:43.79 with their national-leading performances.

While the Lady Tigers are strong favorites to win 4×100, 4×200 and sprint medley relay championships at this year’s Penn Relays, they are poised to complete the sprint relay sweep as they also boast the NCAA’s No. 2-ranked 4×400 relay with a seasonal best time 3:30.42 that was also set at the Texas Relays.

One Lady Tiger also has an opportunity to defend the individual title she won at the Penn Relays a season ago as sophomore Jasmin Stowers is the reigning champion in the women’s 100-meter hurdles. She won a close race with a winning time of 13.16 in her Penn Relays debut a season ago.

The Tigers enter the meet with Top 10 national rankings in four relays as they are sure to contend for their share of Championship of America relay titles this weekend.

LSU’s athletes have certainly earned their share of recognition with their performance at the Penn Relays, as nine athletes have taken home a coveted Athlete of the Meet honor.