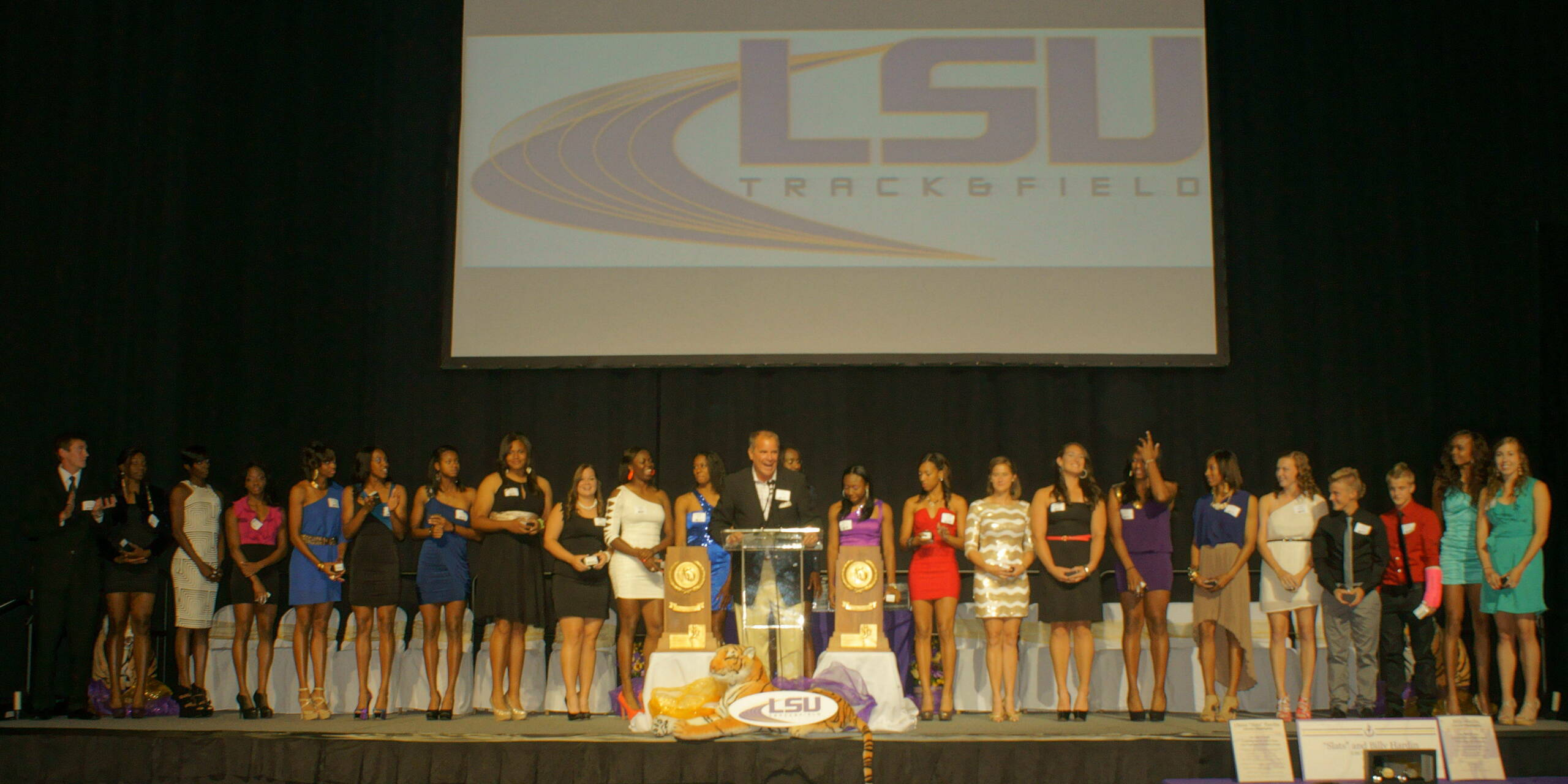 BATON ROUGE – After recognizing the 25th anniversary of the first national championship team for the Lady Tigers, members of the current team were presented their rings for a sweep of 2011 SEC Indoor and SEC Outdoor titles as part of the third-annual LSU Track & Field Team Awards and Alumni Recognition Banquet held Friday night at the Pete Maravich Assembly Center.

The Lady Tigers swept conference titles for the first time since 2008 by taking their 12th SEC Indoor team title in Fayetteville, Ark., and their 12th SEC Outdoor crown in Athens, Ga.

They actually defended their title at the SEC Outdoor Championships a season ago as they have now won the SEC Outdoor crown in four of the last five seasons, including 2007, 2008, 2010 and 2011.

Six athletes were also presented national championship rings during Friday’s banquet after claiming event titles at the NCAA Championships during the 2011 indoor and outdoor campaigns.

Kimberlyn Duncan, Walter Henning and Barrett Nugent were honored with rings for capturing individual national championships a season ago. Duncan swept NCAA Indoor and NCAA Outdoor titles for the 200-meter dash during her sophomore season in 2011, while Henning captured the NCAA Indoor crown in the 35-pound weight throw and Nugent claimed the NCAA Outdoor title in the 110-meter hurdles.

Duncan was also a member of LSU’s national champion 4×100-meter relay squad last season, as Rebecca Alexander, Semoy Hackett and Kenyanna Wilson were honored with their rings as part of the winning team. Unfortunately, Henning and Wilson were not present at the banquet to receive their rings.

The Lady Tigers dominated their competition in the Southeastern Conference last season with their sweep of SEC team titles. They scored a total of 135 points en route to a 17-point victory at the SEC Indoor Championships, before completing the title sweep with 146 points and a 30-point win at the SEC Outdoor Championships for their seventh sweep of team titles in program history.

The Lady Tigers will attempt a “three-peat” on their home track at the 2012 SEC Outdoor Championships as they play host to the event from May 10-13 at the Bernie Moore Track Stadium in Baton Rouge. It will mark their first time since 1987-91 to win three SEC Outdoor titles in a row with a victory.

Before kicking off the championship season at the SEC Outdoor meet, LSU will end the regular season in Philadelphia this weekend with the 118th running of the Penn Relays being held at Franklin Field.