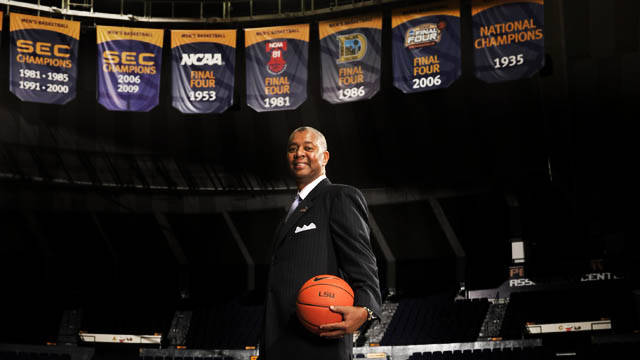 Coleman, who played his high school ball at Thibodaux High School in Thibodaux, La., has played the last two seasons at Howard College in Big Spring, Texas. Coleman is 6-6, 200 pounds.

“Shavon Coleman will be a great addition to our basketball team,” Coach Jones said Monday night prior to his appearance in Shreveport on the first stop of the LSU/TAF Tiger Tour.  “He has a knack for scoring. He is a great defender and he can create other opportunities for the players on the floor with him. We look forward to his competitiveness moving this team forward in the future.”

Hammink, a 6-6, 190-pounder who was born in Baton Rouge, is the son of former Tiger All-SEC center Geert Hammink, who played for LSU from 1989-93. The senior Hammink averaged a double-double his senior year when he was first team All-SEC. Shane Hammink played most recently at the Canarius Basketball Academy in Spain. The Academy is for elite players in Europe.

“We are excited about the signing of Shane Hammink,” said Jones. “It means a lot as a program for us to have a young man whose father had the chance to play for us. For him to allow his son to be a part of our program speaks volumes for what he feels about LSU and our staff. We look forward to the addition of Shane because of his ability to pass, shoot and create opportunities for others on the floor. He has the ability to defend the 1, 2 and 3 spots so with that versatility it will allow us to play a different way and it will bring a lot to our basketball team.”

Coleman averaged 14.7 points and 6.6 rebounds to go with 1.7 assists for his final year of junior college play with 45 steals. He made 44 percent of his field goal attempts this past season. He had 22 points and 13 rebounds in a loss in the Regional V Championship game.

At Thibodaux, he was the District 8-5A MVP and honorable mention Class 5A all-state team member as a senior. He averaged 28 points and 13 rebounds per game as a high school senior leading Thibodaux to the District 8-5A championship.  As a junior, he averaged 20 points and 11 rebounds a game and again was honorable mention all-state. He was a first-team selection on the The (Houma) Courier and (Thibodaux) Daily Comet’s All-Region team in 2009 and 2010.

Hammink averaged 14 points for the Canarius team in a major tournament in Tourcoing, France and was named the MVP. Playing for his home country of Holland and the Nijmegen team in the U18 European championships in 2011, in seven games he averaged 12.7 points, 7.3 rebounds and 2.3 assists per game, while shooting 54.2 percent from the floor from inside the arc.

“It says a lot for the son of one of our former players being the first to commit to this staff,” Jones said of Hammink. “It means a lot to me because of the relationship I have had with Geert (Hammink) through the years.”

Both Coleman and Hammink are expected to be available to join the LSU team for the 2012-13 season. Coleman will have two years of eligibility remaining and Hammink four.