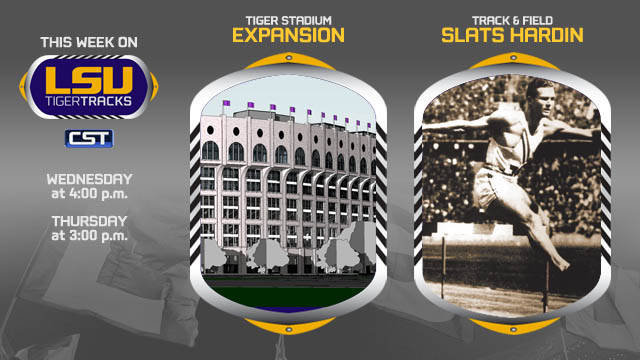 BATON ROUGE — This week’s edition of LSU Tiger Tracks, a program highlighting various aspects of the university and its athletic department, can be seen at 4 p.m. Wednesday and 3 p.m. Thursday on Cox Sports Television.

LSU Tiger Tracks opens with a visit from senior associate athletics director Eddie Nunez, who discusses the planned renovations in and around Tiger Stadium, including the addition of an upper deck above the South end zone.

The show continues with a story about the late Glenn “Slats” Hardin, who led LSU to the 1933 NCAA track and field championship and won the gold medal in the 400-meter hurdles at the 1936 Olympic Games in Berlin. Hardin’s family recently loaned his Olympics medals – he also won a silver medal at the 1932 Los Angeles Olympics – to the Andonie Sports Museum on the LSU campus.