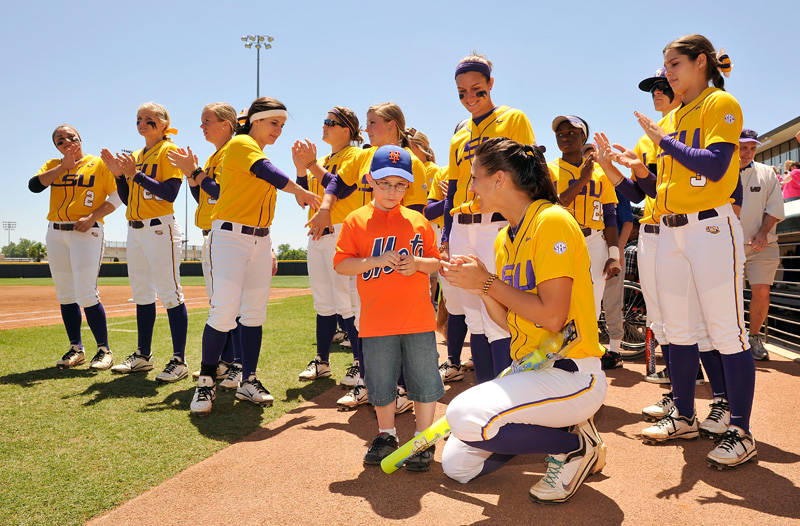 Notes on the Tigers
No. 23 LSU picked up a series win over Ole Miss and maintained its fourth-place position in the overall SEC standings. The Tigers have collected a 29-11 record since February 19 after starting the season with a 3-4 mark. For the season, the Tigers have posted an impressive 167-31 advantage during its 32 wins fueled by 18 shutouts. LSU wore teal jerseys to celebrate survivors and spread awareness during Saturday’s inaugural “Strikeout Ovarian Cancer” event in-front of a season’s best 1,815 fans. Ashleigh Kuhn, whose mother is a 10-year survivor of Cervical Cancer, provided a RBI groundout to break a 1-1 tie during the bottom of the fourth inning. The heroics were set up by an Allison Falcon‘s leadoff single, and pinch runner Alex Boulet‘s back-to-back steals of second and third base. Prior to Sunday’s series finale, children from the Miracle League Association and Baton Rouge schools joined Brittany Mack as her VIP guests as part of “Geaux Play” day at the park. The children were welcomed onto the field with a standing ovation from the 1,645 fans in the crowd. Throughout the entire season at home games, fans have brought new/gently used sporting equipment to donate to the Miracle League Association. Afterwards, the special needs children joined the Tigers on the field for a game. Friday’s series opener was highlighted by Rachele Fico‘s three-hit shutout. The junior right-hander provided seven strikeouts and was touched up for only a trio of singles. Fico has compiled a 15-7 record with a blistering 0.99 ERA for the season. She enters this week’s action 12 Ks away from reaching 500 for her career. Ashley Langoni also set LSU’s single season walk record during Friday’s series opener versus Ole Miss. She notched her 39th free pass of the season to break former All-American Ashlee Ducote’s single-season mark set in 2000. LSU’s seniors led the way during Tuesday’s 2-1 victory over McNeese State. Juliana Santos and Langoni ripped consecutive two-out doubles for the game’s first run in the fourth inning, while Cassie Trosclair contributed a timely two-out RBI single during the fifth inning which proved to be the game-winning hit. Meghan Patterson earned the win in the circle with her second consecutive complete game effort. LSU embarks on another five-game week, all inside the SEC starting with a twin bill at No. 3 Florida [Tuesday – 4 p.m. CDT; Televised by CSS/CST] followed by a weekend series versus No. 12 Georgia [Friday – 6 p.m.; Saturday 4 p.m.; Televised by CST; Sunday 1 p.m.; Televised by CST].