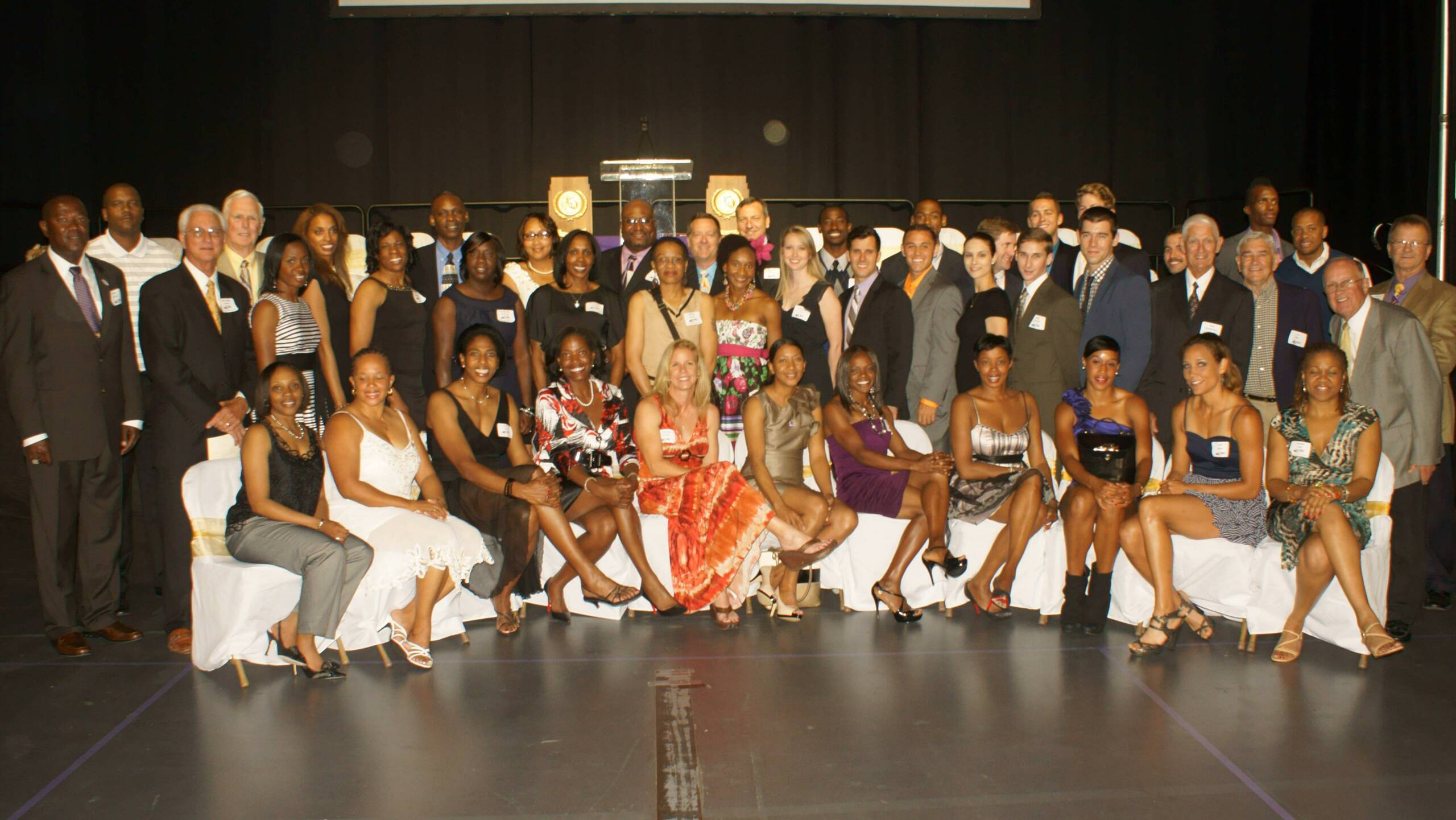 BATON ROUGE – The LSU Track & Field program held its third-annual Team Awards and Alumni Recognition Banquet on Friday night at the Pete Maravich Assembly Center, in which 16 student-athletes received awards for their performance in competition, in the classroom and in the community.

The LSU Track & Field Team Awards and Alumni Recognition Banquet has been established to not only recognize the current members of the program for their performance in the past year, but also honor those alumni who have laid the foundation of success still enjoyed by the program today.

Athletes, coaches, administrators, family and alumni were in attendance in celebration of the great history and tradition of the nation’s premier combined program in all of collegiate track and field.

Also attending Friday’s banquet ceremony was the great Billy Cannon, who not only led the Tigers to the 1958 national championship and was awarded the 1959 Heisman Trophy for his performance as one of the all-time great players in the history of college football, but also captured the 1958 SEC Championship in the 100-yard dash during his career as a member of the LSU Track & Field team.

Awards were presented to current members of the team for their outstanding performance during the 2011 outdoor, 2011 cross country and 2012 indoor seasons in leading the Tigers and Lady Tigers.

“What a tremendous celebration of everything our program stands for here at LSU,” said LSU head coach Dennis Shaver. “We are proud to continue this tradition each year, and are excited with the representation we saw again this year. We just want to thank everyone who helped put this event together this year as we strive to host one of the unique events in our sport. This has really been a lot of fun for us.

“It’s very exciting any time you have men like Billy Cannon and other great alums come back and join us for what has become an annual event. These are some of the biggest names in all of college sports and not just LSU athletics. We’re proud for them to come back and take part in this great celebration.”

The awards portion of the banquet proceeding was capped by senior Barrett Nugent and junior Kimberlyn Duncan taking home the Most Outstanding Performer of the Year awards.

Duncan was named the winner of the Most Outstanding Female Performer of the Year for the second year in a row as she also took home the honor as a sophomore in 2011.

Duncan, who was named a Bowerman Award finalist a year ago, earned distinction as the top point scorer at the 2011 NCAA Division I Outdoor Track & Field Championships. She set the low-altitude collegiate record of 22.24 seconds in winning the women’s 200-meter dash gold medal, while also anchoring the Lady Tigers to a national championship in the 4×100-meter relay and finishing as the NCAA runner-up in the 100 meters to score 20.5 points during the meet held in Des Moines, Iowa.

Nugent was awarded The Glenn “Slats” Hardin Award honoring the Most Outstanding Male Performer of the Year after being crowned the NCAA Champion in the 110-meter hurdles a season ago.

After winning a silver medal in the 400-meter hurdles at the 1932 Olympic Games in Los Angeles, Calif., Hardin won the gold at the infamous 1936 Olympic Games in Berlin, Germany. He remains the only LSU track and field athlete to win an Olympic gold medal in an individual event.

Nugent is a deserving recipient of The Glenn “Slats” Hardin Award this season after capturing the NCAA title in the 110-meter hurdles along with an SEC title and three All-America honors in the past year.

A native of Maurice, La., Nugent became the first LSU Tiger in 23 seasons to win the NCAA 110 hurdles title with his victory at the 2011 NCAA Outdoor Championships following a successful defense of his SEC Outdoor title in the event. He also led off LSU’s 4×100-meter relay squad that achieved All-America status with a fourth-place finish at the national meet a season ago.

Nugent then broke his own school record in the 60-meter hurdles in an All-American performance during the 2012 indoor season as he won the NCAA Indoor bronze medal in the event with a personal-record run of 7.55 at the NCAA Indoor Championships held in Nampa, Idaho, back in March.

In addition to his selection as the recipient of this year’s Glenn “Slats” Hardin Award, Nugent claimed his Eye of the Tiger Award and Most Outstanding Male Track Athlete Award on the evening.