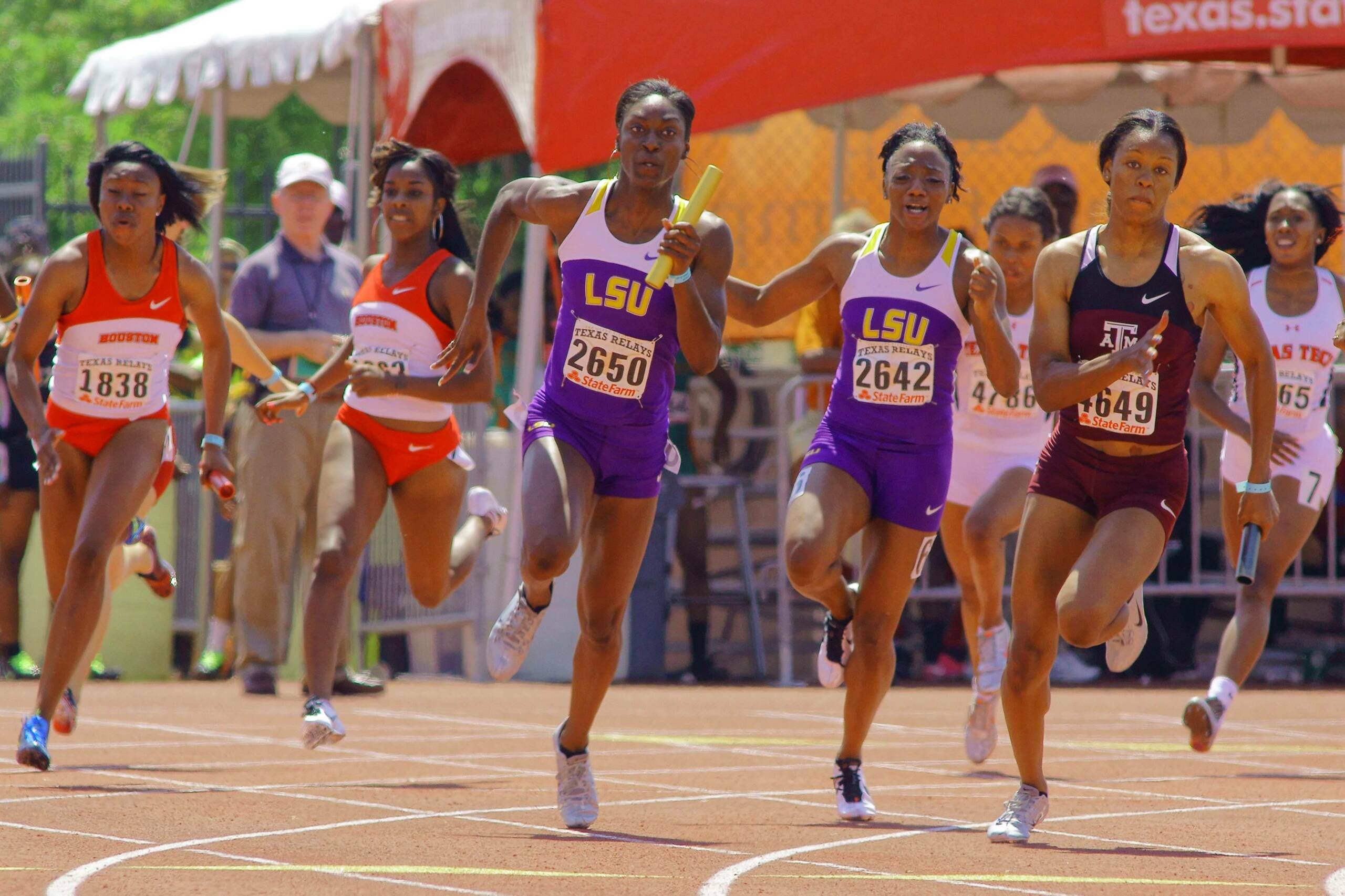 BATON ROUGE – The LSU Track & Field teams will host a star-studded field during Saturday’s action at the LSU Alumni Gold meet as eight Olympians, four World Champions and many of the NCAA’s elite will be in action at the Bernie Moore Track Stadium beginning at 2 p.m. CDT.

The afternoon session of this year’s LSU Alumni Gold is set to begin following an opening ceremony and alumni recognition at 2 p.m. The 4×400-meter relays are scheduled to run at 5:10 p.m.

The LSU Alumni Gold seems to attract a world-class field year in and year out, and this year’s meet is not an exception as many elite college and professional athletes are ready to compete on Saturday.

Four NCAA leaders will be on the track for the Tigers and Lady Tigers as senior Barrett Nugent, junior Kimberlyn Duncan and junior Charlene Lipsey look to remain unbeaten for the outdoor season. The Lady Tigers will also feature their national-leading 4×100-meter relay team as a highlight to the competition.

In addition, five athletes who competed at the 2008 Olympic Games in Beijing are set to compete as they turn their attention to the 2012 Olympic Games in London this summer. Joining LSU alums Neisha Bernard-Thomas of Grenada, Marian Burnett of Guyana and Isa Phillips of Jamaica are Tabarie Henry of the U.S. Virgin Islands and Fabrice Lapierre of Australia in Saturday’s field.

After making his Olympics debut for Australia in 2008, Lapierre captured the World Indoor gold medal in the long jump in 2010. Henry, a fellow Texas A&M alum, is a two-time World Championships finalist on the track in the 400 meters, taking seventh place outdoors in 2011 and fourth place indoors in 2012.

Davis, who won six NCAA titles in two seasons at LSU from 2001-02, represented the United States with the Olympic Games in 2000 and 2004 before claiming the 2005 World Outdoor triple jump title.

Kimmons is the reigning U.S. Indoor champion in the 60-meter dash and a two-time World Indoor finalist in the event in 2010 and 2012. He will race with a personal best of 9.95 seconds in the outdoor 100 meters on Saturday. Felicien is Canada’s most prolific hurdler while representing her country in two Olympics in 2000 and 2004. She is a two-time World Championships gold medalist in the sprint hurdles while earning the crown in the 100-meter hurdles outdoors in 2003 and 60-meter hurdles indoors in 2004.

Saturday’s action also features the reigning World Indoor 400-meter silver medalist and Olympic hopeful Demetrius Pinder of The Bahamas as he is scheduled to run the 200-meter dash.

Fans who are unable to make it out to the Bernie Moore Track Stadium have the opportunity to follow the action by liking LSU Track & Field on Facebook or by following @LSUTrackField on Twitter. Fans who wish to join in the conversation on Twitter are asked to use the hashtag #LSUAlumniGold.

“Hosting the LSU Alumni Gold provides us an opportunity each year to really showcase our team and our program in so many different ways,” said LSU head coach Dennis Shaver. “Since we’ve held our banquet on Friday night before the meet these last few years, this weekend has turned into one great celebration of our program and the history and tradition it has established in the sport of track and field.”

The men’s and women’s 4×100-meter relays will be ready to run beginning at 2:30 p.m. CT following the opening ceremony and alumni recognition to kick off the afternoon session.

The women’s sprint relay will feature the two fastest teams in the NCAA this spring as defending national champion LSU (42.99) and Texas A&M (43.21) will meet for the first time since the Lady Tigers took the Texas Relays championship over the Aggies back on March 31.

On the men’s side, the Aggies feature the NCAA’s No. 2-ranked 4×100-meter relay team this season with a seasonal-best time of 38.84, while the Tigers follow in the No. 10 spot in the NCAA rankings with their best of 39.54 that was also set in the event final at the Texas Relays just a few weeks ago.

While running the anchor leg for the Lady Tigers in the 4×100-meter relay, Duncan will make her outdoor debut in the 200-meter dash on Saturday afternoon as she is the reigning NCAA Outdoor champion in the event. Duncan owns an impressive streak of 14-straight collegiate victories in the 200 meters between the indoor and outdoor seasons as she has already defended her NCAA Indoor crown this season.

While Duncan owns the NCAA’s leading time under all conditions in the 100-meter dash in 2012 with an aided time of 10.94 this spring, senior Semoy Hackett follows with the NCAA’s No. 5-ranked time on the season at 11.16w as she is also set to compete in both 100-meter and 200-meter sprints on Saturday.

Lipsey has also emerged as an NCAA leader for the Lady Tigers with her performance outdoors when she opened the campaign with a lifetime personal best of 2 minutes, 2.91 seconds in taking the 800-meter title at the “Battle on the Bayou” on April 7. She is sure to be pushed to her limits again this weekend as she is set to join Burnett and Bernard-Thomas in one of the meet’s premier events.

Nugent looks to remain unbeaten outdoors in the 110-meter hurdles as he has posted national-leading runs wind-aided (13.37) and wind-legal (13.49) entering his fourth competition of the season.

The reigning NCAA Outdoor champion opened his season by defending his hurdles championship during the Texas Relays, where he clocked his seasonal-best wind-aided time of 13.37 in the event final. He then raced to a seasonal-best wind-legal time of 13.49 at the “Battle on the Bayou” the following week. He has since added to his resume with a win at the Arizona State Tri-Meet a week ago.

This year’s LSU Alumni Gold will come to an end with the running of the 4×400-meter relays that are set to start at 5:10 p.m. as the women will be the first to step onto the track for Saturday’s finale.

The Lady Tigers are the favorites to claim the women’s relay crown as they have already run the NCAA’s second-fastest time this spring in the 4×400-meter relay at 3:30.42. The team of Rebecca Alexander, Tate, Siedda Herbert and Jonique Day set its 2012 best in a runner-up finish at the Texas Relays. They will race against the No. 10-ranked relay team from Texas A&M that has run 3:35.33 outdoors this season.

The men’s relay will feature the No. 3 and No. 4 teams in the NCAA this spring as Texas A&M (3:03.16) and LSU (3:03.20) are sure to battle it out for the event championship. The Tigers posted their season best with Quincy Downing, Caleb Williams, Ade Alleyne-Forte and Riker Hylton.