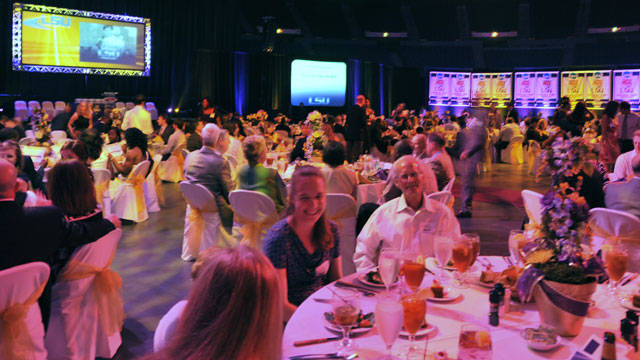 BATON ROUGE – A special recognition of the 25th anniversary of the Lady Tigers’ first national championship team and display of the Olympic medals won by the great Glenn “Slats” Hardin will surely highlight a night of celebration as the LSU Track & Field program prepares to host its third-annual Team Awards and Alumni Recognition Banquet on Friday night.

The banquet will be held at the Pete Maravich Assembly Center as part the LSU Alumni Gold weekend as it kicks off with a social at 6:30 p.m. CDT followed by the dinner and awards program at 7:30 p.m.

Current members of the LSU Track & Field teams will be honored as part of the banquet ceremony based on their performance during the 2011 outdoor, 2011 cross country and 2012 indoor seasons.

“This event provides us with an opportunity to not only honor the performance of our student-athletes this past year, but it also gives us a chance to honor our alumni who have made this program what it is today,” said LSU head coach Dennis Shaver. “It is hard to believe that we’re already hosting our third banquet for our program. We want this event to keep growing well into the future.”

As those in attendance find their seats for dinner at 7:30 p.m., members of the Hardin family will take part in a special ceremony announcing their loaning of the Olympic medals won in 1932 and 1936 by the great Glenn “Slats” Hardin to the Jack & Priscilla Andonie Museum on the LSU campus. Dr. Jack Andonie and museum director Bud Johnson will also take part in the ceremony.

Attending the banquet on Friday as a family friend of the Hardins and fellow LSU Track & Field alumnus is 1959 Heisman Trophy winner Billy Cannon. Not only is Cannon a legend of college football, but he’s a former 1958 SEC champion in the 100-yard dash during his collegiate career at LSU.

Hardin’s Olympic medals will be on display throughout Friday’s banquet as patrons will have a chance to be the first to view these special pieces of LSU and Olympics history.

Hardin emerged on the international stage while winning the silver medal in the 400-meter hurdles for the United States at the 1932 Olympic Games held in Los Angeles, Calif. He then made history as LSU’s first Olympic gold medalist at the infamous 1936 Olympic Games held in Berlin, Germany.

Friday’s banquet festivities will also be used to honor the 25th anniversary of the first team of Lady Tigers crowned national champions as the 1987 swept NCAA Indoor and NCAA Outdoor team titles while laying the foundation for the most dominant women’s program in collegiate track and field.

It is only fitting that LSU Track & Field celebrates the silver anniversary of the first NCAA championship team for a women’s program that has now captured 25 national championships in its history. The Lady Tigers have actually claimed 16 more national championships than the second-leading program in NCAA history as the Texas Longhorns follow with nine team titles all-time at the NCAA Championships.

The 1987 Lady Tigers own the distinction as the first women’s team in collegiate history to win a national championship on their home track as the 1987 NCAA Outdoor Championships were held in Baton Rouge at LSU’s historic Bernie Moore Track Stadium. The Lady Tigers scored a total of 62 points in capturing a nine-point victory over SEC rival and NCAA Outdoor runner-up Alabama.

With their victory, the 1987 Lady Tigers sparked one of the dominating runs in collegiate history, as LSU went on to claim 11-straight NCAA Outdoor team titles from 1987-97.

LSU’s string of 11-straight wins at the NCAA Outdoor Championships remains unmatched by any other women’s program in college athletics. The second-longest national championship run by a women’s team is nine-straight titles by the North Carolina women’s soccer team from the 1986-94 seasons.

“The idea behind this banquet has always been to celebrate the history and tradition that is LSU Track and Field,” Shaver said. “We will certainly have the opportunity to do that again this weekend. We are excited with what we’ve added to the banquet this year and the history that will be represented.”

After hosting the third-annual LSU Track & Field Team Awards and Alumni Recognition Banquet during Friday’s festivities, the Tigers and Lady Tigers will play host to this year’s LSU Alumni Gold on Saturday as the after session is set to begin at 2:30 p.m. following the meet’s alumni recognition and brief opening ceremony at the Bernie Moore Track Stadium.