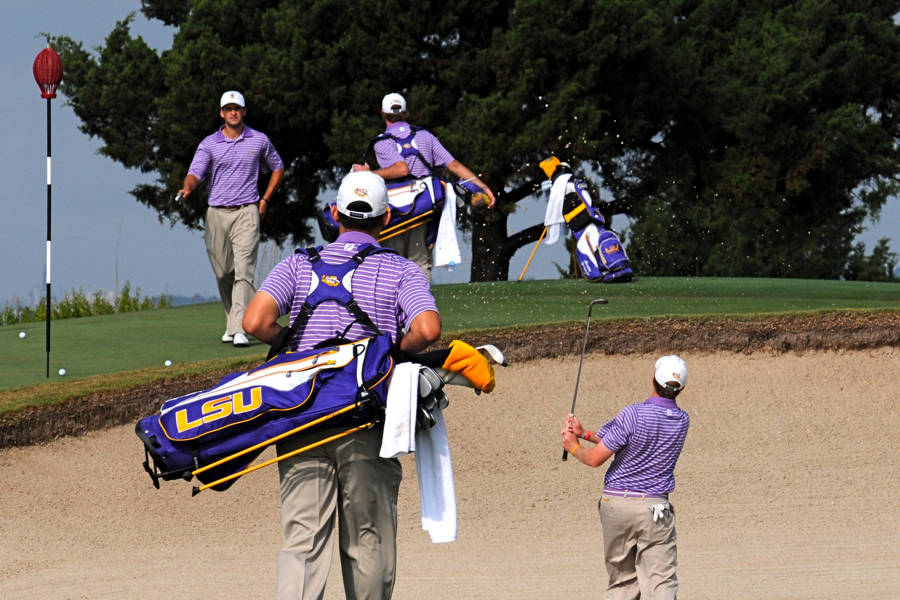 BATON ROUGE – After wrapping up the regular season with three tournament wins in its last four starts, the 17th-ranked LSU men’s golf team is riding a wave of momentum into the postseason as it heads to St. Simons Island, Ga., this weekend for the 2012 Southeastern Conference Men’s Golf Championships beginning Friday at the Seaside Course at Sea Island Golf Club.

The Seaside Course is set to play host to the three-day, 54-hole championship for the 10th time in 12 years as the course will play to a par 70 and 6,657 yards for the weekend.

The Tigers have finished among the top five of the final team standings at the SEC Championship in each of the last three years as they have followed a tie for fourth place in 2009 with back-to-back fifth-place finishes in 2010 and 2011. The Tigers took home a fifth-place finish in the event last year as they posted a 54-hole score of 25-over par 865 at the Seaside Course.

LSU was led last season by three-time All-American and 2011 NCAA Champion John Peterson, who was the SEC runner-up after falling to Florida’s Andres Echavarria in a one-hole playoff. The two competitors tied one another in 54 holes with matching scores of 1-under par 209 for the weekend.

On the strength of Echavarria’s playoff victory, the Gators captured the SEC team title for the first time in eight seasons with their 14th conference crown all-time with their winning score of 8-over 848 in 54 holes. It marked Florida’s first win at the SEC Championships since the 2003 spring season. Alabama trailed the Gators by six shots in the final standings with its score of 14-over 854 for second place.

While claiming tournament titles in three of their last four appearances, the Tigers have earned their place among the Top 20 teams in the country as they open postseason play on Friday.

The Tigers are ranked as high as No. 17 nationally in the latest Golfweek/Sagarin Performance Index that was released Sunday, while they are also No. 19 in the Golfstat Top 25 released Wednesday.

The Southeastern Conference will feature a strong field once again in its championships beginning Friday at the Seaside Course as six programs are ranked among the Top 25 nationally this week.

Joining the Tigers in the Golfstat Top 25 rankings are No. 3 Auburn, No. 8 Alabama, No. 9 Arkansas, No. 22 Florida and No. 25 Georgia. This week’s Golfweek/Sagarin Performance Index features five programs from the SEC in its Top 25 as the Tigers are joined again by the likes of SEC Championship favorites No. 2 Alabama, No. 4 Auburn, No. 9 Arkansas and No. 23 Florida as they prepare to tee off Friday.

This marks the final season in which the SEC Men’s Golf Championships will feature the 12-team format as Missouri and Texas A&M prepare to join the conference on July 1. Rounding out the field this year are Kentucky, Mississippi State, Ole Miss, South Carolina, Tennessee and Vanderbilt.

The Tigers will play alongside Ole Miss and South Carolina in Friday’s opening round as they will tee off on the back nine beginning at 7:50 a.m. CDT. Golfstat will provide live scoring for the tournament, which can be found online at www.golfstat.com throughout the weekend.

The Tigers will carry their share of momentum into the SEC Championships this weekend after taking the team title in three of their last four tournament appearances, including the Louisiana Classics on March 6, the Argent Financial Classic on March 13 and the LSU National Invitational on April 1.

Senior Sang Yi and sophomore Andrew Presley are two All-America candidates who make their return to the Seaside Course this weekend for the SEC Championships after cracking LSU’s lineup a year ago.

Yi, who is set to make his fourth career start at the SEC Championships, is LSU’s leading scorer this year with a career-best 71.9 stroke average in nine starts in 54-hole events. He has racked up a career-best four top-five finishes and seven top-10 finishes in his nine starts to solidify his All-America candidacy. Yi will tee off as the No. 35-ranked collegiate player in the country in this week’s Golfweek rankings.

Presley is on a hot streak of his own as he has finished among the Top 10 of the leaderboard in each of his last four tournament starts for the Tigers as he prepares to tee off in Friday’s first round. That includes his first collegiate victory at the Louisiana Classics, which earned him a selection as the SEC Men’s Golfer of the Week on March 8. Presley has posted a career-best 72.39 scoring average on the year.

Like Yi, Presley is considered one of the elite players in the college game as he enters the weekend with a No. 32 national ranking by Golfweek this week. Presley will take All-SEC and All-America consideration after earning two top-five finishes and four top-10 finishes during the spring season.

Senior Austin Gutgsell will join Presley in making his second career start for the Tigers at the SEC Men’s Golf Championships as he returns to LSU’s conference lineup for the first time since his sophomore season in 2010. Gutgsell caught fire at the end of the regular season while earning top-five finishes in two of his last three starts, including his second collegiate victory at the LSU National Invitational in the 2012 regular-season finale. He was named the SEC Men’s Golfer of the Week on April 8 after his win.

Two Tigers are set to make their SEC Championship debut this weekend as sophomore Franco Castro and freshman Stewart Jolly will join their teammates at the Seaside Course.