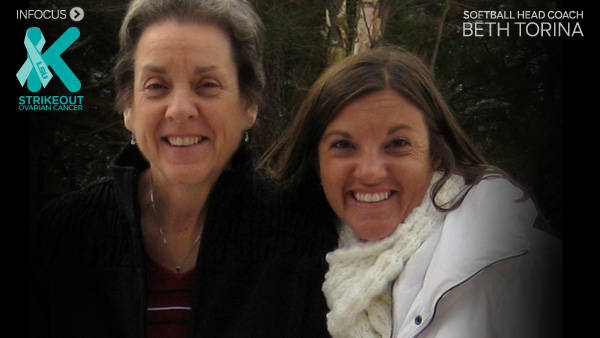 The Tigers will wear teal jerseys to celebrate survivors and spread awareness of ovarian cancer. Fans are encouraged to wear teal in support of the cause. The first 500 fans will receive a “Strikeout Ovarian Cancer” teal t-shirt, and all fans entering the ball park will be given teal pom poms.

Head coach Beth Torina‘s mother, Betty Dieter who is an ovarian cancer survivor, will throw out one of the game’s ceremonial first pitches.

Student Sports Information assistant Jacie Scott had an opportunity to sit down with Coach Torina and write an in-focus piece on her mother’s battle with ovarian cancer.

Young girls view their moms as a superhero, a “Wonder Woman” who fights off the monsters in the closet at night and serves a delicious breakfast by morning.  Most daughters may never see their mother’s super powers in action, but there is no doubt they exist.

Growing up an only child, LSU softball head coach Beth Torina and her mother, Betty Dieter, shared a similar type of relationship.  Over the years, this bond strengthened to a close support system, Dieter becoming Torina’s biggest fan.

But Torina had the chance to see what some daughters wish they could see. She witnessed first-hand her Super Mom’s amazing powers.

Dieter, a 60-year old elementary music teacher at the time, was diagnosed with Ovarian Cancer in November 2010.  Ovarian Cancer, the fifth most common cancer among women, is a cancer that begins in the ovaries and can sometimes spread to surrounding organs.  It’s often referred to as the “silent killer” because its symptoms are fairly vague, ranging from no signs, to mere nausea and bloating.

There are four stages of Ovarian Cancer that measure how far the cancer has spread.  Different stages have different predicted outcomes.  Lower stage numbers usually yield a higher recovery rate.

Because some of the symptoms of ovarian cancer can be attributed to other minor illnesses, most cases aren’t diagnosed until the cancer is in the latter stages, which were the circumstances Dieter faced.

“Most of the time when ovarian cancer is diagnosed, you’re finding it really late.  So, she was already in stage three when they found the cancer,” Torina said.

The diagnosis was hard on Torina initially because she couldn’t be with her mom as she prepared to fight one of the biggest battles of her life.  Torina coached at Florida International University in Miami at the time of the diagnosis, while her parents resided four hours away in Orlando.  She stayed in the loop through frequent phone calls and drives up-and-down the Florida Turnpike.

Perhaps the hardest thing for Torina to grasp was the fact that her mother had led a healthy life but still faced ovarian cancer.

“It was really difficult, I just couldn’t picture it. My mom is so healthy, and doctors said that about her, she’s in such good shape for her age,” Torina said. “Other than this cancer, she’s so healthy.  So, it was really shocking to me that something like this could happen, and I think she too was pretty shocked.”

Dieter’s journey began with a surgery to remove as much of the cancerous tissue as possible, followed with extensive chemotherapy on a clinical trial at MD Anderson Cancer Center in Orlando.   The treatment involved two different chemo sites: one in her chest and the other in her stomach.  Torina said that a lot of people that do this type of chemotherapy don’t complete the treatment, but her Super Mom fought through it.

“She’s so tough and strong.  She made it through all of that in flying colors,” Torina said. “She did great.  She actually was on chemo for about a year finishing up all of that.”

Today, at age 62, Dieter is back to living her daily life.  Her improvement since the treatment has been remarkable, as she’s back to teaching elementary school music and doing what she loves.  There’s no doubt there are worries any little pain could mean the cancer is back, but her strong, positive attitude she has carried throughout this journey conquers them.

Torina believes that Dieter’s doctor helped reinforce her mom’s positive attitude at a time where it could have been easy to be negative.  Her doctor never spoke to the family about anything negative at any point during treatment.  In addition, Dieter received small gifts for support from family and friends, including the elementary school students she teaches.

“I think all of this support was really important for her,” Torina said.  “I actually did the same.  When she lost her hair, I made sure she had the cutest hats possible.  Just little things to try and make it a little bit easier on her.”

This experience with Dieter has not only strengthened an already tight bond, but it’s also helped Torina to appreciate time with family, and it has made her more aware of how she treats her body.  She incorporates these lessons into her everyday life and works to bring awareness to ovarian cancer through educating the 22 young women she coaches and holding events such as Saturday’s Strikeout Ovarian Cancer game held Saturday at 6 p.m. inside Tiger Park.

“The Teal Game is where I’m trying to start.  Hopefully we can grow this into something bigger, and make this an annual event,” Torina said. “And I think, too, on the field, we aren’t just spreading awareness, but we’re going to be celebrating people who have survived this and appreciating their strength”

Torina always viewed her mom as her biggest fan, but after watching her mother fight and win such a trying battle, it’s safe to say the roles have transformed.

Torina has become the bigger fan in the relationship, a fan of her Super Mom.