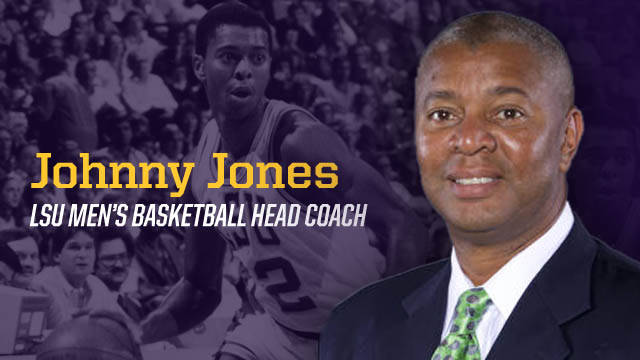 BATON ROUGE – Johnny Jones, a member of two LSU NCAA Final Four teams as a player and assistant coach, was named on Friday as the 21st men’s head basketball coach at LSU by LSU Vice Chancellor and Director of Athletics Joe Alleva.

Jones, 51, has served the last 11 seasons as the head men’s basketball coach at the University of North Texas. The DeRidder, La., native replaces Trent Johnson, who resigned after four seasons as head coach at LSU.

“I am pleased to welcome Johnny Jones back to Baton Rouge where he helped build a winner and where I am confident he will once again build a winner and bring excitement back to the Maravich Center,” Alleva said.  “I have followed Johnny closely since my first meeting with him four years ago when he was very impressive in my interview with him the last time the head coach job was open at LSU.  I have taken every opportunity to visit with him since that time and I have come to know him well.  He is the solid coach and recruiter that we need and I am particularly impressed with his passion for LSU.  It is his passion that I know will translate into success on and off the court for our student-athletes under his leadership.”

Jones played four years at LSU and was a member as a freshman of the 1981 NCAA Final Four team under Coach Dale Brown. He served 13 years on the coaching staff at LSU, and was on the staff when the Tigers became at that time the first 11-seed to advance to the NCAA Final Four in 1986.

“I am extremely excited about this opportunity and I can’t wait to get back there to Baton Rouge and LSU to get started,” said Jones Friday evening. “I look forward to the challenges ahead and to have an opportunity to come back and be a part of a special program at LSU. This is certainly a dream come true to return to a place that has so many memories for me. We will hit the ground running on recruiting with five scholarship spots available for this coming year and then in the near future I will begin to put together a championship staff for our program. I want to reconnect with the fans in Baton Rouge that pushed us and gave our basketball team so much energy through the years when I was there as a part of the program.”

North Texas averaged just five wins per seasons in the four years prior to his arrival. Under Jones, the Mean Green has averaged 21 wins per year over the last six seasons, including a school record 24 wins in 2010 and a pair of Sun Belt Conference titles and NCAA Tournament trips.

Jones has won more games than any other Sun Belt coach over the last six years and he has coached five of the nine 20-win seasons in North Texas history. Jones is responsible for the third best single-season attendance mark in school history in 2012, which marks a 121 percent attendance increase over his tenure.

In his 11 seasons in Denton, Jones has recorded a 190-146 record, making him the second winningest coach in school history. His overall career head coaching record is 205-162.

In 2010, Jones was named a finalist for the Ben Jobe Award, given annually to the nation’s top minority coach. He defeated five Final Four coaches – Lou Henson, Nolan Richardson, John Brady, Billy Tubbs and Tom Crean – in his time at North Texas as head coach.

A statement to Jones’ up-tempo mentality, North Texas boasts the Sun Belt’s highest scoring offense and highest scoring player in each of the last two seasons. The Mean Green ranked first or second in the league in scoring in each of the last seven seasons. The Mean Green also led the nation in free throws made per game in 2009 and 2011, and finished second in 2010.

North Texas has ranked among the nation’s top 70 in scoring offense eight times under Jones, including six times in the top 35.

But Jones’ teams could also play defense with four of the top five shot blockers in North Texas history playing during his tenure. The Mean Green this past season ranked among the top 50 in field goal percentage defense, rebounding margin and defensive 3-point field goal percentage.

North Texas has posted a .500 record or better in each of the last eight seasons, making that stretch the most successful stretch of basketball at the school since the 1930s.

Jones was signed by Coach Brown after a stellar prep career at DeRidder where he led his team to a combined 83-26 record and was named the MVP in Class 4A and to several prep All-America teams his senior season. He was a three-year all-district selection and twice an All-state pick after he averaged 26.3 points, nine rebounds and five assists.

As a player at LSU, besides playing on the 1981 NCAA Final Four team, Jones, nicknamed “The Bullet,” started 54 career games, he led the team in assists (124) as a junior and was ranked among the top five in the SEC that year.

Even to this date, he remains ranked 11th in career assists with 271 and is just one of 28 players in the history of the program to have dished out 200 assists or more. His 136 career steals ranked 14th all-time on a list of 21 LSU Tigers that have recorded 100 career steals.

After finishing his eligibility in 1984, he traded his LSU purple and gold uniform for a coat and tie and a seat on the LSU bench, finishing his degree work in 1985.

It was during his tenure at LSU that Jones earned his stripes as a top recruiter. Among those he helped lure to LSU were former NBA superstar and College Player of the Year Shaquille O’Neal, two-time All-American Chris Jackson (now Mahmoud Abdul-Rauf) and former national high school player of the year, Randy Livingston, the latter player part of a recruiting class that was ranked at the top of the charts by recruiting services.

After Coach Brown’s retirement following the 1996-97 season, Jones moved to another set of Tigers in Memphis, serving as Associate Head Coach in 1998 and 1999. In his first year in Memphis Jones also helped accumulate a JUCO recruiting class that was ranked No. 1 nationally and was the cornerstone of an overall class that was ranked seventh.

As an assistant at Memphis in 1998, Jones helped coach the Tigers to the Conference USA National Division championship. Jones was named the interim head coach at Memphis just prior to the 1999-2000 season and the Tigers won six of their final seven games and finished just one game below .500 with a team that had just one starter back from the previous year.

Jones would then spend one season as an assistant coach in the SEC with the Alabama Crimson Tide (2000-01) before being named the head coach at North Texas on April 16, 2001.

Jones will be formally introduced as LSU Head Coach on Monday at a media conference at a time to be announced.  The appointment must still be approved by the LSU Board of Supervisors.