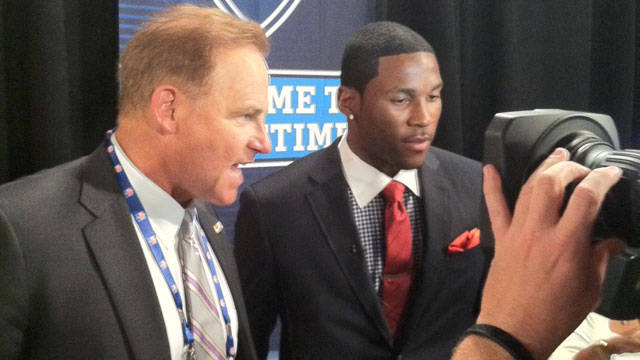 The draft runs through Saturday with the second and third rounds being held on Friday night and the final four rounds on Saturday.

Claiborne has been projected as a top five pick and is expected to be the first defensive player selected on Thursday night. Brockers and Randle are also projected first round picks and will be on hand at Radio City when their names are called.

“I’m very excited for all three of these guys because they have worked so hard to get to this point,” Miles said. “To have three players invited to New York City for the draft is special and a testament to our program and what those three men accomplished here at LSU.

“It’s a thrill to be invited to New York for the draft and I’m happy that I will be able to share this special night with them and their families.”

LSU Tigers in the Draft

As for Miles, he will take part in all three days of the NFL Network’s coverage of the draft. On Thursday, Miles will participate in a football roundtable on the NFL Network prior to the start of the first round. Miles will be joined by Stanford coach David Shaw as well as former NFL head coaches Brian Billick and Steve Mariucci as they discuss the draft and other topics related to college and pro football.

On Saturday, Miles will serve as a guest analyst for the NFL Network for the fourth and fifth rounds. Miles, who will be on set for three hours that day from 10 a.m. until 1:15 p.m., will join host Rich Eisen, Charles Davis, and Michael Irvin on the NFL Network broadcast.

“I’m looking forward to it,” Miles said of his appearance on the NFL Network. “This is a great opportunity to promote and showcase our program while also being able to provide some insight on our players and other players from around the SEC.”

LSU could have as many as eight or nine players selected during the seven-round draft. In addition to the three potential first-rounders, other Tigers expected to hear their name called include: safety Brandon Taylor, cornerback Ron Brooks, defensive end Kendrick Adams, linebacker Ryan Baker, tight end Deangelo Peterson, and offensive lineman Will Blackwell.

Since taking over at LSU in 2005, Miles and the Tigers have seen a Southeastern Conference leading 37 players picked in the NFL Draft, including eight in the first round. Last year, Patrick Peterson was taken with the fifth overall pick as LSU had six players selected in the 2011 draft.