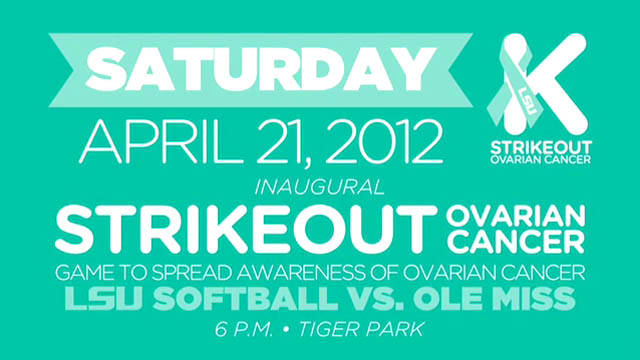 The Tigers will wear teal jerseys to celebrate survivors and spread awareness of ovarian cancer. Fans are encouraged to wear teal in support of the cause. The first 500 fans will receive a “Strikeout Ovarian Cancer” t-shirt, and all fans entering the ball park will be given teal pom poms.

Head coach Beth Torina‘s mother, Betty Dieter who is an ovarian cancer survivor, will throw-out one of the game’s ceremonial first pitches.

Survivors of ovarian cancer and other gyn cancers who would like to participate in a pregame recognition can contact Assistant Marketing Director Lauren Taylor at ltaylor@lsu.edu. Interested participants are asked to complete this online form on LSUsports.net by next Wednesday, April 18, at noon CDT.

“Spreading awareness and celebrating survivors of ovarian cancer is something that is near and dear to my heart,” Torina said. “This dreaded disease affects a lot of families, and we’re looking forward to honoring these courageous survivors.”

Ovarian cancer is the fifth leading cause of cancer death among women in the United States and occurs in 1 in 71 women. The American Cancer Society shows over 15,000 women will die this year alone and more than 20,000 new cases of ovarian cancer will be diagnosed.

Ovarian cancer is very treatable when caught early. However, pap tests do not detect ovarian cancer. Experts recommend a pelvic exam, a transvaginal sonogram and a CA 125 blood test.

Only 20 percent of ovarian cancer cases are caught early and often are difficult to diagnose because symptoms may be subtle and easily confused with other diseases. When ovarian cancer is caught before it has spread outside the ovaries, 92 percent of patients will survive five years.

LSU continues its season’s long seven-game road swing and wraps up its season series Wednesday versus Southeastern Louisiana. First pitch is set for 6 p.m. at North Oak Park in Hammond.

Live stats will be available in the Geaux Zone at LSUsports.net/live. There is no radio broadcast of Wednesday’s tilt versus the Lady Lions on the LSU Sports Radio Network.