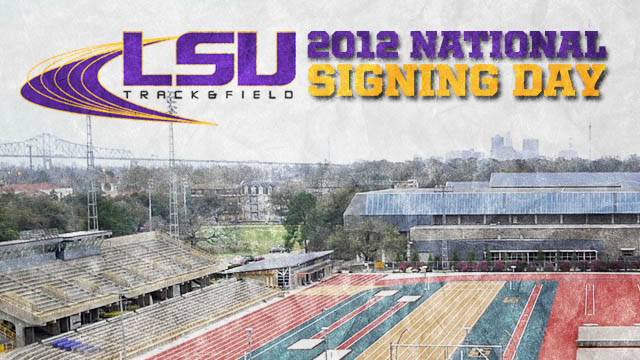 BATON ROUGE – As members of the LSU Track & Field program prepare for a Spring Break trip to Tempe, Ariz., this week, head coach Dennis Shaver welcomed the next generation of All-Americans with Monday’s announcement of the Class of 2012 as 14 recruits have signed their National Letters of Intent to join the premier program in the NCAA for the 2013 season.

LSU Track & Field attracts many of the nation’s premier athletes each recruiting season as it has a goal of winning SEC and NCAA team championships year in and year out.

This year is no exception as the 14 members of the Class of 2012 join a program in the title hunt yet again as both the Tigers and Lady Tigers are ranked No. 2 nationally for the outdoor season in the latest Top 25 power ranking released by the U.S. Track & Field and Cross Country Coaches Association.

Shaver announced the signing of seven Tigers and seven Lady Tigers that are ready to join the program in the fall of 2012 and compete in an LSU uniform for the first time during the 2013 campaign.

Shaver believes this year’s early recruiting haul has helped address specific needs for each event area, and is sure to provide the talent and depth necessary to compete for championships for years to come.

“We’re excited to announce an outstanding class of 14 recruits that we expect will make an impact for our program right away in the 2013 season,” Shaver said. “There is a tremendous amount of talent in our class in each of the event areas, which is what we need to achieve our goal of winning team championships that has made this program what it is today as one of the best in collegiate track and field.

“We see great potential already in this class. But as is the case each season, this is only the beginning with our recruiting efforts for the Class of 2012. We’ll continue to work hard to finish off this class throughout the spring and summer as we roll along toward the fall semester.”

The men have strengthened their vaunted sprints group thanks to the football program as both Holmes and Raymond signed National Letters of Intent with the Tigers on Feb. 1 as part of National Signing Day.

Holmes emerged as one of the nation’s elite 400-meter sprinters during his junior season at Breaux Bridge High School as he captured the gold medal at the 2011 AAU Junior Olympics National Championships in New Orleans while setting his lifetime personal record of 46.07 seconds in the event final. It was a time to earn Holmes the No. 2 national ranking at the prep level for the 2011 outdoor season.

He proved to be the catalyst in Breaux Bridge High School taking the Class 4A team title at the Louisiana High School Athletics Association Outdoor State Track & Field Championships a season ago when he ran 46.31 in the 400-meter final en route to being crowned state champion in the event.

While establishing himself as one of the top young 400-meter prospects in the United States, Holmes took the title as the Louisiana Gatorade Boy’s Track & Field Athlete of the Year for the 2011 season.

Raymond added a pair of Class 4A state titles of his own with a sweep of 100-meter and 200-meter events while running personal-best wind-aided times of 10.52 in the 100 meters and 21.51 in the 200 meters with his performance as a junior at East Jefferson High School in 2011. He followed by claiming the Division I indoor state crown in the 55-meter dash as a senior in 2012. His PR of 6.40 from this season ranked as the No. 11 prep performance nationally for the 2012 indoor campaign.

The Tigers have certainly signed one of the nation’s premier groups of quartermilers as Bush and Grayson will join Holmes in solidifying LSU’s 4×400-meter relay team over the next four seasons.

A product of Woodbury High School, Bush set his PR of 46.95 in winning the 400-meter silver medal last season at the New Jersey State Interscholastic Athletic Association Meet of Champions, where he also ran his wind-legal personal best of 21.56 in the state final of the 200-meter dash. Bush finished his junior year as the nation’s No. 6-ranked prep quartermiler among members of the Class of 2012.

Grayson, who hails from Rummel High School, is an emerging star on the track as a high school senior as he opened the 2012 outdoor season by setting a lifetime PR of 47.16 in winning the 400 meters at his own meet at the Archbishop Rummel Track Classic held at Tad Gormley Stadium in New Orleans. He also ran 47.56 to set the Sugar Bowl Track Classic meet record just a few weeks ago.

By signing both Hulbert and Lamers to National Letters of Intent, the Tigers have added a pair of budding hurdlers who will make an impact in both the sprint hurdles and intermediate hurdles next season.

Lamers has enjoyed a breakout senior season at Calvary Baptist Academy as one of the nation’s elite prep prospects in the sprint hurdles while setting personal records of 7.30 in the 55-meter hurdles and 14.03 for the 110-meter hurdles to rank among the best in the country for the Class of 2012.

Lamers broke Barrett Nugent‘s LHSAA Division I Indoor State Championships meet record in claiming a state title in the 55 hurdles when he clocked the country’s No. 7-ranked time indoors for 2012 at 7.30 with his performance. He followed outdoors by winning the Division I crown in the boy’s 110-meter hurdles at the Texas Relays with a career-best wind-aided time of 13.98 in the final after running a wind-legal PR of 14.03 in the preliminary round for the No. 8-ranked performance nationally this spring.

A product of Crete-Monee High School, Hulbert is perhaps LSU’s most versatile prospect signed with the Class of 2012 as he is likely to run the 60 hurdles, 110 hurdles and 400 hurdles with the Tigers.

The Tigers have also signed arguably the top all-around throws prospect in the state of Louisiana for 2012 as Hughes will join the program following his prep career at Dutchtown High School.

The 2012 LHSAA Division I indoor state champion in the shot put, Hughes has recorded personal records of 54 feet, ½ inches in the shot put, 160-5 in the discus and 182-8 in the javelin with his prep career as the most versatile throws prospect in Louisiana for the 2012 recruiting season.

“We’ve got a lot of versatility with the young men joining our program next season,” Shaver said. “I think we addressed some very specific needs in terms of what we will lose in the longer sprints and hurdles after this season. We look for this class to come in and make an immediate impact on our team, while also having the opportunity to mature and develop as future leaders in our program.

“The role our football program played in signing the likes of Kavahra Holmes and Derrick Raymond is an exciting development with regards to this class. We look forward to them joining our team once their time with football has come to an end each season. They have an opportunity to carry on LSU’s tradition of the impact two-sport athlete with the best football and track combination in all of college sports.”

The Lady Tigers have added experience with their recruiting Class of 2012 that is led by a trio of standout prospects of National Junior College Athletics Association power South Plains College.

Joining the Lady Tigers in 2013 are reigning NJCAA champions Keri Emanuel, Natoya Goule and Shana-Gaye Tracey as each will compete as a junior after arriving at LSU in the fall.

Goule is arguably the top recruit to join the NCAA Division I ranks for the 2013 season as she is certainly one of the world’s top young prospects in the 400-meter dash and 800-meter run as the defending NJCAA Outdoor champion in each event. She established impressive lifetime personal records of 51.52 in the 400 meters and 2:01.45 in the 800 meters during her freshman season at SPC a year ago.

Emanuel is one of the premier jumps prospects to sign a National Letter of Intent with the 2012 recruiting season while earning four NJCAA All-America honors during her brief career at South Plains. Emanuel is the reigning NJCAA Outdoor champion in the long jump as she competes this spring.

While she has recorded a wind-legal personal record of 20-1 ¾ in the long jump with her career, Emanuel has earned a reputation as one of the nation’s leading triple jumpers at the collegiate level in the wake of her third-place finish in the women’s university final at the 2012 Texas Relays just 10 days ago. She went over 43 feet on four jumps in her series, including a wind-legal PR of 43-10 for her fourth jump. Emanuel also posted marks of 43-7 ¼w, 43-7 ¾ and 43-10w in her series at the Texas Relays.

Tracey joins her SPC teammates as a future Lady Tiger, as she is the reigning NJCAA Outdoor champion in the 400-meter hurdles following her championship victory as a freshman a season ago.

Tracey, who is a former high school teammate of Goule’s at Manchester High School in Jamaica, clocked 58.96 to strike gold in the 400 hurdles at the 2011 NJCAA Outdoor Championships. She boasts strong PR of 57.74 that was run in a fourth-place finish in the event at the 2007 IAAF World Youth Championships. Tracey also owns a lifetime PR of 53.33 in the 400-meter dash.

Nikita Tracey, who is no relation to Shana-Gaye Tracey, will join the Lady Tigers following her two-year stint at Oklahoma Baptist University of the National Association of Intercollegiate Athletics.

Nikita Tracey was crowned the NAIA champion in the 400-meter hurdles after clocking a seasonal best of 58.11 in the final at the 2011 NAIA Outdoor Championships. She broke 58 seconds in the event during an impressive youth career as one of Jamaica’s top young performers in the intermediate hurdles, including a personal best of 56.89 in winning the bronze medal at the 2010 NACAC Under-23 Championships.

A product of Edwin Allen High School, Nikita Tracey has won 10 international medals for Jamaica in her career, which includes gold-medal winning performances for the Carifta Games and Pan American Junior Championships in 2009. She is also a veteran of the IAAF World Junior Championships.

The Lady Tigers have also signed a trio of prep standouts to National Letters of Intent this season with the addition of Carlsen, Davis and Schuetz to the roster for the 2013 season.

Carlsen is currently the nation’s No. 3-ranked performer in the javelin after opening the 2012 campaign in victory at the Northeast Bradford vs. Wyalusing Dual Meet with a personal-record throw of 147-5. She has also thrown 145-3 in the javelin during her senior season outdoors this spring.

Davis, who hails from Spring Hill High School in Longview, Texas, is an emerging star in the 200 meters as one of the premier sprinters in the state for the Class of 2012. She captured the Texas Class 3A silver medal in the 200-meter dash after running a wind-legal PR of 24.03 at the 2011 University Interscholastic League Class 3A Outdoor State Championships during her junior season in 2011.

Schuetz inked with the program as the top distance prospect in the state of Louisiana for the Class of 2012 as a seven-time state champion during her prep career at Parkview Baptist High School.

“We will add a tremendous amount of experience to our women’s team when this class arrives on campus in the fall,” Shaver said. “This is a very talented group. We feel like this is a group of athletes that has that potential to come in and help us continue the tradition that we’ve established at LSU. That’s our goal year in and year out, and this class will certainly give us that opportunity again next season.

“While our women have added a lot of experience, we’re also excited about the potential in those younger athletes we’ve signed as part of this year’s class. This is a group of young women that will flourish during their time in our program, and we look forward to seeing them develop over the next four years.”