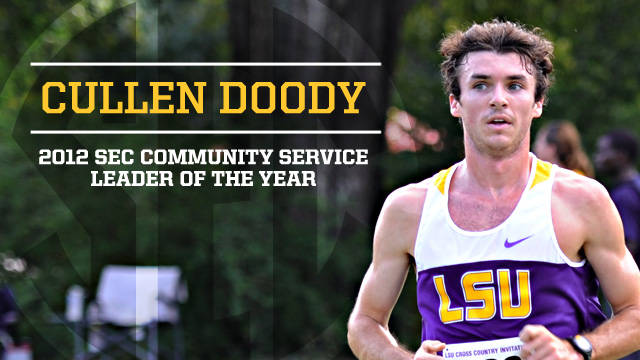 While Doody was honored as this year’s men’s recipient, Alabama cross country runner and track athlete Leigh Gilmore received the women’s award as part of Thursday’s announcement by the SEC office.

They were chosen this year’s Brad Davis SEC Community Service Leaders of the Year by a committee of Faculty Athletics Representatives from the league’s 12 member institutions. Doody and Gilmore will each receive a $10,000 postgraduate scholarship provided by the SEC.

Doody is the third LSU student-athlete to be picked as Brad Davis SEC Community Service Leader of the Year as he joins former baseball players Tim Lanier in 1997 and Jordan Faircloth in 2005.

A native of Arabi, La., Doody will earn a B.S. degree in Biological Sciences in May. Doody is a two-time recipient of the Wally Pontiff, Jr. Academic Excellence Award at LSU, as well as a Chancellor’s Award winner from 2009-11. He is also a three-time member of the SEC Academic Honor Roll during his career while maintaining a 3.93 cumulative grade-point average in Biological Sciences.

As a three-year member of LSU’s Student-Athlete Advisory Committee, Doody has played a primary role in the SEC’s “Together We Can” food drive, as well as Habitat for Humanity projects in Baton Rouge. He is also a familiar face to the children at Our Lady of the Lake Hospital and Delmont Elementary School.

Doody also helped LSU host children and families at “Thanksgiving with the Tigers” and is a volunteer in the “Geaux Givers” program as a campus leader in community service.

The son of Tim and Ellen Doody, he was twice named LSU’s Cross Country Runner of the Year during a standout career in 2009 and 2011, while also serving as team captain during his senior season in 2011. He has been accepted to medical school and plans to pursue a career in dermatology.

In addition, 11 other male and 11 other female nominees for this year’s Brad Davis SEC Community Service Leader of the Year award will receive a $5,000 postgraduate scholarship provided by the SEC, as LSU Softball senior Ashley Applegate is among this year’s list of nominees for the women’s award.