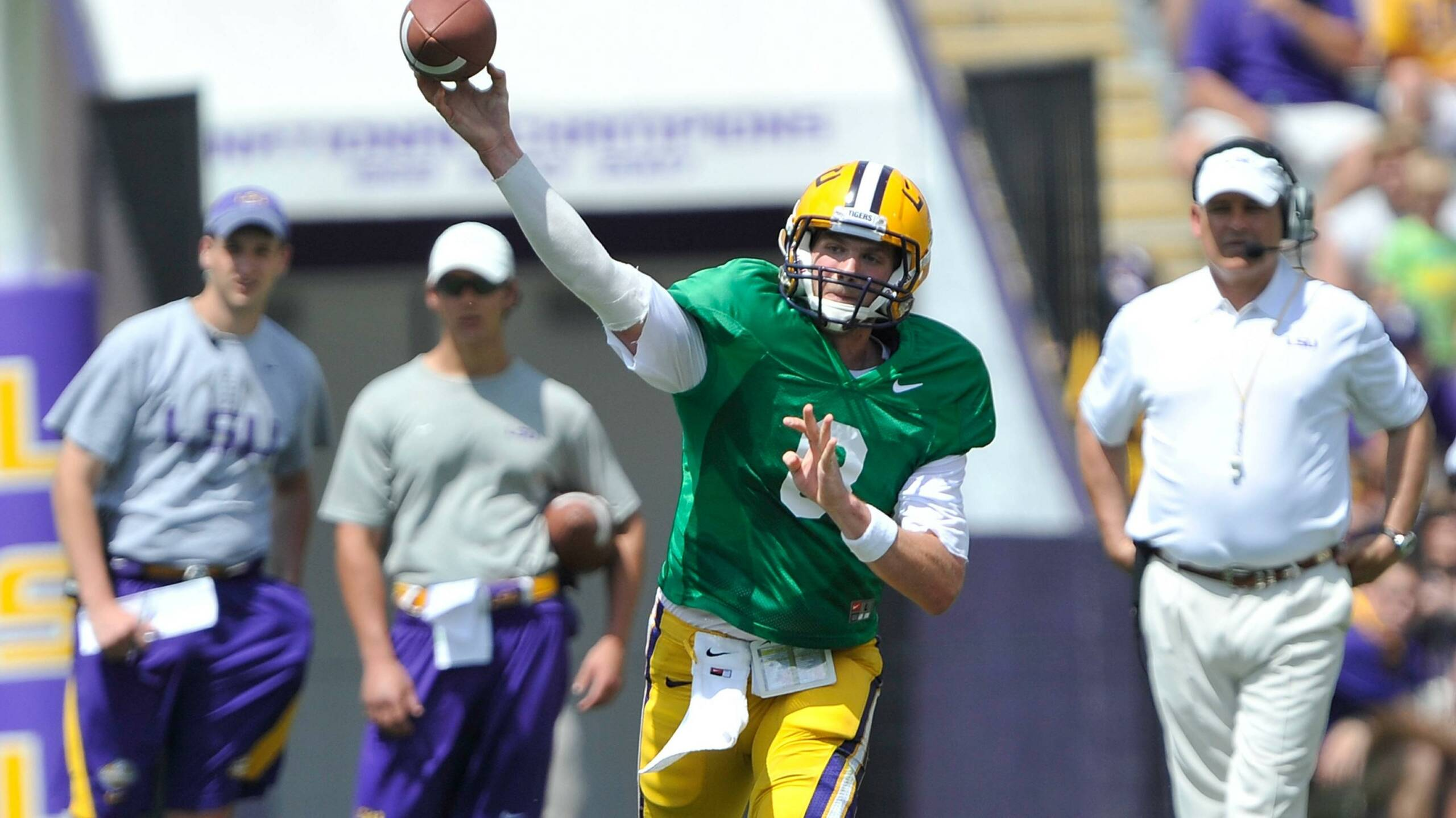 Mettenberger led all passers going 14-of-25 for 270 yards. He threw a 49-yard touchdown to sophomore wide receiver Odell

Beckham Jr. on the first play of the second quarter to open the scoring for White. On the next drive, the sophomore quarterback concluded a 7-play, 84-yard drive with an 18-yard touchdown pass to senior wideout Russell Shepard.

White’s Jarvis Landry led all receivers with 120 yards on six catches, including a 54-yard long from Mettenberger in the first quarter.

Beckham Jr. caught three balls for 115 yards, highlighted by a 53-yarder and the 49-yard TD bomb, which both came in the first-half.

Purple starting quarterback Steven Rivers threw for 75 yards and finished 6-for-17 with an interception.

Placekicker Drew Alleman was 2-for-3 on field goals playing for both teams, with connections from 47 and 44 yards. He added five extra points.

Sam Montgomery, Josh Downs, Luke Muncie and Justin Maclin each had a sack for White, and Lavar Edwards had Purple’s only quarterback takedown.

Before the game, SEC Commissioner Mike Slive and multiple Tiger greats including NFL All-pro Patrick Peterson were on hand to help commemorate the 2011 season.

“I am really happy that the commissioner found his way down to Baton Rouge to help us celebrate the championship,” LSU head coach Les Miles said. “I thought the crowd was spectacular. We really encouraged them to be here at 12:30 and they were here at noon. Again, another example of how LSU fans love their Tigers.”

Tyrann Mathieu and Morris Claiborne were presented with the Bednarik Trophy and the Thorpe Award, respectively. All-Americans Will Blackwell, Sam Montgomery and Brad Wing were also honored, and Miles was presented with the AP Coach of the Year Trophy as part of the pre-game festivities.

The first quarter saw Brad Wing punt for both sides a total of three times. The bulk of White’s 83 total yards came on a Mettenberger 54-yard deep ball to Landry along the right sideline to set them up at the Purple 7-yard line.

Sophomore defensive back Ronald Martin picked off Mettenberger in the end zone three plays later, and he brought it back 40 yards to the Purple 40, but Purple could not muster much as Rivers was sacked twice on the ensuing drive.

Mettenberger then began the White onslaught as he connected on touchdown passes to Beckham Jr. and Shepard on back-to-back possessions in the second-quarter, before Eric Reid intercepted a Rivers pass at the White 45. The junior safety returned it 55 yards for a touchdown that gave White a 21-0 lead, and White went into halftime with a 24-3 advantage.

Junior running back Tabari Williams capped a 17-play, 75-yard Purple drive with a 1-yard touchdown scamper with 1:07 remaining in the third quarter to reduce the Purple deficit to 24-10 heading into the fourth.

Purple linebacker Lamar Louis then intercepted Mettenberger and returned it to the end zone with 4:45 remaining in the game to conclude the scoring.

Opening Statement…
“First of all, I am really happy that the commissioner commionser found his way down to Baton Rouge to help us celebrate the championship. I though the crowd was spectacular. We really encouraged them to be here at 12:30 and they were here at 12:00. Again another example of how LSU loves their Tigers.

“I like the spring. I’d say the overall view of the spring is a good one. I think we have  proved that we can throw the football and we can run the football. Defensively, our front seven is going to be very difficult to deal with. We have some depth at linebacker with some young guys in the spring. I felt like the secondary is going to be there. We didn’t have (Craig) Loston in the game today. All said and done, I thought it was a good spring. I look forward, as we go forward here, I think that (Zach) Mettenberger has really improved and continues to. I think he made a mistake today down in there in position to score. He really tried to force the ball that he really didn’t need to throw, but other than that is was really a pretty good day for him.”

On if he feels if the offense was indicative of what they will see in the fall…
“Yeah, I think improvement needs to take place in the passing game and that is something that we did today. I think balance has always been what we want to get done. We are going to be a talented running team and it is going to go to the guy who is the best first. (Alfred) Blue played well today, (Spencer) Ware has times and I thought Kenny (Hilliard) was hot against the first defense. The thing that was good today was that there was not a turnover with our running backs. We carried the ball well. With that being said, there will be competition at that position.”

On Mettenberger and his ability to stretch the field…
“We will challenge anyone to play a single high coverage against us. If they play a double high, then frankly we will have the opportunity to run the football so pick your poison.”

On the excitement for the upcoming season…
“I think that the development of the offense is taking place. I think everyone understands their role. There are still some work to do, it is not like we have accomplished everything at this point. Our defense has to be consistent with their plays and stop offenses. It’s really all three phases. It’s fundamental. It is not a defense or an offense, it is got to be all three. If our offense goes out there and moves the football and gets big chunks like we do then we put a lot of pressure on our opponents because now we can also move in a short game with the running game or hit the long ball with our throwing game. It really puts a lot of pressure on our opponents and we just have to continue to do so.

On the relationship with the receivers …
“We’re good.  We all hang out, even with the offensive line. We hang out a lot together. We’re a bunch of good friends and I don’t think we need to improve there. We just need to keep doing what we’re doing.”

On his performance in the Spring Game …
“I thought I had a lot of good passes, and I missed a couple. That’s something that I’m going to look into later today when we look at the film. I think we did well in the passing game today.  I’d just like to hit a little more.”

On the passing game …
“I didn’t know that we were going to throw the ball as much as we did.  Zach came out here and he was throwing the ball well, and it just worked for us. You have to love that as a receiver, that’s what you play for. You love coming out and catching deep balls, and today was a good day.”

On Zach Mettenberger …
“With Zach’s arm strength, he knows what he can do and he knows that he can make those deep ball throws.  He takes the chances, and he’s doing pretty well. We have a certain type of chemistry and connection, and I think today it just showed.”

On cornerbacks Jalen Collins and David Jenkins …
“They both have things to work on, and they are working every single day. Jalen Collins is going to be a phenomenal player.  He’s got a great body type, a 6-3 lanky corner. It’s hard to just get past him. They’re going to keep working and fighting for that No. 3 spot.”

On the receiving corps …
“It’s a competitive thing in the receivers meeting room. We just want to come out and perform any way that we can and give everybody a show.”

On improving the offense …
“We just need to work on communication, not getting depth on routes, dropped balls, things that we can control. Going back into practice in the fall, this will definitely be key.”

On personal and team performance …
“It felt good to get back out here. I made a lot of plays today, and I made a lot of stops. I felt like I did everything I needed to do. We haven’t lost a beat. We’re still dominating. The front looks good; we just need to step it up some. We’ll work on that during the summer.”

On the BCS Championship …
“January 9th was put to bed a long time ago. It’s been in our minds, but just as a reminder that for every game you have to be ready for every last moment.”

On young teammates …
“We wanted to play hard this game for the younger guys so they can get their feet wet coming into the summer and into the fall. I think we have a lot of young guys that are ready to see some SEC football and championship football. They’ve been working on it all spring long, and they’re going to work over the summer to prepare for the season.”

On Zach Mettenberger as starting quarterback …
“I think we’re going to win a championship with him. That’s just my opinion, but he’s throwing the ball and he has his receivers in a stream of confidence right now. I think those guys are definitely going to do something special this year.”