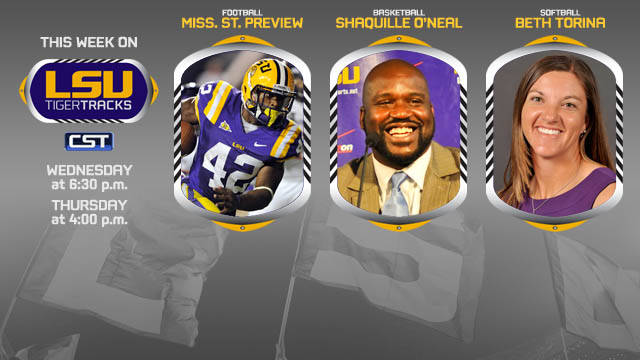 BATON ROUGE — This week’s edition of LSU Tiger Tracks, a program highlighting various aspects of the university and its athletic department, can be seen at 6:30 p.m. Wednesday and 4 p.m. Thursday on Cox Sports Television.

LSU Tiger Tracks begins this week with a preview by correspondent Garrett Walvoord of the Tigers’ SEC football opener at Mississippi State.

New LSU softball coach Beth Torina drops by the studio to talk about the impact she plans to make upon the Tiger program as the squad begins fall practice later this month.

The show concludes as correspondent Kent Lowe conducts an interview with LSU basketball legend Shaquille O’Neal. A bronze statue of O’Neal was unveiled last week outside of the Pete Maravich Assembly Center.