'Geaux Free' to Soccer and Volleyball in 2011 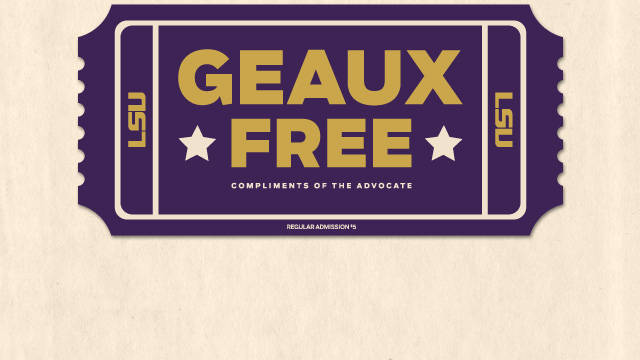 BATON ROUGE — Tiger fans will now have the opportunity to “Geaux Free!” to see the Southeastern Conference championship contending LSU soccer and volleyball teams in action during the 2011 season as admission is free for each home match this fall, compliments of The Advocate.

There is no doubt that fans will enjoy the very best collegiate competition each sport has to offer as all are invited to cheer the Tigers to victory in what is sure to be a high-energy and family-friendly experience at both the LSU Soccer Complex and Pete Maravich Assembly Center this fall.

LSU Volleyball will play host to 14 matches at the PMAC this season and will kick off the campaign later this month with the Tiger Classic being held Aug. 26-27. The Tigers will play a double header on Aug. 26 with matches against Alcorn State at noon CDT and Louisiana-Lafayette at 7 p.m. They will then wrap up the Tiger Classic on Aug. 27 against Jacksonville State at 11 a.m. and Miami (Fla.) at 7 p.m.

LSU Soccer is scheduled to host nine matches at the new-look LSU Soccer Complex this fall as the squad opens its brand new stadium next month with two matches against the Oregon Ducks on Friday, Sept. 9 at 7 p.m. and the Pepperdine Waves on Sunday, Sept. 11, at 1 p.m.

Each team is poised to join the SEC championship chase again in 2011. LSU Volleyball captured the SEC crown in 2009 and has captured six-straight SEC Western Division titles while making six-straight NCAA Tournament appearances. LSU Soccer finished runner-up for the SEC title in both 2008 and 2009, and has won the SEC West and received an NCAA berth in three of the last four seasons.

“As we embark on a new era of LSU Volleyball, we are extremely excited for everyone to be able to come out to the Maravich Center and watch us for free,” said LSU Volleyball Head Coach Fran Flory. “Our matches are very family friendly and now are certainly very affordable. We are excited about the Geaux Free program and look forward to seeing more loyal Tiger fans in the stands.”

Fans are sure to enjoy home soccer matches like never before as the LSU Soccer Complex received a total facelift during the offseason with the building of additional seating, new lighting, a brand new concession stand and new restrooms to give the Tigers one of the finest facilities in the SEC.

By adding a second level of bleacher seating to the existing structure, the official capacity of the new-look LSU Soccer Complex will increases to 2,197, which will easily accommodate a fanbase that has helped to create one of the more intimidating home-field advantages in the SEC.

In addition, new entry gates have been built on the west side of the LSU Soccer Complex, featuring brand new brick columns throughout. New gating has also been installed across the top of the bleachers.

Fans attending future matches at the LSU Soccer Complex will benefit from the addition of the permanent concession stand located directly below the press box. The facility will also feature two new restrooms for a total of four as men’s and women’s facilities will be located at both ends of the stadium.

“This is a new season in so many ways for LSU Soccer,” said head coach Brian Lee. “We’re all excited of the opportunity to open up our brand new stadium and invite our wonderful fans to come out and enjoy an experience like they never have before. They have an opportunity themselves to see some of the very best teams in the country right here this fall for absolutely free. That’s a deal you just can’t beat.”