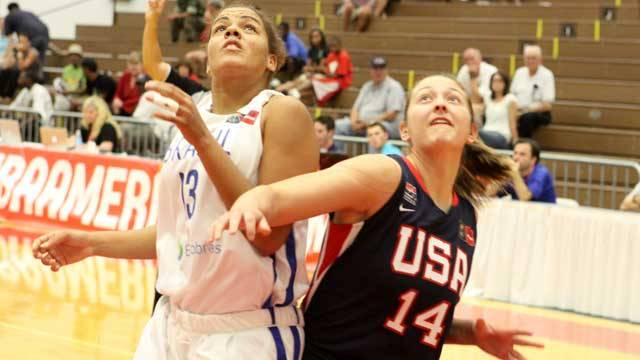 The U.S. finished 5-0 in the tournament and won its fourth straight gold medal against the top 18-and-under international competition in the FIBA Americas zone, including Central, North and South America. The Americans outscored their opponents, 467-188, for an average margin of victory of 55.8 points in the five tournament games.

Plaisance, who will be a freshman at LSU during the 2010-11 season, averaged 7.8 points and ranked second among all players in the tournament with a total of nine blocks in five games. She added five boards in 14 minutes during the gold medal contest.

“It feels amazing,” Plaisance said. “Nothing can compare to this feeling. This just tops them all. Winning your first gold medal, much less any gold medal, is a great feeling, and it’s just awesome to come out here and represent your country and win for your country.”

The Houma native also ranked sixth in the tournament in field goal percentage (.516) and second in assist/turnover ratio (3.0). Plaisance’s putback at the buzzer in the first quarter gave the Americans a dominant 22-7 advantage.

Plaisance contributed 11 points and six rebounds in a 98-28 semifinal win over Chile to propel the U.S. into the gold medal game. The 2010 McDonald’s All-American said she learned a lot during her first USA Basketball experience.

“Probably getting to know all these people,” she said. “I have great coaches and great teammates, and I couldn’t have picked a better team. These kids are great, and I loved every moment I had with these people.”

As one of the top four finishing teams in this year’s FIBA Americas U18 Championship for Women, the USA earned a berth in the 2011 FIBA U19 World Championships next summer in Chile.

Plaisance was a two-time Louisiana Gatorade Player of the Year at Vandebilt Catholic High School. She lifted the Lady Terriers to the Class 4A state championship this past season and brings impressive credentials to an LSU program that signed one of the top 16 signing classes in America according to ESPN.com.