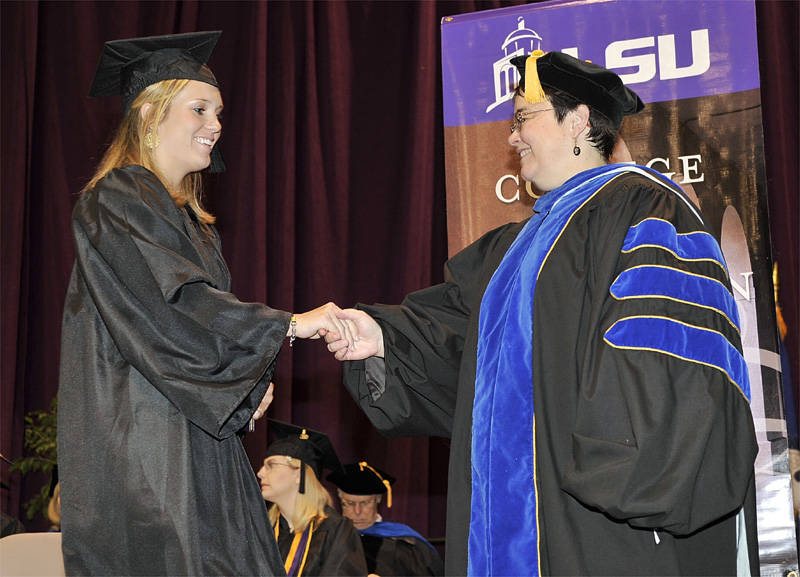 Henry graduates as one of the elite sprinters to ever wear the purple and gold as she has racked up 12 All-America honors during her career. Thomas has also established herself as one of the premier middle distance runners to compete for the Lady Tigers as she has added 10 All-America honors to go along with eight SEC titles and 13 All-SEC awards during her prolific career. The duo was instrumental in the Lady Tigers winning their last national championship at the 2008 NCAA Division I Outdoor Track & Field Championships in Des Moines, Iowa.

Football added nine graduates, highlighted by starters Chris Hawkins, Danny McCray, Chris Mitchell and Keiland Williams. Williams was a four-year contributor for the Tigers, rushing for 1,699 yards and 17 touchdowns in his career, and Hawkins and McCray were both staples of the LSU defensive backfield during their careers.

The swimming and diving teams graduated seven athletes. Nate Telep and Lauren Grandy were both four-time members of the SEC Academic Honor Roll. Grandy finished her LSU career with the third-fastest times in school history in the 200 and 500 free and was a member of the record-breaking 800 free relay.

Four baseball players earned their degrees, including pitcher Paul Bertuccini and former pitcher Jared Bradford. Bertuccini is LSU’s top middle reliever this season with a team-low 1.80 ERA and 24 strikeouts in 26 appearances for the Tigers. He is also a three-time member of the SEC Academic Honor Roll.

Soccer also graduated four. Katherine Lagow started all 24 matches during her senior season in 2009 and was a leader of the defense. Rachel Yepez was one of the most prolific scorers in program history during her tenure, amassing 33 goals and 19 assists. Yepez was also a member of the SEC Academic Honor Roll and the SEC Community Service Team in each of her last two seasons.

Three LSU women’s tennis players earned their degrees. Mathis and Hannah Robinson were both ITA Scholar-Athletes every year, and Mykala Hedberg was one of LSU’s most prolific doubles players with 87 victories in her career.

Women’s basketball star Allison Hightower is one of the all-time elite players in school history with 1,509 points and 89 blocked shots during her career. She earned All-America honors as a junior and senior and was a National Player of the Year candidate in 2010. Hightower was also a finalist for the Lowe’s Senior CLASS Award, which recognizes excellence on and off the floor.

Men’s basketball player Tasmin Mitchell was a four-year contributor for the Tigers, starting every game except one during his career. Mitchell started on two SEC Championship teams (2006, 2009) and was instrumental in helping the Tigers reach the NCAA Final Four in 2006. Mitchell finished his career third in scoring with 1,989 points, sixth in rebounds with 950 and eighth in steals with 190.