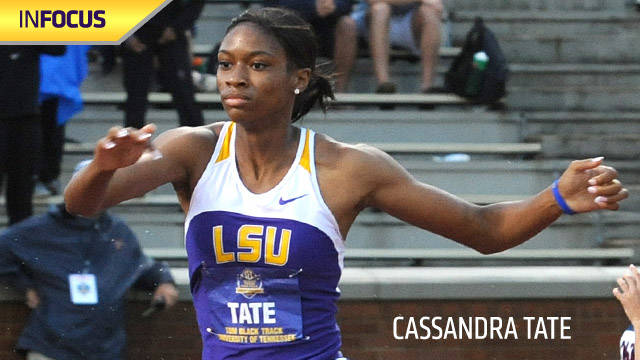 Cassandra Tate is no stranger to success.

Having won eight individual state championships during her prep career at Loranger High School in Hammond, La., it only made sense that Tate would take the next step and join an LSU program steeped in championship tradition. And in less than two years, she has quickly developed into one of the NCAA’s premier performers in the 400-meter hurdles.

And no one can deny that her victory on Sunday at the 2010 SEC Outdoor Track & Field Championships in an event she has only run four times in her life is anything less than extraordinary.

Tate signed with LSU in 2009 as a sprint specialist, having claimed state titles in the 100 meters, 200 meters and 100-meter hurdles as a high school star at Loranger. But it wasn’t long before LSU head coach Dennis Shaver discovered another way to utilize her untapped potential.

“When we brought her in last year as a freshman, I really wanted to run her in the sprint hurdles and see if she had the kind of speed to compete at this level,” Shaver said. “Unfortunately, we almost had a catastrophe at the indoor meet at Texas A&M.”

While running the 60 hurdles at the SEC/Big 12 Challenge, Tate struck a hurdle and fell, an accident that Shaver said she was lucky to escape without serious injury. She did not hurdle again for the remainder of her freshman season, instead focusing on the 200-meter dash as her individual event.

But fate intervened in the form of depth issues on the Lady Tigers’ 4×400-meter relay team.

“We didn’t have any depth in that event,” Shaver said. “We were running our 4×400-meter relay with our 800-meter runners, and the way our schedule was set up last year at the NCAA Championships, that was going to be a real challenge for them.”

Shaver turned to Tate, who never ran the 400 meters in high school and was reluctant to embrace her new opportunity at the time.

“We needed someone to do it and I took one for the team and told them I’d try it,” Tate said. “It ended up being something I was good at.”

While opening up on the first leg of the relay, Tate and her Lady Tiger teammates went on to capture first place at the SEC Outdoor Championships and NCAA Mideast Regional Championships in 2009.

That helped pave the way for an event switch that would lead to unprecedented success outdoors during her sophomore season in 2010.

“Having worked with her for a couple months prior to that, I just didn’t think she had the kind of natural speed that you have to have to be a big-time NCAA sprint hurdler, yet she’s still a good hurdler,” Shaver said. “So I thought, somebody who’s built like her, if we can just get her 200-meter speed better freshman year and if she could start running some good splits on our 4×400, ultimately the 400 hurdles is the event that could be her specialty. So, that’s the direction we decided to take.”

“We had talked about it last year and he told me to think about it,” Tate said. “I told him I would try it and this was the year to try it out. We wanted to open up in a low-key meet so I could get the feel of it.”

“I was very patient,” Shaver said. “We started training specifically for the 400 hurdles when we finished the NCAA indoor season. I told her I wasn’t going to be in a hurry to run her in a race and our target date was in Miami over spring break. That’s where we wanted to open up for the first time.”

Her first race over the 400 hurdles at the Miami Elite Invitational on April 10 would help serve as a trial by fire for someone who hadn’t even gone the full distance in practice.

“I had practiced it, but I had never done the full race,” Tate said. “The most I had ever gone over at once was eight hurdles. I really didn’t know what to expect.”

She crossed the finish line in second place.

While finishing runner-up was a positive result in her opening race, Tate’s time of 1 minute, 0.12 seconds left Shaver convinced that she could run much faster.

“I was a little disappointed in Miami about the performance that she turned in, but I also realized that was her first time, Shaver said. “The time wasn’t so hot, but it was OK to start. We came back home to the LSU Alumni Gold meet and she really stepped it up a notch.”

At the LSU Alumni Gold on April 17, Tate shaved more than two seconds off her time while crossing the finish line in 58.08 seconds. After wrapping up the regular season, Tate arrived at Tennessee’s Tom Black Track at LaPorte Stadium for the SEC Championships with just two races under her belt.

And the best was yet to come.

Aided by a strong performance in the prelims and a blunt pre-race speech, Tate was ready to take her spot atop of the medal podium as the No. 1 intermediate hurdler in the Southeastern Conference. She advanced to the final with the third-fastest time of the prelim round at 58.47.

Shaver only had one simple mandate before Tate stepped onto the track for the final. He told her to win.

“When I asked her how she was going to run the final and she started to tell me, I said, ‘Just stop – you need to win this race. You need to do whatever it takes to win this race because these are the same people that you’re going to have to run against when we go to the first and second rounds of the NCAA Championships,” Shaver said. “You need to make sure you win this race and gain a lot of confidence and we’ll go from there.’ That’s all I told her to do.”

In only her fourth race ever in the 400-meter hurdles, Tate ran the fifth-fastest time in LSU history and raced to victory in a dominating fashion, crossing the finish line in 57.12 seconds, which is more than half a second over the runner-up exactly three seconds faster than her initial effort only weeks before.

Tate credited her SEC championship victory to the mental approach she took going into the final.

“It’s a mind thing,” Tate said. “When I first ran it, I was just running it. I never gave myself a chance to actually compete and sprint. At this meet, I knew I had a chance to win, so I gave it all I had.”

“It was exciting after I won, but winning the whole team championship was an even better feeling since I was able to share it with all my teammates,” Tate said.

Her win has ramifications that stretch far beyond the singular focus of her instant success. Tate scored 10 points for the team at the SEC Outdoor Championships, an incredible feat considering the Lady Tigers did not have a single competitor in the event for the entire 2009 season, much less someone who was able to score crucial points in the postseason.

“I honestly believe that if she does go that far and if she does make the NCAA final, I think she’ll help our team a bundle,” Shaver said. “Those are some points that nobody thought we were going to get at this NCAA meet. She now has us in a position to be able to do that.”

What could the future possibly hold for someone improving at such a rapid pace?

“I can be 10 times better,” Tate said when asked how much she has left to improve.

Shaver took it a step further.

“Right now, we’re still in the infancy of her learning the event,” he said, “But I can see her being somebody who, by the time she’s a senior, can be one of the best ever at the NCAA level in that event.”