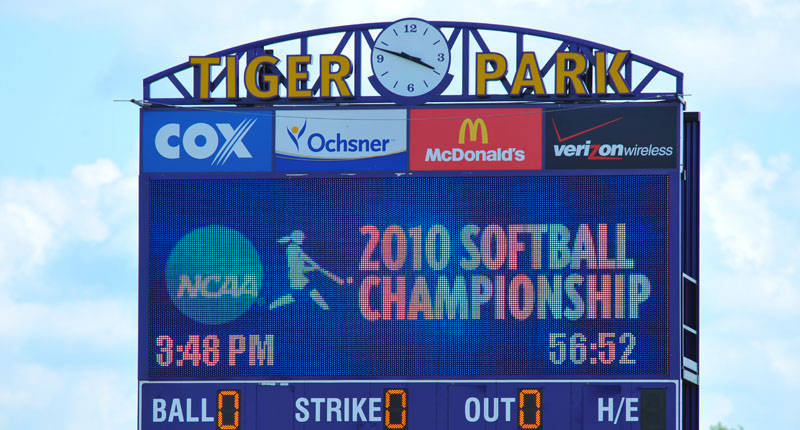 BATON ROUGE – The No. 12 national seed LSU softball team welcomes Texas A&M, Louisiana-Lafayette and McNeese State for the NCAA Baton Rouge Regional at Tiger Park this weekend. It marks the sixth regional that the Tigers have hosted, but the first at Tiger Park’s current location on Skip Bertman Drive.

LSU (44-14, 20-8 SEC) is making its 12th NCAA Regional appearance since the program was reinstated in 1997. The Tigers are 35-22 in NCAA Championship play sparked by a pair of Women’s College World Series appearances during the 2001 and 2004 seasons.

LSU opens the double elimination regional Friday against McNeese State. First pitch against the Cowgirls is slated for 6 p.m.

“We’re extremely excited to have postseason play back at Tiger Park and are looking forward to a great weekend of softball,” head coach Yvette Girouard said. “All four schools in this regional have wonderful fan support so it should be an electric atmosphere. Our players have worked very hard to get to this point. We want them to have fun because not everyone has the chance to play in the tournament.”

Kirsten Shortridge, an NFCA All-South Region and All-SEC First-Team performer, is the catalyst for the Tigers. She has recorded hits in 15 of her last 18 games and ripped a pair of home runs highlighted by a two-run walkoff blast against Kentucky en route to SEC All-Tournament Team accolades.

Ashley Applegate has moved her average up to .308 after hitting safely in 15 of her last 19 outings. She has coaxed a team-best 30 walks and LSU is 27-0 this season when Applegate crosses the plate.

Mitchell’s 59 hits are second on the team with 36 of her base knocks coming against RPI Top 50 foes. She paces LSU with 14 multi-RBI efforts and the Tigers are 12-2 when Mitchell reaches this feat.

Young’s 39 RBIs are just outside the SEC’s Top 10, while Langoni has reeled off 15 RBIs during her last 20 contests. Langoni has bumped her average up to .290 after coming away with a .227 clip last season.

Juliana Santos has picked up hits in 10 of her last 17 games coupled with Courtney Hollier who has added RBIS in five of her nine outings.

Jessica Mouse has reached base in 47 of 56 games she has earned an at-bat. Her defense at third base has been extremely impressive with 112 assists which rank third in the SEC.

Cody Trahan, Rachele Fico and Brittany Mack continue to anchor a pitching staff that has already tossed 15 shutouts. The trio has not only the SEC’s lowest ERA but the nation’s fifth-lowest clip at a 1.46 ratio in addition to holding the opposition to under three in 42 of 58 games.

Trahan, a NFCA All-South Second-Team selection, sports a 13-4 mark to go along with a 1.47 ERA and has yielded only 32 runs during 128.2 innings of work.  Seven of her 13 victories have come against RPI Top 50 schools and she has garnered win in five of her last seven decisions, including a win over No. 5 Florida in the SEC semifinals.

Fico has turned in a 19-6 record with a SEC-leading 1.21 ERA and secured a program single-season mark of five saves. She has had a stellar freshman campaign and racked up NFCA All-South Region First-Team, All-SEC Second Team and SEC Co-Freshman of the Year.

In her last outings, Fico held the high-octane Alabama offense to two runs over six frames of relief and has totaled four or more Ks in 18 of her 20 appearances over 3.0 innings.

Mack is 9-3 with a 1.59 ERA and has won eight of her last nine decisions. In her three setbacks, Mack received a total of one run of support.

All of LSU’s postseason games will be broadcasted live on ESPN 104.5 and The X 104.9 FM in the Baton Rouge area with Patrick Wright set to call the action. Every game from the NCAA Baton Rouge Regional will have free live video and live stats in the Geaux Zone on LSUsports.net along with in-game updates via http://twitter.com/lsu_softball.

All-Session tickets are on-sale now and can be purchased online at www.LSUtix.net as well as in person at the LSU Athletics Ticket Office or by phone at 225-578-2184 or 800-960-TKTS. Chair back seating in sections 103, 104 and 105 have already been sold out for the weekend. There are a limited number of bleacher back seats in section 107 along with general admission still available.

The LSU ticket office is open Monday-Friday from 8 a.m. until 5 p.m. on the first floor of the Athletics/Administration Building. The Tiger Park Ticket Trailer will open at 1:30 p.m. and stadium gates will follow 30 minutes later.