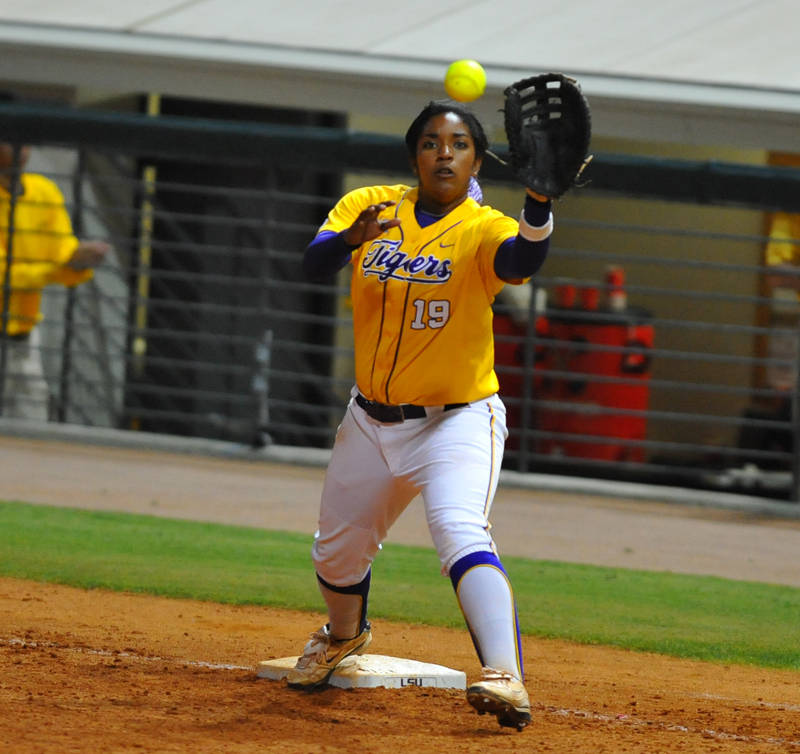 “LSU softball had a phenomenal season and I’m proud our players received some much-deserved recognition for their outstanding play,” head coach Yvette Girouard said. “Anissa, Cody, Kirsten, Rachel and Rachele have been instrumental to LSU’s success this season and will continue to be key factors for the Tigers as we head into the postseason.”

Fico strung together 10 consecutive wins from LSU’s home opener to the Florida series [Feb. 17-April 3] en route to a 19-6 record with a SEC-best 1.21 ERA. Her strong freshman season also included a program single-season record of five saves to go along with nine wins against the RPI Top 50. She joined former All-American Britni Sneed as the only players in program history to record back-to-back SEC Pitcher of the Week awards. The Oxford, Connecticut native has totaled four or more Ks in 18 of her 20 appearances over 3.0 innings of work.

Shortridge, a two-time SEC Player of the Week and USA Softball National Player of the Week recipient, has slapped hits in 47 of 58 games and put together a .413 hitting clip on 85 hits. After going homerless for the entire regular season, Shortridge ripped a pair of long balls at the SEC Tournament. Her 44 steals are second in the SEC and second for a single-season at LSU only behind Dee Douglas. The Keller, Texas product has stolen a base against every SEC team and her defensive range has allowed her to record 58 putouts from centerfield.

Young has cranked eight home runs to go along with 39 RBIs on a .253 batting areage. Her 39 RBIs are just outside the SEC’s Top 10 and 19 of her 40 hits have gone for extra bases. LSU is 19-2 this season when Young records a RBI. She is tied for the second on the team with nine multi-RBI performances. The Fontana, California native also has coaxed 23 walks and been hit-by-a-pitch 20 times for a program single-season record.

Mitchell has connected for a scorching .345 hitting clip and picked up seven homers to go along with a team-best 43 RBIs. She has finished strong with 30 of those RBIs coming during her last 34 outings and her average has raised 52 points since March 20. 37 of Mitchell’s 60 hits have come against RPI Top 50 schools, while the seven homers have allowed Mitchell to become LSU’s all-time home runs leader. The LaPorte, Texas product checks in with 16 multi-hit and 14 multi-RBI performances and her 19 stolen bases rank 10th in the SEC.

Trahan sports a 13-4 record to go along with a 1.47 ERA, second-lowest in the SEC. She has racked up 120 strikeouts against only 25 walks and surrendered only 32 runs in 128.2 innings of action. She has tossed 17 quality starts, at least 5.0 IP and three earned runs or less] and secured seven wins over RPI Top 50 teams. During three of her four losses, Trahan received only four runs of support against the high-octane offenses of Florida [2-1], Alabama [3-1] and Georgia [3-2].

LSU is making its 12th NCAA Regional appearance since the program was reinstated in 1997 and hosts the NCAA Baton Rouge Regional at Tiger Park this weekend. The Tigers open the double elimination regional Friday against McNeese State with first pitch on-tap for 6 p.m.

All of LSU’s postseason games will be broadcasted live on ESPN 104.5 and The X 104.9 FM in the Baton Rouge area with Patrick Wright set to call the action. Every game from the NCAA Baton Rouge Regional will have free live video and live stats in the Geaux Zone on LSUsports.net along with in-game updates via http://twitter.com/lsu_softball.

Below are the complete NFCA All-South Region squads.