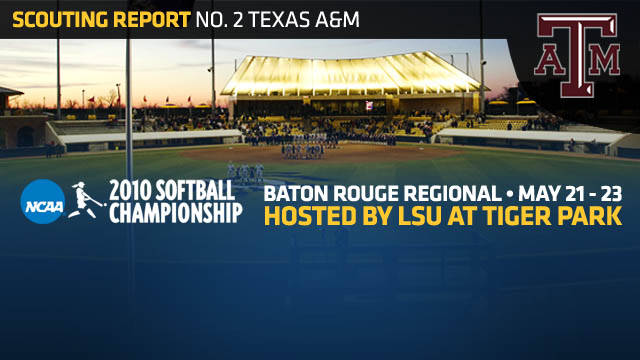 BATON ROUGE – Leading into to Friday’s NCAA Baton Rouge Regional at Tiger Park, LSUsports.net will profile each of the visiting schools. Take a look at the field, and get all-session tickets for the softball regional in Baton Rouge.

All-Session tickets are on-sale now and can be purchased online at www.LSUtix.net as well as in person at the LSU Athletics Ticket Office or by phone at 225-578-2184 or 800-960-TKTS. Chair back seating in sections 103, 104 and 105 have already been sold out for the weekend. There are a limited number of bleacher back seats in section 107 along with general admission still available.

The LSU ticket office is open Monday-Friday from 8 a.m. until 5 p.m. on the first floor of the Athletics/Administration Building.

On the season, the Aggies have a record of 42-14 (12-6 Big 12). They played 14 games this season against teams who were ranked at the time, going 6-8. Remarkably, eight of these games were against a total of four teams who were each No. 11 at the time the Aggies played them.

The Aggies are led by record-setting freshman catcher Meagan May, who recorded a team-high .411 batting average. She set the new single-season home run record at Texas A&M by smashing 22 home runs and also established new marks for total bases with 144. She leads the Big 12 in those categories as well as on-base percentage, walks and slugging percentage.

In the circle, the Aggies have been boosted by another freshman in Melissa Dumezich. Dumezich has racked up a 17-2 record, while holding opponents to just a .218 batting average. She also had the team-best ERA with a scant 2.10 mark. The Aggies also feature sophomore Rebecca Arbino, who tallied a record of 19-9. She logged a team-best in innings pitched and posted the staff’s most strikeouts, complete games, and lowest batting average against.

Texas A&M placed a total of five players on the All-Big 12 Conference squads in 2010. May and first baseman Rhiannon Kliesing each earned spots on the first team while Dumezich, Lauren Schwirtlich and Alex Reynolds were named to the second team. Kliesing’s first team selection was unanimous.

While Texas A&M didn’t face any of their three regional opponents in the regular season, there will be some familiar faces if they go up against McNeese in the regional. McNeese boasts 10 players from Texas and Lindsey Langner played high school softball with two members of the Aggies, Kliesing and Kelsea Orsak.

Season Profile
Pitched in 33 of the team’s 56 games this season… Compiled a 19-9 record in the regular season… Led the team in strikeouts, sitting down 142 in 186.0 innings… Displayed control in only walking 37, a ratio of nearly four strikeouts per walk… Threw 15 complete games.

Season Profile
Pitched in 32 games this season, starting in 17… Allowed a team-low 2.10 ERA while putting together an impressive record of 17-2 in her freshman campaign… Struck out 110 batters and walked 49… Opponents hit only .214 against her this season… Big 12 Pitcher of the Week for 3/30 and 5/11… Named to Big 12 All-Tournament Team… Second Team All-Big 12 Conference selection.

Season Profile
Played in all 56 games this season… As a freshman, set the Texas A&M single-season records for home runs (22) and total bases (144)… Leads the Big 12 in Slugging percentage (.974), on base percentage (.570), and walks as well as the aforementioned home runs and total bases… Had a team-high 60 RBISs and 43 runs were second-most for the Aggies… Big 12 Player of the Week for 2/16 and 3/23… Named to Big 12 All-Tournament Team… First Team All-Big 12 Conference selection.

Season Profile
Played in 55 of 56 games this season… Made only one error and recorded a team-best fielding percentage of .997… Hit .373 and scored 33 runs… Launched 11 home runs and batted in 51 runs… Also notched 10 doubles for the season… Unanimous First Team All-Big 12 Conference selection.

Season Profile
Played in 50 games this year… Compiled a .258 average while plating eight runs and scoring 19 of her own… also stole eight bases in 10 attempts, both of which were team highs… Second Team All-Big 12 Conference selection.

Season Profile
Played in all 56 games this season… Recorded a .280 batting average while scoring 43 runs and belting 16 RBISs… Also had one home run and one triple… Stole six bases in nine attempts… Committed 14 errors, most on the team.

Season Profile
Played and started in all 56 games… Batted a solid .280 for the season… Tied for second on the team in both stolen bases and attempts, swiping six bases in nine tries… Scored 46 runs and batted in 38 runs… Also swatted six home runs… Was the only Aggie to hit more than one triple, belting five of the team’s seven total.

Season Profile
Played in every game this season… Scored 26 runs and belted 21 RBISs… Tied for second in stolen bases with six… The only starting outfielder to have a fielding percentage above .900 by a wide margin, as hers was .960.

Season Profile
Played in 51 games this year… Hit .191 while scoring 12 runs and knocking in 10 runs… Struck out less than any other regular starter… Also hit five doubles, one home run, and stole two bases in two tries.

Season Profile
Played in 46 games this season, starting in 37… Notched 16 runs and 18 RBISs while hitting .202… Displayed flashes of power, connecting for five home runs as well.