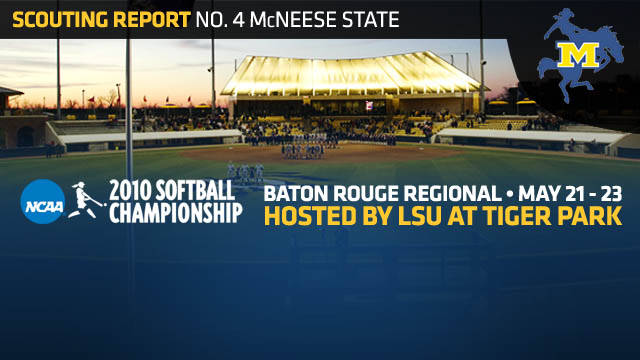 BATON ROUGE – Leading into to Friday’s NCAA Baton Rouge Regional at Tiger Park, LSUsports.net will profile each of the visiting schools. Take a look at the field, and get all-session tickets for the softball regional in Baton Rouge.

All-Session tickets go on-sale to the general public Wednesday at 8 a.m. Tickets can be purchased online at www.LSUtix.net as well as in person at the LSU Athletics Ticket Office or by phone at 225-578-2184 or 800-960-TKTS. The ticket office is open Monday-Friday from 8 a.m. until 5 p.m. on the first floor of the Athletics/Administration Building.

On the season, the Cowgirls have a record of 38-25 (17-13 Southland). They claimed the Southland Conference’s automatic bid by defeating Texas State, 3-2, in the conference tournament championship game.

McNeese has not faced Texas A&M this season but compiled 2-3 mark versus LSU and Louisiana-Lafayette. The Cowgirls dropped a 7-2 decision to the Tigers in Lake Charles but rebounded to take a 3-0 victory in Baton Rouge. The Southland Conference champions also managed to take one of three from the Cajuns during the regular season.

The Cowgirls are led by junior Molly Guidry, who recorded a team-high .354 batting average. She also displayed the ability to hit for power as well as average, blasting eight home runs and piling up 32 RBISs.

On the mound, McNeese relies on freshman Meagan Bond. Bond has pitched more than half of the team’s innings this season and notched an impressive 22-10 record with a 2.58 ERA. She averages more than one strikeout per frame and held opponents to a slim .210 batting average. The Cowgirls also will count on junior Kayla Shepherd to give them quality innings. Shepherd is 10-8 on the season with a 2.51 ERA. She has given up only six home runs in more than 100 innings pitched.

McNeese State placed a total of nine players on the All-Southland Conference squads in 2010. Guidry, Morvant and Bond each earned spots on the second team, while Marissa Koetting and Lindsey Langner were named to the third team. Four other players received honorable mention status.

While Texas A&M is the only team they haven’t faced in the regular season, there will be some familiar faces if they compete in the regional. The Cowgirls boast 10 players from the Lone Star state and Lindsey Langner played high school softball with two members of the Aggies, Kelsea Orsak and Rhiannon Kliesing.

McNeese State is coached by Natalie Poole, who has a record of 69-54 in two seasons. She has played some part in two out of the school’s three NCAA appearances, coaching this year’s team and playing on the 1994 team that earned the school’s first-ever postseason appearance. At her previous school, she led Georgia Southern to its only NCAA Tournament bid in 2006.

Season Profile
Pitched in 40 of the team’s 63 games this season … Compiled a 22-10 record, including a complete game shutout of LSU in Baton Rouge … Led the conference in strikeouts, sitting down 252 batters in 225.1 innings … Displayed control in only walking 61, a ratio of more than four strikeouts per walk … Second Team All-Southland Conference selection.

Season Profile
Played in 48 games this season … A defensive standout behind the plate, recording 272 putouts while earning a .990 fielding percentage … At the plate, hit .244 while knocking in 18 RBIS and scoring 12 runs … Honorable Mention All-Southland Conference Selection.

Season Profile
Played in 59 of 63 games this season … Made only four errors and recorded a fielding percentage of .988 … Hit .277 and scored 12 runs … Launched three home runs and batted in 26 runs … Also notched nine doubles for the season … Honorable Mention All-Southland Conference Selection.

Season Profile
Played in 55 games this year … Compiled a .257 average while plating 34 runs and scoring 27 of her own … Also belted seven home runs, second-most on the team … Tied for the team lead in triples with four … Third Team All-Southland Conference Selection.

Season Profile
Played in all 63 games this year … Scored 24 runs and also batted in 24 runs … Hit 10 doubles as well as two home runs … Served as a capable defender at the “hot corner” with a .929 fielding percentage … Honorable Mention All-Southland Conference selection.

Season Profile
Played and started in all 63 games … One of three Cowgirls to break the .300 mark, hitting .332 … Finished second on the team in stolen bases with 29 … Scored 36 runs and batted in 16 runs … Collected four triples, tied for most on the team … Honorable Mention All-Southland Conference selection.

Season Profile
Played in all but one game this season … Scored a team-high 41 runs and belted a team-high 36 RBISs … Finished second on the team in batting average (.340) and hits (66) and third in home runs (6) … Lead the team in stolen bases with a remarkable 33 steals in only 35 attempts … Struck out only 16 times, the least amount among regular starters … Second Team All-Southland Conference selection.

Season Profile
Played in 59 games this year … Was the only routine starter to put up a perfect 1.000 fielding percentage this season … Also demonstrated talent at the plate, hitting .297 and scoring 31 runs … knocked in 19 RBISs and stole nine bases in 11 attempts … Third Team All-Southland Conference selection.