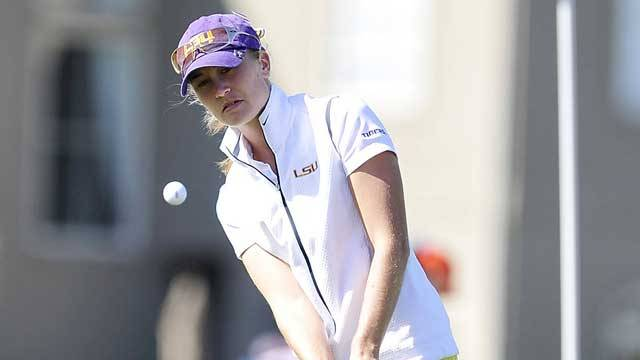 Although the umbrella was out on a wet Monday for the second practice round, the junior from Stuart, Fla., McChrystal was able to get in the short game work she felt she needed prior to the championship and is ready to go in the individual competition? of the 72-hole event which runs through Friday.

“Megan has hit the ball very good in the practice rounds and I think she will play well,” said LSU Coach Karen Bahnsen. “She has had another good year for our program and would love to see her finish the year on a high note.”

McChrystal earned a spot in the championships as one of two individuals from the West Regional that did not qualify as part of the top eight teams that qualified from each of the three regionals. McChrystal finished in sixth place at the event after rounds of 71-71-76, posting a five-over 218 over the Stanford Golf Course.

LSU’s team struggled over the final holes of the regional and dropped out of the eighth and final qualifying spot by one shot, missing out on the team’s third consecutive visit to the championships.

McChrystal, who earned first-team All-SEC honors for the second consecutive year, is making her third consecutive appearance at the Championships and is just the fifth LSU golfer to appear in three Division I Championships in their LSU career.

McChrystal has a win this year in the Tiger-Wave Golf Classic at English Turn and averaged a team-best 73.2 strokes per round. She is sixth in stroke average in the SEC and ranked 23rd in the country in the GolfWeek/Sagarin Performance Rankings.

“I feel pretty good,” said McChrystal. “I feel having played the Preview (in the fall) is a big advantage. The course is a little different, but I think I’m more comfortable going back as opposed to seeing it and finding out for the first time. It feels a little different this time since I’m not going with my team, but I just have to go out and treat it like just another tournament.?

“I sat down before SECs and wrote down some goals that (Coach Bahnsen) wanted us to accomplish,” she said. “I wrote down I wanted to finish top 10 in SECs, regionals and nationals. We’ve got two of those so far so let’s see if we can get the third one.”

Live scoring for the national championship is on LSUsports.net through Golfstat.com. The individual competitors tee off Tuesday at 7:55 a.m. CDT.