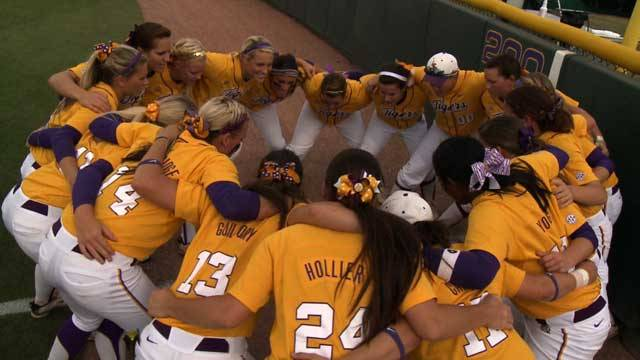 FAYETTEVILLE, Ark. – The No. 17 LSU softball team faces off with Kentucky Thursday in the quarterfinals of the SEC Tournament at Bogle Park on the University of Arkansas campus. First pitch is scheduled for 11 a.m. and will be televised by ESPNU with Cara Capuano and Michele Smith anchoring the coverage.

Rachel Mitchell, an All-SEC Second-Team performer, headlined LSU with a pair of first inning home runs during the first two games of the series against the Wildcats. Anissa Young and Juliana Santos tacked on long balls of their own during the series finale, while All-SEC First-Team selection Kirsten Shortridge added a pair of multi-hit games.

In the circle, the SEC Co-Freshmen of the Year Rachele Fico picked up a pair of wins highlighted by a complete game four-hitter where she was touched up for one run in game three. Brittany Mack also fired five shutout frames before yielding three runs in the sixth inning before giving way to Fico for the save during the middle game of the series.

“I’m excited for our players to have the opportunity to focus only on softball after having to cram their final exams into a two-day period,” head coach Yvette Girouard. “I thought we played some of our best softball earlier this season at Kentucky, and we’ll have to match that intensity to be successful here.”

All of LSU’s tournament games will be broadcasted live on ESPN 104.5 and The X 104.9 FM in the Baton Rouge area with Patrick Wright and Matt Dunaway set to call all of the action. Live stats are available in the Geaux Zone on LSUsports.net along with in-game updates via http://twitter.com/lsu_softball.