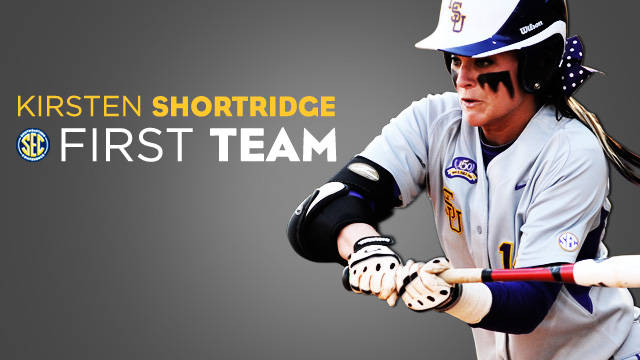 BIRMINGHAM, Ala. – Rachele Fico, Rachel Mitchell, Jessica Mouse and Kirsten Shortridge represented the No. 17 LSU softball team on the All-SEC squads Wednesday as announced by the league office.

Fico and Mitchell picked up All-SEC Second-Team accolades. Fico added to her historic season and became the first player in program history to notch a share of the Co-Freshmen of the Year award. She also came away with an All-SEC Freshman Team selection.

The quartet each garnered All-SEC Defensive Team status as the league’s best fielding unit headlined the conference with four selections.

“We’re extremely proud of all of our All-SEC winners,” head coach Yvette Girouard said. “Kirsten and Rachel have anchored our outfield and been key components of why our team has been successful this season. They’ve had wonderful careers for the Tigers and I’ll miss not being able to write their names down on the lineup card when the season is over.”

“It’s rare for a pitcher to get SEC Freshman of the Year, but Rachele has had that type of season,” Girouard continued. “I’ve said it all year, but I’ve been impressed with how she has approached this season. She continues to get better each day and is a special talent. I can’t be more pleased for Jessica. Her work ethic is second-to-none and she makes the toughest plays look routine. Her glove has saved a lot of runs for our pitchers and been a vital asset to our infield.”

Shortridge, a two-time SEC Player of the Week [March 16 & May 3] and USA Softball National Player of the Week [March 17] recipient, has been the catalyst from the top of the lineup. She ranks among the league’s Top 10 in batting average [.412], hits [80], runs scored [46], stolen bases [44] and multi-hit efforts [27]. The Keller, Texas native has reeled off stolen bases against every SEC team, while her defensive range has allowed her to record 53 putouts from her centerfield post.

Mitchell has connected for a scorching .352 hitting clip and picked up seven homers to go along with a team-best 43 RBIs. She has finished strong with 30 of those RBIs coming during her last 32 games and her average has climbed 59 points since March 20. In the process, Mitchell has become LSU’s all-time home run leader with 35 of her 58 hits coming against RPI Top 50 opponents. The LaPorte, Texas native also has posted 16 multi-hit performances, 13 multi-RBI games and added 19 stolen bases.

Fico has turned in an 18-5 record with a SEC-leading 1.16 ERA. Her 136 strikeouts along with her .189 opponent batting average also check in fourth-best in the conference. Fico has tallied nine wins over RPI Top 50 opponents and secured five saves for a program single-season mark. The Oxford, Connecticut native recorded two SEC Pitcher of the Week in consecutive weeks and joined Sneed as the only other player in program history to accomplish feat. She has fired four or more strikeouts in 18 of her 20 appearances over 3.0 innings.

Mouse, the SEC Player of the Week for April 26, has played superb defense and her 104 assists are third in the SEC, first among third basemen, to go along with 69 putouts against two errors for a .989 fielding clip. She also has compiled a .276 hitting clip and drove home 23 RBIs from the No. 9 spot in the lineup.

LSU meets Kentucky Thursday in the SEC Tournament Quarterfinals. First pitch is slated for 11 a.m. at Bogle Park on the University of Arkansas campus. The game will be televised by ESPN U with Cara Capuano and Michele Smith anchoring the coverage. Fans also can listen to the game live on The X 104.5/104.9 FM in the Baton Rouge area with Patrick Wright and Matt Dunaway set to call all the action.