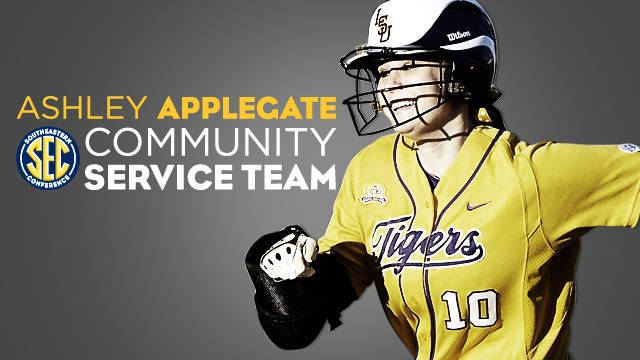 Applegate has been a vital part of softball’s community service efforts after serving as the team’s representative on LSU’s Student-Athlete Advisory Committee [SAAC]. She also has excelled in the classroom and earned back-to-back SEC Academic Honor Roll accolades.

Applegate organized softball’s involvement in the SEC Together We CAN Food Drive where the team collected canned goods and donations at two volleyball matches last fall to benefit the Greater Baton Rouge Food Bank.

Applegate also spearheaded the squad’s efforts at the Halloween BOOzar event where she set up a softball activity booth and provided local kids with a safe night of fun. The Modesto, Calif. native led games, handed out candy and signed autographs.

Applegate and her teammates raised money to provide gifts and clothes to an underprivileged child from a homeless shelter. The team had the opportunity to present the child with these gifts at the annual Christmas with the Tigers event.

Applegate also has been involved in Big Buddy Day of a Mentor where she allowed an elementary school student the opportunity to shadow her on campus for a day, and she tutored students in math at Magnolia Woods Elementary School as part of the Volunteers in Public Schools (VIPS) Program during the fall semester.

LSU meets Kentucky Thursday in the SEC Tournament Quarterfinals. First pitch is slated for 11 a.m. at Bogle Park on the University of Arkansas campus.

The game will be televised by ESPN U with Cara Capuano and Michele Smith anchoring the coverage. Fans also can listen to the game live on The X 104.5/104.9 FM in the Baton Rouge area with Patrick Wright and Matt Dunaway set to call all the action.