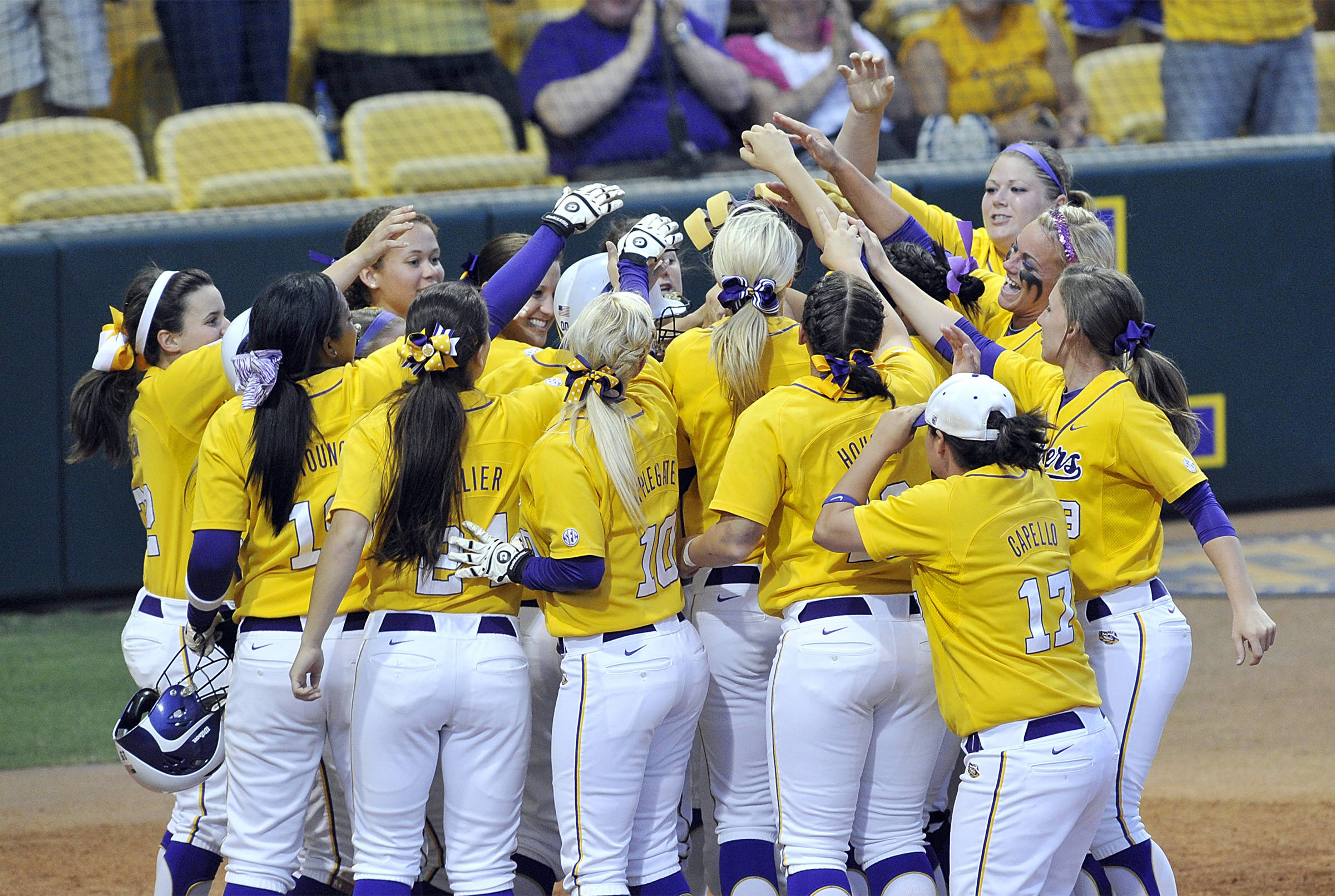 BATON ROUGE – The No. 16 LSU softball team wraps up the regular season on the national stage with a weekend series at No. 18 Tennessee. Saturday’s doubleheader gets underway at 11 a.m. followed by a Sunday single-game slated for a 1 p.m. start. Games one and three of the series will be televised on ESPN and ESPN U with Cara Capuano and Michele Smith anchoring the coverage.

“It’s awesome for Tiger softball to have back-to-back weekends on the national stage,” head coach Yvette Girouard said. “We’ve had a little trouble with Tennessee in the recent past, and we will have to play our best softball to break that dry spell. If we play well, it’s a situation where we can look at the mirror at the end of day and feel well about our performance.”

LSU (41-11, 19-6 SEC) continues to headline the SEC with a paltry 1.32 staff ERA in addition to posting the league’s best fielding percentage with a .976 clip. Both marks are third and eighth nationally.

Cody Trahan, Rachele Fico and Brittany Mack spark a staff that has already tossed 14 shutouts and held opponents to under three runs on 39 occasions. The Tigers are 34-5 in those contests.

Trahan has won four of her last five decisions en route to a 12-3 mark and has recorded a 1.12 ERA. She has surrendered only 19 runs during 106.0 innings of work and compiled 104 strikeouts against 15 walks. Her 0.99 walks per seven inning ratio is fourth-lowest in program history for a single season.

Fico has turned in a 17-4 record with a SEC-best 1.09 ERA and secured a program single-season mark with five saves. She is an impressive 6-0 and been touched up for only two earned runs in her last 40.0 frames dating back to April 7. The Connecticut native fired 4.2 innings of two-hit relief during the middle game of the Georgia series her last time out.

Mack is 9-3 with a 1.59 ERA and has won eight of her last nine decisions. She is 4-0 in conference play and notched league wins over South Carolina, Auburn, Mississippi State and Kentucky.

Kirsten Shortridge, reigning SEC Player of the Week, fuels the LSU offense with a team-best 77 hits on a .421 batting average. She joined Dee Douglas as the only players in program history to pick up 40 stolen bases in a season and her 26 multi-hit efforts are tied for second in the SEC. Her heart-stopping steal of home plate handed LSU a 4-3 edge against Georgia during game two.

Rachel Mitchell has boosted her average by 64 points since March 20 highlighted by a quartet of multi-hit performances during her last six outings. She checks with a .357 hitting clip, cranked seven home runs and added a team-high 43 RBIs. In the process, Mitchell has eclipsed three-time All-American Leslie Klein for the program’s home run record with a two-run long ball to open the Georgia series.

Anissa Young and Ashley Langoni are right behind Mitchell with 36 and 32 RBIs, respectively. The Tigers are 19-1 when Young records a RBI this season, while Langoni is hitting .308 and has connected for 15 RBIs during her last 14 games.

Courtney Hollier put a 0-for-12 stretch behind her at the plate and ripped a RBI-single to open the Georgia series. She also deposited a solo homer down the left field line to ignite LSU’s 5-3 comeback victory in the second game.

Juliana Santos has compiled a .333 batting average and smacked hits in eight of her last 11 games after going 9-for-61 to start the season. She drew a bases loaded walk to cap LSU’s four-run sixth inning in game two of the Georgia series.

“Juliana is capable of having a strong finish,” Girouard said. “We certainly need that bat in our lineup. She’s starting to get healthy and is on the verge of giving us some solid offensive production.”

Tennessee (39-11, 15-7 SEC) is led by Raven Chavanne, Kelly Grieve and Kat Dotson, its top three hitters. The trio has racked up 197 hits and is 78-for-91 in the stolen base department. Jessica Spigner has knocked eight homers to go along with 49 RBIs, while Tiffany Huff has added six long balls and 41 RBIs.

“Tennessee’s offense is a different challenge for our team,” Girouard said. “They don’t have the gaudy home run numbers like Florida, Alabama and Georgia. They can still hit the long ball and do a great job of creating havoc with their short game. We have to get the ball quickly and can’t make mistakes on the infield. Hopefully, we’ll pitch well and keep their key hitters off the base paths.”

All three games of the Tennessee series will be broadcasted on ESPN 104.5 and The X 104.9 FM in the Baton Rouge area with Patrick Wright and Matt Dunaway set to call all of the action from Lee Stadium.

Live stats also are available in the Geaux Zone on LSUsports.net along with in-game updates via http://twitter.com/lsu_softball.