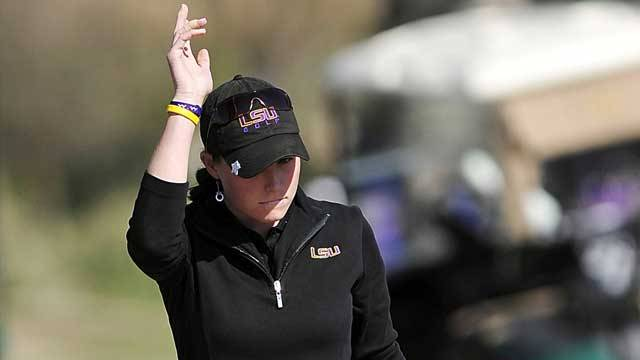 PALO ALTO, Calif. – The quest to advance to the NCAA Division I Women’s Golf Championship for the third straight year and the fourth time in the last five years begins Thursday for the LSU women’s golf team as they begin play in the2010 NCAA West Regional Tournament.

This is the stage where only the top eight of 24 teams in each of three different NCAA regionals advance to the championships, May 18-21, in Wilmington, N.C. The other regionals are taking place in Greenville, N.C. (East) and Columbus, Ind. (Central).

LSU will be in the first wave off the tee Thursday at 10 a.m. CDT (8 a.m. Palo Alto time) at the Stanford University golf course in the hills overlooking the Stanford campus. The historic course, built in 1930 and renovated in 1998, will play to a par of 71 and reports from the course on Thursday during the practice round had the primary cut of rough measuring over three inches in some spots.

The Lady Tigers are ranked 19th in the country and are the seventh seed in the West Regional. The rest of the field in seed order with Golfstat rankings in parenthesis are: UCLA (1), SEC Champion Alabama (6), Arizona (7), Ohio State (12), Virginia (13), Stanford and LSU (19).

Nine of the teams are ranked in the Top 25 in the country, the most of any of the three regionals.

LSU is hoping the West is good for them as it was last year when they played in the West Regional in Tempe, Ariz. LSU shot three-under par over the final 36 holes and finished third in the event to easily qualify.

“We are excited to be out (West) again,” said LSU Coach Karen Bahnsen. “The girls are excited about playing and we look forward to the opportunity to qualify for the national championships.”

The Tigers will rely on four players who have regional tournament experience: All-SEC first-team selection junior Megan McChrystal, All-SEC second-team choice sophomore Tessa Teachman, sophomore Jacqueline Hedwall and junior Amalie Valle. McChrystal and Valle will be trying to take the Lady Tigers to the championships for the third time in as many years in their careers.

The fifth member will mark her first team appearance this season, although she did play as an individual at the Tiger-Wave Golf Classic in New Orleans. Nicole Crochet, a junior from Harahan, La., will replace freshman Mary Michael Maggio in the lineup as she continues to rehab from the shoulder surgery that she had between semesters.

“Nicole is ready for the challenge,” said Bahnsen. “T he team has a lot of confidence that she can be a big help to us during the three days.

“I’ve been here before for events and this is really a great golf course,” the veteran coach said. “We are excited about playing the course. The fairways are narrow but the greens are very fair. The girls liked it a lot in the practice round (Wednesday) and we hitting the ball well. The weather is supposed to be good, but there will be some wind so hopefully it will be good for us to play early (Thursday). We are ready to get started.”

In the 10 a.m. wave, LSU will be with the eighth seed California and ninth-seed Texas A&M.

Tulane is the other Louisiana team to make the NCAA regional round and they are in the East Regional as the 11 seed.

Live scoring for the NCAA West Regional can be found at LSUsports.net through Golfstat.com. Updates during the round will be available at Facebook at LSU Women’s Golf and twitter @lsuwomensgolf. The twitter site for the tournament is @WestRegionals.