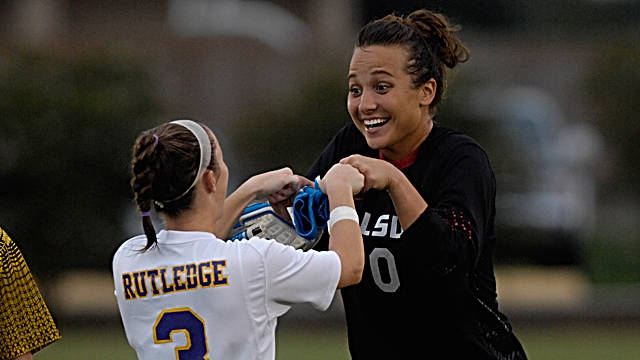 BATON ROUGE – While LSU junior goalkeeper Mo Isom has been honored throughout her career for her outstanding performance on the soccer field, she was recognized for her performance in the classroom on Tuesday as a recipient of the 2010 Wilma Rudolph Student-Athlete Achievement Award.

The award is presented each year by the National Association of Academic Advisors for Athletics and has been instituted to honor student-athletes who have overcome great personal, academic and emotional odds to achieve academic success while competing in intercollegiate athletics.

Isom will be presented with the award at the awards luncheon at the N4A National Convention being held on the afternoon of Saturday, June 12, in Salt Lake City, Utah.

The Marietta, Ga., native has overcome tremendous adversity during her collegiate career after her father, John Isom, committed suicide on Jan. 3, 2009, following her freshman season and she was involved in a horrific car accident on Nov. 25, 2009, following her sophomore campaign that kept her out of LSU’s offseason strength and conditioning program for four months.

“This is the most meaningful award I’ve ever received,” Isom said. “It’s an honor because this award does not have anything to do with athletics. It has everything to do with character, strength and perseverance. It was a nightmare for me in 2009, but God blessed me with the strength I needed to fight through the worst time of my life. I was left so broken with everything that had happened in my life.

“I’m so proud to represent this program and this university. It’s such an honor for me to be nominated for this award, much less win it. If it weren’t for LSU, I wouldn’t be where I am today. It’s been with the help of my coaches and teammates, of the support staff we have here, of my amazing family, of our wonderful God and of all the people who have helped me along the way.”

In addition, Isom was also this year’s recipient of the Eye of the Tiger Award presented in February at the annual Tiger Athletic Foundation Academic Excellence Gala.