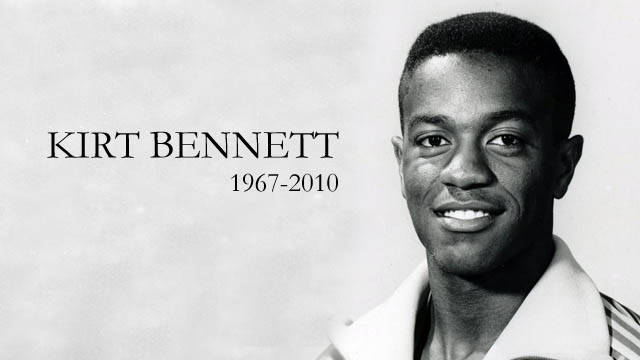 BATON ROUGE – Kirt Bennett, LSU track and field alumnus, former LSU student government president and one of Baton Rouge’s most beloved community leaders, died May 3 after suffering a stroke. He was 42 years old.

A three-year member of the LSU track and field program from 1986-88, Bennett lettered for the Tigers in 1988 while competing in the shot put, weight throw and hammer throw.

Most recently, Bennett was among the more than 100 alumni present for the inaugural LSU Track & Field Team Awards and Alumni Recognition Banquet held April 16 at the Crowne Plaza Baton Rouge as part of the LSU Alumni Gold weekend honoring members of the program both past and present.

Bennett worked as a financial representative for Northwestern Mutual Financial Network with more than 1,000 clients with the LSU community alone. He was known for his work with youth and his interest in politics, as well as his family. He is survived by his wife, Denise, and three children, John, Christiana and Benjamin.

“The LSU and Baton Rouge communities have lost a tremendous individual with the passing of Kirt Bennett,” said LSU head coach Dennis Shaver. “Kirt’s work speaks for itself about how devoted he really was to his family, his university and his community. Kirt worked to serve others each and every day, and I don’t know if we can begin to measure the impact he made on the lives of other people.

“Our thoughts and prayers are with his wife, Denise, and their three children during this difficult time. We in the LSU track and field family mourn with them with the loss of such a great man.”

Bennett was a well-known student leader during his time at LSU. He served as only the second African American student government president in LSU history in 1990-91. He was also selected for Leadership LSU, a prestigious program that helps develop LSU’s student leaders into lifelong community leaders. He graduated from LSU in 1991 with a bachelor’s degree in political science and also held a master of public administration degree from Southern University in Baton Rouge.

Bennett was the first executive director of the Young Leaders’ Academy, which he founded in 1993. The Young Leaders’ Academy is a Baton Rouge organization that works to develop the leadership abilities of young African American males. Under his tutelage, the academy made two appearances on the Oprah Winfrey TV show, and Winfrey even awarded the academy a $50,000 grant for its work.

LSU great and NBA superstar Shaquille O’Neal was so inspired by Bennett and his young leaders that he surprised them on the Oprah Winfrey Show in 2000 with a special gift of 35 new computers.

Perry Franklin, Bennett’s longtime friend and current president of the LSU’s A.P. Tureaud Black Alumni Chapter, said Bennett excelled in everything he did, from mentoring youth, to serving as an insurance professional, to being a husband and father.

“He was a brilliant visionary and had a gift of bringing in new sponsors and corporate underwriters to underwrite the Young Leaders’ Academy,” Franklin said. “He grew the organization from a concept to a reality– and to this day, the organization is making a marked difference for the young men entrusted in its care. He continually made all of Baton Rouge proud with his spirit for life and dedication to the improvement and progression of young African American boys and ultimately the entire community.”

For more information on the Young Leaders Academy, visit http://www.youngleaders.org.

Bennett’s interest in politics led him to run for office, first, as a Democrat for a state house seat in 1993, and again as a Republican for lieutenant governor in 2003. He then served as delegate for Louisiana at the Republican National Convention in 2004. In 2008, Gov. Bobby Jindal appointed him to the Greater Baton Rouge Port Commission.

Bennett was named to the Baton Rouge Business Report’s Forty Under 40 list in 1994, and he delivered the keynote address at the LSU commencement ceremony in August 1997.

Services for Bennett will be held on Saturday, May 8, at St. Joseph Catholic Cathedral in downtown Baton Rouge. Visitation will be held from 9-11 a.m. A funeral mass will be held beginning at 11 a.m., with burial immediately following.