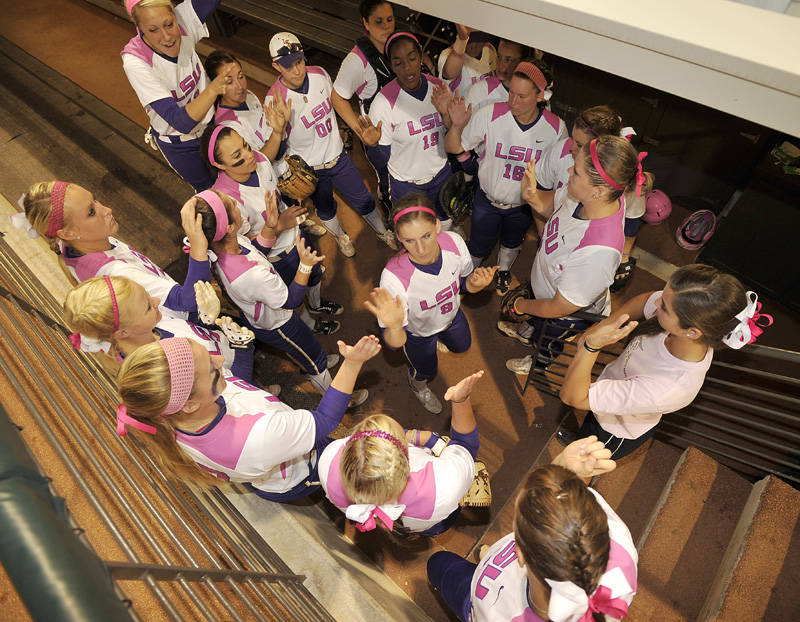 Kirsten Shortridge, CF, Sr., Keller, Texas
Shortridge posted a trio of multi-hit efforts en route to a .636 batting average and added four stolen bases highlighted by a steal of home plate as LSU earned a series win over No. 8 Georgia. She set the tone with a leadoff single, a steal and came around to score on an Ashley Langoni RBI-single during the first inning of game one. From her centerfield post, Shortridge also hauled in a career-best seven putouts ranging from a diving catch on a sinking line drive in front of her to tracking down a ball on a full sprint to the warning track in left centerfield. The Keller, Texas native sparked a four-run sixth inning comeback in the second game and gave the Tigers a 4-3 lead with a heart-stopping steal of home on the toss back to the pitcher. She joins Dee Douglas as the only players in program history to record 40 steals in a season. In the series finale, Shortridge notched a 3-for-4 performance and ripped a RBI-single in the seventh inning as LSU almost overcame a 3-0 hole.

Cody Trahan, P, Sr., Little Cypress, Texas
Trahan returned to the circle with a vengeance after missing the Kentucky series. She mowed down 11 of the first 13 batters she faced and limited the high-octane Georgia offense to one run on five singles to end the Bulldogs league-high 15-game winning streak. The Little Cypress, Texas native took the ball in the series finale and once again kept Georgia in-check. She racked up eight strikeouts against zero walks and held the Bulldogs to one earned run on six singles. Trahan was handed the tough-luck 3-2 loss as UGA scored two runs aided by an Ashley Langoni dropped fly ball with two outs in the third inning.

Rachele Fico, P, Fr., Oxford, Conn.
Fico earned a relief victory in her lone appearance during the three-game set and allowed the Tigers to earn a series win against No. 8 Georgia. She tossed 4.2 frames of two-hit relief and notched six strikeouts against one walk as LSU turned a 3-0 deficit into a 5-3 comeback triumph. The Connecticut native retired 10 of 12 batters she faced and allowed the high-octane Bulldogs to get only one runner into scoring position.

Notes on the Tigers
LSU maintained sole possession of third place in the overall SEC standings and notched a series win over No. 8 Georgia in-front of the ESPN national audience. It marked the second time since the 2004 season that the Tigers have won the three-game set over the Bulldogs. The Tigers also raised $1,935.50 to benefit the Baton Rouge Affiliate of Susan G. Komen for the Cure® during its second annual ‘Swing for the Cure’ event. LSU started the series strong and grabbed a 5-0 lead through three innings of game one. In the process, Rachel Mitchell became the program’s all-time home run leader with a two-run dinger in the second inning. The historic long ball for Mitchell was the 33rd of her career as she eclipsed three-time All-American Leslie Klein. That would be more than enough run support for Cody Trahan, who responded with a masterful performance in the circle after missing the Kentucky series. The senior right-hander sat down 11 of the first 13 batters she faced and limited UGA’s high-octane offense to one run on five singles. The second game of the series saw LSU wash away a 3-1 hole sparked by a four-run sixth inning. A Courtney Hollier solo homer down the left field line jumpstarted the rally with one out. After a Mitchell sacrifice fly tied the score at 3-3, Kirsten Shortridge provided the heroics with a thrilling steal of home plate on the toss back to the pitcher. Shortridge joined Dee Douglas as the only two players in program history to record 40 stolen bases in a season. Rachele Fico fired 4.2 frames of two-hit relief and mowed down 10 of the last 12 batters as Georgia put only one runner in scoring position versus the freshman. LSU almost doubled its pleasure in the series finale and platted two runs aided by a Shortridge RBI-single in the seventh inning before falling 3-2. The Tigers wrap up the regular season with a weekend series at No. 16 Tennessee. Saturday’s doubleheader is slated for an 11 a.m. CT start followed by a 1 p.m. CT single-game on Sunday. Games one and three of the series will be televised by ESPN and ESPNU.