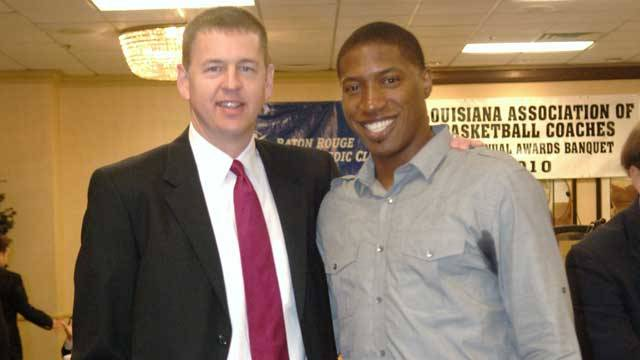 BATON ROUGE — LSU senior Tasmin Mitchell was named the state major college player of the year here Saturday at the annual banquet of the Louisiana Association of Basketball Coaches held at the Embassy Suites.

Mitchell won the Pete Maravich Memorial Award, honoring Louisiana’s Major College Player of the Year. This season Mitchell was a second team All-Southeastern Conference, first team NABC and USBWA All-District and first team All-Louisiana selection, while averaging 16.8 points and 9.4 rebounds and shooting 34.0% behind the three-point line.  He had nine 20-point games, 12 double-double games and scored in double figures in 27 of 31 games.  His single game highs were 38 points (SEC high), 18 rebounds and 4 steals.

Also the Bob Pettit Award, which is given to Louisiana’s Professional Player of the Year, was presented to Marcus Thornton of the New Orleans Hornets.  In his first year in the NBA, the former LSU star was a second team All-Rookie selection while averaging 14.5 points (4th among NBA rookies) and shooting 37.4% behind the three-point line.  Thornton had 20 or more points in 21 games and had single game highs of 37 points, 9 rebounds and 7 assists.

LSU signee Matt Derenbecker was named the Class A High School Player of the Year as chosen by the LABC.

A former LSU star player, along with a long-time Louisiana sportswriter, were the major honorees at the 36th annual Awards Banquet.

Inducted into the Louisiana Basketball Hall of Fame was Ricky Blanton of LSU.

The other major honoree was the long-time sports editor of the Ruston Daily Leader, O.K. “Buddy” Davis, who won the LABC’s prestigious Mr. Louisiana Basketball award.  This award is given annually to someone who has made a significant, long-term contribution to the game of basketball at any level in the State of Louisiana.

Blanton was a two-time honorable mention All-American and a two-time All-Southeastern Conference and All-Louisiana selection while at LSU in the 1980s.  He was named to the SEC All-Tournament team in 1988 and was an NCAA Southeast Regional All-Tournament pick in 1986.  He finished his career as the eighth leading scorer and tenth leading rebounder in LSU history, with over 1,500 points and 750 rebounds.

Blanton averaged 20.3 points, 8.2 rebounds and 4.59 assists and had a 40.4% three-point field goal percentage as a senior, in addition to averages of 17.0 points, 8.8 rebounds and 3.57 assists as a junior.  He helped lead LSU to two 20-win seasons and four NCAA Tournament appearances, including the Final Four in 1986.  After college, he was selected by the Phoenix Suns in the second round of the 1989 NBA Draft.

Davis has been the sports editor of the Ruston Daily Leader since 1970, where he has played a major role in telling the story of basketball and other sports in Louisiana for 40 years.  He has covered the careers of athletes such as Karl Malone, Paul Millsap, Willis Reed and many others who starred for Louisiana high school and college programs before moving on to the professional ranks.  He has also served as a voter for national basketball polls and awards, covered 13 women’s Final Fours, 26 NCAA women’s tournaments, three men’s NIT and two women’s NIT tournaments.

Davis has won more than 100 awards in statewide and national writing contests and has written an estimated 42,000 sports stories over his career, at least 10,000 of which have been about basketball.  In 1995 he was named the Louisiana Sportswriter of the Year by the National Sportscasters and Sportswriters Association, and in 2009 he received the Distinguished Service Award in Sports Journalism from the Louisiana Sports Writers Association.

Coach Kerry Rupp of Louisiana Tech received the Tommy Joe Eagles Memorial Award as Louisiana’s Major College Coach of the Year.  In his third year he led the Bulldogs to a fourth place regular season finish in the Western Athletic Conference and the national quarterfinals of the CollegeInsider.com Tournament with a 24-11 record (the school’s most wins in 25 years).  For the first time in 19 seasons, the Bulldogs received votes in the AP Top 25 poll.  They also sported a 10-game wining streak for the first time in 25 seasons and earned the school’s first postseason birth in four years.

Derrick Parker of LSU-Shreveport received the Louisiana Small College Player of the Year award after being named a first team NAIA All-American and All-Louisiana selection and a unanimous pick as the Gulf Coast Athletic Conference Player of the Year, while averaging 19.3 points, 11.8 rebounds and 2.16 blocks per game.  Coach Chad McDowell of LSU-Shreveport, who was named the Louisiana Small College Coach of the Year, directed the Pilots to a No. 9 ranking in the final NAIA regular season national poll, the GCAC regular season and tournament championships and the No. 5 seed in the NAIA Tournament with a 27-6 record.

Darrell Williams and Coach Tommy Smith of Delgado were honored as the Louisiana Junior College Player and Coach of the Year, respectively.  Williams averaged 17.2 points and 4.3 assists and was the Most Valuable Player of the Miss-Lou Conference Tournament.  Coach Smith, who was also the MLC Coach of the Year, led the Dolphins to their first MLC Tournament championship and to a No. 3 seed in the NJCAA Region 23 Tournament.