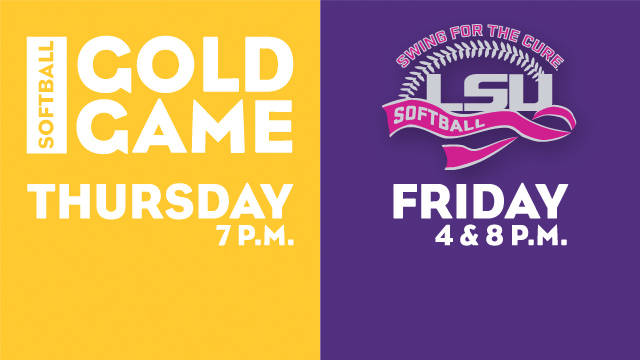 BATON ROUGE – The No. 17 LSU softball team concludes its regular season home slate on the national state as No. 8 Georgia visits Tiger Park for a three-game series.

The two teams will meet in a Thursday single game at 7 p.m. on ESPN followed by a Friday doubleheader slated for 4 p.m. and 8 p.m. with the series finale being televised by ESPN U. Live video for game two of the series will be available in the Geaux Zone on LSUsports.net.  Beth Mowins and Jessica Mendoza will anchor the ESPN coverage.

“It’s going to be a fantastic next two days at the ballpark,” head coach Yvette Girouard said. “We’re honored and thrilled to be able to showcase Tiger softball and our facility to the ESPN national audience. Georgia comes in as a very good ball club. They went to the Women’s College World Series last year and are starting to get hot again at the right time. We’re anxious to play them.”

LSU (39-10, 17-5 SEC) heads into the series in sole possession of third place in the overall SEC standings and a game behind Alabama in the western division race. The Tigers have won 10 of their last 11 games sparked by a trio of sweeps over Mississippi State, Arkansas and Kentucky.

Kirsten Shortridge has recorded hits in 40 of 49 games and her team-high 70 hits are tied for third in the SEC rankings. She also ranks among the SEC’s Top 8 in batting average [.407], runs scored [44], stolen bases [38] and multi-hit games [23]. The Tigers are 21-2 when Shortridge registers a multi-hit effort.

Rachel Mitchell checks in with a .349 average and has popped six home runs to go along with a team-best 40 RBIs. She has picked up 27 of her RBIs since March 13 to surge into a seventh-place tie in the SEC rankings. LSU has won 11 of 12 games when Mitchell knocks home multiple runs.

Anissa Young and Ashley Langoni have chipped in 35 and 31 RBIs, respectively. The duo also have combined for 16 homers, while Juliana Santos has started to heat up and gone 7-for-19 at the plate during her last eight games.

Jessica Mouse, reigning SEC Player of the Week, boosted her average by 38 points during the Kentucky series. She cranked five doubles and reached base during her last eight plate appearances of the series.

“I’m just so happy for Jessica because she comes out here every day and you get the same thing out of her day in and day out,” Girouard said. “She’s consistent, works hard in the classroom and works hard on her hitting. Defensively, I’m astounded by how really good and consistent she is. It’s amazing getting the chance to watch her play.”

Cody Trahan, Rachele Fico and Brittany Mack continue to anchor the staff with the SEC’s lowest and nation’s fourth-best ERA at a 1.34 ratio. The trio also ranks individually among the SEC’s Top 3 and have limited opponents under three runs in 38 of the squad’s 49 games.

Trahan, who missed the Kentucky series, returns to the circle for the Georgia series. She sports an 11.2 mark to go along with a 1.14 ERA and has yielded only 15 runs during 92.0 innings of work. The Little Cypress, Texas native also compiled an impressive 93 strikeouts against 14 walks.

Fico has turned in a 16-4 record with a SEC-leading 1.13 ERA and notched back-to-back SEC Pitcher of the Week awards. She has surrendered only two earned runs in her last 35.1 frames after her setback at Alabama and has posted a 2-0 week with a save during each of her last two weeks of action.

Mack is 9-3 with a 1.55 ERA and has won eight of her last nine decisions. She fired five innings of shutout ball in the middle game of the Kentucky series before being touched up for a solo homer, three infield hits and a pair of walks during the sixth inning before giving way to Fico.

“We’re back at full strength except for Shortridge a little bit, and hopefully at some point we’ll be able to throw her again,” Girouard said. “We’ve got some very good options in Trahan, Mack and Fico. I thought Rachele and Brittany had great weekends at Kentucky and I’m looking forward to seeing how they’re going to throw against the Bulldogs.”

Georgia (40-8, 17-6 SEC) is second in the SEC with 80 home runs on the season. The Bulldogs have four players in double digits homers highlighted by Brianna Hesson’s 12 dingers. Alison Owen has compiled a 10-0 mark with a 1.92 ERA, while Erin Arevalo has garnered an 18-5 record with a 2.30 ERA in the circle.

“There’s no question we need to keep the ball in the park. That’s going to be a huge key for us because Georgia does live by the home runs,” Girouard said. “They’re also very quick on the bases and steal a lot. We can’t make too many mistakes and if we do make mistakes, we better make sure we limit them with nobody on-base.”

All three games of the UGA series will be broadcasted live on ESPN 104.5 and The X 104.9 FM live in the Baton Rouge area with Patrick Wright and Kent Lowe set to call the action. Live stats also are available in the Geaux Zone on LSUsports.com along with live in-game updates via http://twitter.com/lsu_softball.

Fans are encouraged to wear Gold for Thursday’s game and the first 500 fans will receive white mini helmets with the LSU softball sculpture logo.

LSU will wear pink jerseys during Friday’s series finale as part of its 2nd annual Swing for the Cure event to benefit the Baton Rouge Affiliate of Susan G. Komen for the Cure®. A silent auction with a variety of LSU memorabilia and donation tables will be set up throughout Tiger Park.