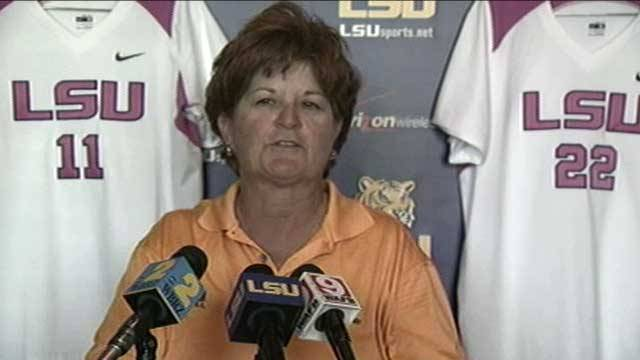 BATON ROUGE – Head coach Yvette Girouard met with the media Tuesday to preview the upcoming series against No. 8 Georgia at Tiger Park. The series starts with a Thursday single game at 7 p.m. on ESPN followed by a Friday twin bill slated for 4 p.m. & 8 p.m. with the series finale being televised by ESPNU.

Below are Girouard’s quotes from the media session.

Opening Statement
“Well, in trying to be apropos with what’s going on this weekend, Thursday will be the Gold Game. Therefore, I’m wearing gold and would appreciate it if the Tiger fans would wear gold to be in the national audience of ESPN at 7 p.m. We’re very excited that they’re picking us and highlighting that game for a nationwide audience to showcase our beautiful facility. We’ll turn around on Friday and it will be an awfully long day at the ballpark. The first game starts at 4 p.m., and then the next game is at 8:00 p.m. and that will be the Pink Game. You can see that we have the pink jerseys here, new Nike pink jerseys. Georgia also will be in pink, and that game will be at 8:00 p.m. on ESPNU.

There’s probably been no family now that hasn’t been affected by this dreaded disease [breast cancer]. Within our own organization, we have a few. My best friend who was my secretary at ULL is battling now, and it’s a huge struggle for her. We found out this weekend that [Assistant Coach] Kristin Hobbs’ mother has been diagnosed, so it really touches us very close. They keep telling us they’re very close to a cure, and it can’t come fast enough for all of us involved in this.

Previewing the Georgia series, Georgia, as always, comes in here highly ranked. I think a lot of people saw them last year at the Women’s College World Series. They come in with a lot of confidence. That’s part of their M.O., their bravado on the field. They’re definitely about the long ball; they’ve hit a ton of home runs. Their ballpark is much smaller than our ballpark. Nevertheless, they hit them on the road also. I’m not going to say they have no offense, but they very much rely on the ball going out of the yard. They play very good defense, they run the bases well, and they pitch very well, so we’ve got our work cut out for us. Last year we went there and lost. I think the game was 6-5 and then the series got rained out where it just a monsoon in Georgia for an entire weekend. We had the momentum in the second game and thought we were going to win the game, but it was called due to the weather. I just got off the phone with them. They’re trying to keep their kids in class and they’re going to charter in
Thursday morning and practice on our field for the game that night. Like I said, they always present a huge challenge to us.

We have a chance here to finish really well. The SEC championship in the Western Division hasn’t been decided yet. We still have a chance to win some championships. I thought we played very well in Kentucky. It was kind of a tired ball club yesterday after we didn’t get home until 11:30 p.m. on Sunday night.

Obviously, by the good weekend, we had SEC Players of the Week. Jessica Mouse had a phenomenal weekend, made some excellent defensive plays that don’t show up in the scorecard, but probably saved us some runs. She plays tremendous defense all the time and had a phenomenal weekend at the plate. Rachelle Fico was named Pitcher of the Week. We took two of the three highest SEC honors this weekend, and there are none more deserving than these two ladies. We played good defense and hit the ball well. Rachel Mitchell tied the school record for home runs, and [Kirsten] Shortridge looks like she’s back on track. We changed the lineup again and went back to the original lineup we used 80 percent of the season. We’ll probably stick with that from here on in. We tried to get the most out of Juliana Santos and Courtney Hollier, so we’re trying to squeeze the most assets out of players in lineup as we can.”

On the importance of the upcoming series …
“I think the upcoming schedule will determine a lot of things. We have no clue about NCAA Regionals until they announce them that night, but I think if we take care of business in the next two series, that should certainly help us in our bid [to host] a regional tournament. Our facility is on-par with anything else in the country. We’d like to take care of business and take away the guest work there. This is the most critical stretch since that back-to-back road series [at Florida and at Alabama]. That was a brutal road trip that not many teams in the country would have survived.”

On Rachele Fico …
“She’s mature beyond her freshman year in the circle. She’s very astute about the game and she understands it, so the mental game is already there for her. She knows the fanfare that has come with her, but her greatest asset is her maturity. Her mental game is solid.”

On Cody Trahan …
“Cody is an excellent young woman that has represented this program very well in the classroom and in the community. She has never given this coaching staff any problems, except for one. She needs to buy 10 alarm clocks. Let’s just say she was late at the wrong time. She was late so we left her home. She will pitch this weekend.”

On this weekend’s series being televised …
“We want to beg and urge our fans to please show up. A lot of times when a game is on television fans stay home to watch because they can see it better and they’re in the comfort of their own homes, but we also want to have a good showing for the national audience. We realize that Friday is an unbelievably long day for everyone. There are a lot of demands with TV sometimes, but we welcome that. We always said that was the last horizon to get more national TV coverage, and we’re getting that now. This is the last series at Tiger Park unless we get a regional here so we beg and plead our fans to show up. Our fans have been tremendous all year, and keep in mind you get to see a College World Series participant that returns a lot of players from last year’s team.